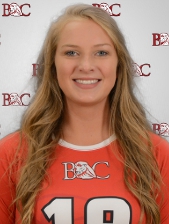 DAYTON, TN (WLAF) – Since the last time Bryan volleyball has seen Southern States Athletic Conference challenger Martin Methodist College (Tenn.) back in mid-September (L-25-23, 22-25, 25-23, 18-25, 11-15), the RedHawks have gone 12-2 and wouldn’t slow their momentum in the Lion’s regular-season finale Thursday night. Martin Methodist wasn’t the only team on a roll though, seeing that Bryan has closed out their regular-season 20-12 overall to secure 3rd in the Appalachian Athletic Conference North Division standings.  The Lions even entered Thursday’s Halloween face-off on a four-game winning-streak. The battle between the two teams was decided early when Bryan’s slow start in set one left the Lions trying to fight from behind the rest of the match. The RedHawks soared ahead 25-12 in the opening frame and managed to fend off the Lions in a close set two 25-23 before sealing the sweep 25-12 to improve to 19-6 overall. While Bryan’s season enters conference tournament play, Martin Methodist still has four matches on the slate before post-season action.

The Lions trailed the RedHawks 7-3 to start set number one and would see their last opportunity to keep close fade away when Martin Methodist rallied for an 8-0 that turned a manageable 14-10 margin into an overwhelming 22-10 difference. Paige Randolph tallied a kill, Emalie Hicks produced a pair of kills, and two errors committed by the RedHawks supported Bryan in reaching 15 before Martin Methodist finished the set 25-15.

Six ties and an extremely tight showdown in set two made for an entertaining display. The scored was leveled 9-9, but the RedHawks delivered five straight points to force a Lion’s timeout. The second to regain focus was all Bryan needed to chip away at the deficit before making it a one-point ballgame at 16-15. Despite the Lions constantly answering, the RedHawks would return the favor to keep just enough room. With Martin Methodist out in front 22-18, it looked as if the set would end, but Bryan applied pressure a solo block and kill by MyKayla Hampton while forcing an attack error by the RedHawks to make the count 22-21. Clutch kills by former Campbell Lady Cougar Anna Cain  (top photo) and Gigi Ford weren’t enough, as Martin Methodist took the set 25-23 to lead 2-0 in the contest.

The sting from set two’s ending was difficult for Bryan to shake off as they entered the final frame. Martin Methodist took advantage of the Lions’ state and surged ahead 10-2. The early struggle led to the RedHawks extending their lead to 12 points at 21-9 before capping the set 25-12 and match 3-0.

Hicks and Anna Owens led the Lions on the attack with 8 and 7 kills, respectively. Following were Ford and Cain with four kills apiece and the duo of Hampton and Janie Smith with three kills each. Sydney Pierce was the assist’s leader with 14 while Jaleigh Rogan trailed with 10. Three Lions notched double-digit digs: Rheagan Kean finished with a team-high 16, Ford was next with 12, and Rogan completed a double-double by compiling 11. Bryan’s three total blocks came off solos dealt by Hampton, Ford, and Smith.

With the regular-season concluded, the Lions will turn their attention to the upcoming AAC tournament, which will take place November 13-16 in Kingsport, Tennessee at the MeadowView Marriott Conference Resort & Convention Center.

ATHENS, TN (WLAF) – Bryan volleyball’s dominating performance Tuesday night marked their fourth straight sweep, as the Lions blanked Appalachian Athletic Conference rival Tennessee Wesleyan University 3-0 (25-17, 25-23, 25-22). Bryan improved their overall record to 20-11 and AAC record to 13-7, which is good enough for the Lions to seal a top-3 spot in the conference’s north division standings. At the bottom of the north division is Tennessee Wesleyan now at 6-19 overall and 6-14 in conference play.

A kill by Smith on the opening point of set number one provided the Lions with a lead that was held for the entire frame. The rally came quick and early, as the Lions clawed ahead of the Bulldogs 5-1. Tennessee Wesleyan managed to cut the deficit to three at 7-4, but Bryan’s key run was created at 10-6 when they sprinted in front 17-7. The comfortable separation was all the Lions needed to overwhelm the Bulldogs 25-17.

The Lions had a positive start to the second set thanks to pair of attack errors committed by the Bulldogs and a combined block delivered by Ford and Smith. After the 3-0 lead, Tennessee Wesleyan fought back and leveled the count 4-4. The set remained tight, as both sides totaled 11 tied points. Bryan led 13-9, but the home team evened the score 14-14 following a 5-1 run. With the pressure high and the score deadlocked 20-20, Rogan set up Ford and Owens for back-to-back kills. Unfortunately, the Bulldogs slowed the Lions’ momentum and scored three unanswered to take control 23-22. Bryan kept composure and posted clutch kills from Randolph and Ford and capped the set with an ace from Kean to prevail 25-23.

Despite another close set in the third, a major contributor to Bryan’s advantage was Tennessee Wesleyan’s eight total service errors. The ties came early at 3’s, 6’s, 7’s, and then 12’s midway through the frame. The Bulldogs scraped up brief leads at 13-12 and 14-13, but the Lions stormed back with a kill by Owens to tie the count and regained an edge that was maintained for the rest of the set. Two attack errors by Tennessee Wesleyan moved Bryan’s lead to 16-14. The final tie was at 16-16, but then a game-changing 4-point swing was all the Lions needed to leave the Bulldogs behind. Bryan outlasted Tennessee Wesleyan 25-22 to win in sweeping fashion, 3-0.

Southern States Athletic Conference foe Martin Methodist College (Tenn.) is traveling to Bryan this Thursday, Oct. 31 for the Lions’ last regular-season match of the year at 6:30pm. The RedHawks played host to the Lions back in September and escaped Bryan in a five-set thriller, so Bryan will be looking to get even in the non-conference showdown. Martin Methodist currently owns a notable overall record of 18-6.