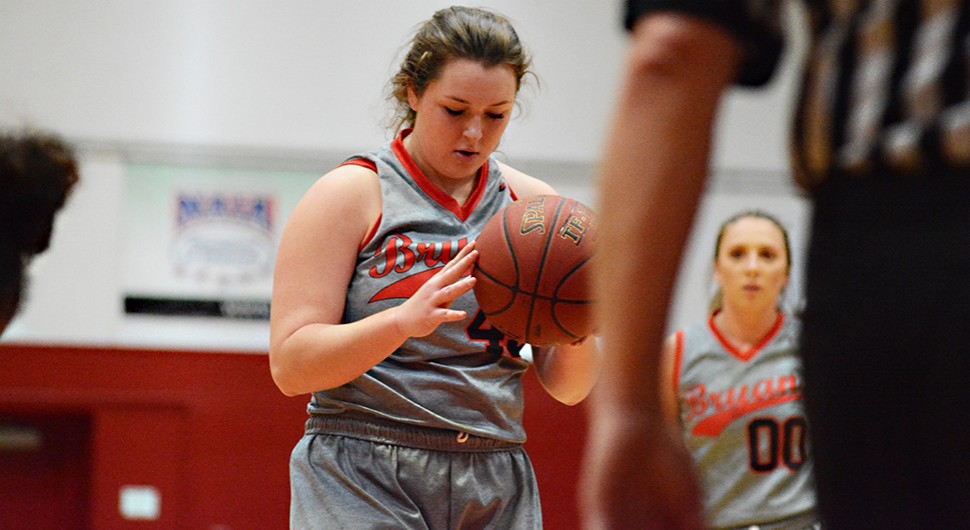 While Martin Methodist narrowly edged Bryan in shooting 44.9 percent to 44.3 percent and outrebounded the Lions 39-30, the Lions limited their turnovers to 14 compared to the RedHawks’ 19 and took advantage on their frequent trips to the foul line, making 22-of-29. Martin Methodist attempted just 11 free throws and made only nine.

Through the final two quarters, the Lions and RedHawks played an even game with the two sides each scoring 20 points in the third frame and 21 in the final frame. The difference-maker was Bryan’s efficient first quarter where the Lions built a comfortable lead that wasn’t surrendered until midway through the third quarter. The first six points of the game were scored by Bryan, as Hennessee dropped in her first collegiate points of her career on a quick move in the post. Hennessee made the front side on a trip to the foul line, and Cain followed with a strike from downtown. Through the first four minutes, the Lions allowed the RedHawks a mere three points while controlling a 10-3 lead. Bryan’s first double-digit lead came only moments later when Ludy drove to the basket for a successful layup, placing the Lions in front 16-5. The squad’s largest gap of the period was 14 points, coming at 23-9 and then again just before the end of the quarter at 28-14. Martin Methodist scored from behind the arc in the final seconds, making it an 11-point ballgame at the beginning of the second quarter, 28-17.

The greatest lead secured by Bryan in the outing was towards the start of quarter number two at 34-19 and again at 36-21 with six and a half minutes on the clock. For the next four minutes, the RedHawks soared past the Lions with a 12-0 run that slimmed the deficit to just three points near the three-minute mark, 36-33. Three free throws and an inside connection by Kassner and two more foul shots tallied by Cain helped push Bryan ahead 43-36 at the break.

Martin Methodist opened the third quarter with a 7-0 run to tie the game at 43-43, which marked the start of a tug-of-war for control of the lead. Two other ties and a brief RedHawks’ lead ensued, but a pivotal and-one play completed by Hennessee was the last spark the Lions needed an advantage and hold onto it for the rest of the night. By the time the third quarter wrapped up, Bryan was back on top by seven at 63-56.

A bucket by Hennessee in the paint at 9:45 was the only two points put on the scoreboard through the first two minutes of the final period. A free throw made by Ludy at the eight-minute mark helped the Lions see their last double-digit edge for the rest of the game. Despite the RedHawks knocking on the door and forcing the lowest margin at 78-75 with one and a half minutes to play, the Lions ended any chance at a comeback because of a strong defensive effort, Hennessee scoring inside, and both Karli Combs and Kassner getting it done at the foul line in the final moments to help seal an 84-77 decision for Bryan.

Combs aided with five points, and Deandra Luna scooped in two points to wrap up the scoring for the Lions. Luna handed out a team-best four assists and corralled five rebounds. Hennessee also collected three assists, four boards, and a team-high four steals.

Bryan’s last out-of-conference action before opening up Appalachian Athletic Conference play is this weekend at the Union College Classic, hosted by fellow conference foe the Union College Bulldogs (Ky.) on Friday and Saturday, Nov. 1-2 in Barbourville, Ky. The Lions will meet with Alice Lloyd College (Ky.) on day one of the event with a 6pm tip-off followed by a bout versus Bethel University (Tenn.) on Saturday at 2pm. (WLAF NEWS PUBLISHED – 11/04/2019-6AM)