At 8 pm Friday night, a restaurant full of onlookers witnessed the Campbell County Sheriff’s Department SWAT Team execute a vehicle take down in the Shoney’s parking lot at Caryville. 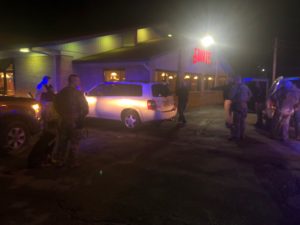 Campbell County Sheriff Robbie Goins, the CCSD SWAT Team and other CCSD officers began a narcotics investigation Friday morning at 10 am that led them to 33-year old Josh Brown of Knoxville this evening.

In the take down of the vehicle, officers recovered a large quantity of ice (schedule II narcotic) and marijuana (schedule VI narcotic).  During the course of the investigation, a large amount of currency was seized.  Several items, believed to be stolen, were also recovered.  Investigators continue processing the evidence, and more information will be released as it becomes available. 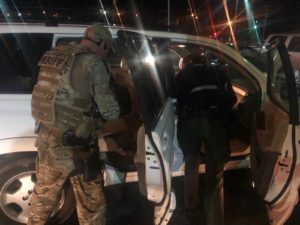 Sheriff Goins said, “Not only are we interested in combating the drug problem in Campbell County, but my department and I will do what’s in our power to prevent illegal narcotics from entering our communities.”

UPDATE:  Brown remains housed in the county jail this morning and is expected to be arraigned later today.  (WLAF NEWS PUBLISHED – 02/04/2019-6AM)