A west La Follette man went to jail after a routine traffic stop, because he gave a false name.

Campbell County Deputy Isaac Phillips pulled a car over on the Skyway Bridge at Campbell County High School last Wednesday afternoon, and during the stop, as he writes in his report, the man did not possess an ID.

The WLAF News Team pulled up on the scene of the stop, and Phillips explained that the young man told him his name was Justin Pennington with a date of birth of May 24, 1991.  Phillips soon learned that the man is actually 28-year old Brandon Robert Treadway of West Forrest Street. 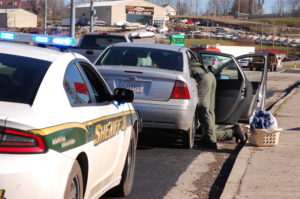 Traffic was down to one lane during the traffic stop

Treadway, according to the report, told Deputy Phillips he was Pennington, because he thought he had an outstanding warrant for his arrest.  It turns out that wasn’t the case.

He also fessed up to Phillips that he also had a Suboxone strip on him.

Treadway was charged with criminal impersonation and possession of a schedule III controlled substance.  This was the 10th time Treadway has been booked into the county jail.   He was released on a $1,000 bond.   (WLAF NEWS PUBLISHED – 01/17/2019-6AM – PHOTOS COURTESY OF WLAF’S CHARLIE HUTSON)