Anthony “Moose” Roberts is this week’s most wanted on Crime Stoppers.

Roberts, an offender believed to drift in and out of the county, is believed to be back in Campbell County. Law enforcement officials say he was last seen in La Follette, but he is not getting out much. 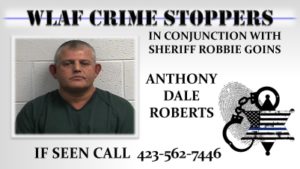 Roberts is currently wanted for a violation of probation. His original charge, which was resolved by placing him on probation, was sale and delivery of a schedule II controlled substance, according the reports.  The 50-year old Roberts has been booked into the jail nine times since 2000; most recently in 2012 on a domestic violence charge.

One sheriff’s official notes that Roberts has been on the run for about a year.  He’s described as actively evading arrest.

“Please do not approach anyone you see on Crime Stoppers,” said Campbell County Sherriff Robbie Goins. “Call the sheriff’s department and report where they are. We don’t want anyone to try to apprehend these people, just tell us where they are if you see them.”  (WLAF NEWS PUBLISHED – 01/17/2019-6AM)