“When a big 18-wheeler comes rolling by here, it’s like the Wild, Wild West with big clouds of dust,” said David Bales, owner of Bales Buick – GMC.  TOP PHOTO:  Thick dust covers every vehicle on the Bales lot and has for several days

Bales has a lot full of beautiful new cars and trucks.  All covered in ground up pavement dust.

La Follette Mayor Mike Stanfield tells WLAF, “We run our sweeper each night, and the paving crew also runs a sweeper, but the particles of the ground up asphalt are so small, that it’s impossible to get it all up.  We’ve had a lot of complaints.” 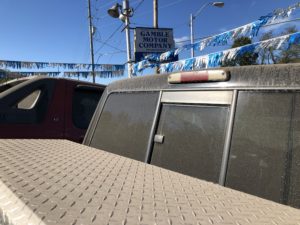 Bales explained that you must wash this off, because if it stays on too long, it will be very tough to remove.

Stanfield explains that the paving project was to have actually begun on October 1st.  He estimates that it will be early December before the project’s completed.  Stanfield adds that the asphalt grinding and laying of new asphalt will stretch from Stop Light 10, at Cumberland Avenue, all the way to Charley’s Pizza, at the southwest city limits.

Michael Hammons, owner of Logan’s Car Wash and a candidate for La Follette City Council, tells WLAF, “The dust is horrific.  Just take a look at Gamble’s Motors and JR’s Car lot. We’re having fewer people come in to the wash than what we should be with the beautiful weather. We’re down probably around 30% or more compared to what we should be.” 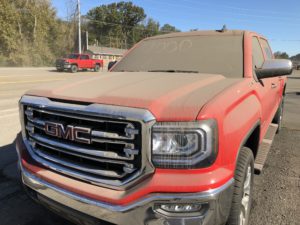