On the road.  Up 27 to 6.  The script for the Campbell football game at winless Gibbs was being followed to a T.  Until disaster struck in the third quarter; an injury to quarterback Landon Addington.Addington exited, and the game changed.  Campbell Head Coach Justin Price told WLAF’s Les Martin on the TCAT Postgame Report, “We didn’t respond very well when he (Addington) went down.  They (Gibbs) took all the momentum, and our defense could not stop their option game.”

TOP PHOTO:  Senior Cougar linemen 55 Tyler Hamblin and 53 Brandon Dison wait for the play call in the game at Gibbs.

“Anytime your leader, your quarterback, goes down, and the players don’t see him out there, it’s a mental game, and that’s high school sports and sports are so mental,” said Price.  He adds, “Our program will learn from this.  We have 13-days to figure it out before Powell (Thursday, 09/27).” 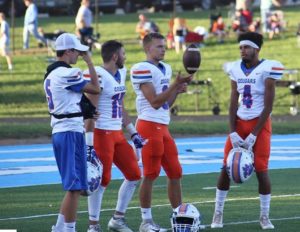 Cougars gather before warm-ups begin on Friday at Gibbs.   Landon Addington, with the ball, was injured in the second half of the game.

On today’s Pat Pebley Sports Report on WLAF, Pebley details that an MRI is pending for Addington.  He goes on to say that the initial prognosis is an MCL (knee) strain.  Right now it looks as if the senior signal caller could be out four to six weeks, and the rest of his career as a Cougar is in jeopardy.

Price has options.  Fans saw three of those in action Friday night at Corryton in Drew Jordan (#2), out of the Wildcat formation, as well as sophomore quarterback Joseph Paul (#7) and freshman QB Hunter White (#12).  Though he did not see any action Friday, sophomore Christian Tinch (#8) is another possibility for the 8th year head coach. 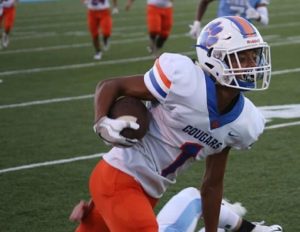 For the second time during the Price Era, the Campbell County Cougars have lost their starting quarterback to injury in a game against Gibbs.

In 2015, it was Zach Rutherford with a season ending injury-though he did play sparingly in the final game of the season.  Gibbs won the season opener on Pat Kerr Field that night by a final of 12 to 6. (WLAF NEWS PUBLISHED – 09/17/2018-6AM-PHOTOS COURTESY OF WLAF’S PAT PEBLEY)

One Reply to “Addington out. Cougars not out of options.”