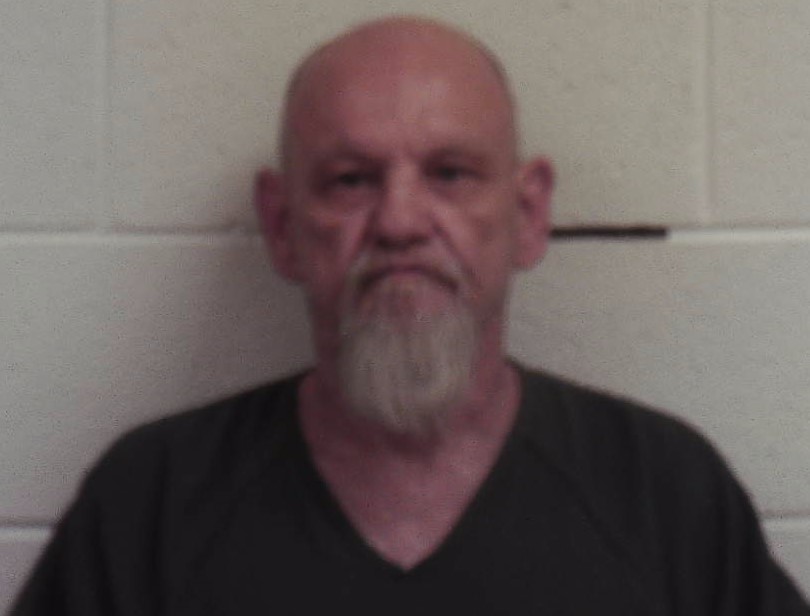 Allen Darryl Davis 57, homeless of La Follette was arrested for his eighth charge of driving under the influence (DUI).
JACKSBORO, TN (WLAF) – Allen Darryl Davis was arrested on multiple charges, including felony evading arrest and his eighth driving under the influence charge.
On July 2, Jacksboro Police Sgt. Franklin Ayers was dispatched to Highway 25 W to be on the lookout for a white Ford Explorer being driven by a possibly intoxicated person.  Once Ayers located the vehicle, he witnessed Davis, 57, allegedly cross the fog line and the center line multiple times. Police initiated sirens and lights, but Davis refused to stop, the report said.
According to the Jacksboro Police report, Davis turned right off of Main Street to Asbury Road and refused to stop and then turned off Asbury onto Hatmaker Ridge without stopping at the stop sign. He continued on for two miles before turning onto Queener Road without stopping. The pursuit allegedly continued for three miles down Queener Road, before Davis turned onto Island Ford Road, traveling a half mile before turning onto Mount Paran Road.
Davis was allegedly traveling at speeds of 80 miles per hour in a 35 mph zone, police said. Davis traveled about four more miles, illegally passing vehicles on the double yellow line, on the other side of the road.  Davis then turned off Mount Paran Road onto Towe String Road, without stopping at the intersection. At that point, the Campbell County Sheriff’s department continued the pursuit out Pinecrest Road for approximately five miles.
The pursuit ended when Davis turned onto Landmark Road and stopped in a driveway.  He was taken into custody by  Campbell County Sheriff’s deputies. Upon speaking with Davis, officers noted he had a strong smell of an alcoholic beverage coming from him, as well as having blood shot eyes and being unsteady on his feet.  Officers then checked his license and found it had been revoked for seven prior DUI charges.  It was also found that the registration did not come back to match the vehicle being driven, nor did Davis have insurance.
Upon searching the vehicle, officers found “three open containers that were cold to the touch.” Davis was transported to the county jail and given a sobriety test, which he failed, according to the report.
Davis was charged with felony evading arrest, eighth offense DUI, violation of the implied consent law, violation of the registration law, violation of the financial responsibility law, violation of the open container law, failure of driver to exercise due care, violation of a traffic control device, speeding over 65 in a 35 mph zone and reckless driving.
A court date for Davis is set for later today.  In the meantime, he remains housed this morning in the Campbell County Jail on an $80,000 secure bond.  (WLAF NEWS PUBLISHED – 07/07/2020-6AM)