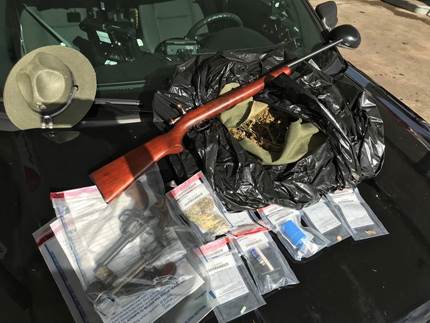 FALL BRANCH, TN (WLAF) – On Oct. 9, Tennessee Highway Patrol (THP) Interdiction Plus (IP) Trooper Ryan Fletcher stopped to conduct a motorist assist on a vehicle that had pulled over just off I-26 in Unicoi County.    Fletcher, a native of Campbell County, noticed the driver was passed out behind the wheel. Trooper William Connors and Sgt. Doug Brewer responded to the scene to assist.

Troopers were able to wake the driver up and check his condition. The driver was identified as Ronald M. Weir, 48-years-old of Afton, Tennessee. As the troopers conducted their investigation, it was determined that Weir was impaired.  Fletcher placed Weir under arrest for driving under the influence, 4th offense.

Connors deployed his K-9 “Laky” around the vehicle and received a positive alert that drugs could be in the vehicle. The troopers conducted a search of the vehicle and located five pounds of marijuana in a trash bag, three loaded pistols, one rifle, and a variety of pills.

Weir was taken into custody without incident and charged with felony possession of marijuana, possession of firearms during the commission of a dangerous felony, simple possession of schedule drugs 3, 4, and 5, felony DUI 4th, possession of a handgun while intoxicated, implied consent, and driving on a revoked driver license for a previous DUI.