Officials from the Tennessee Department of Transportation (TDOT) held a question and answer session Tuesday evening at the Campbell County Courthouse at Jacksboro.     The almost 90-minute meeting was attended by more than 40 residents who live on or near Stiner Highway (SR 63), quite a few elected officials and even some out-of-county elected officials.  The evening’s topic was the proposed improvements for State Route 63 also named  Gen. Carl W. Stiner Highway.

Pictured above are Steve Borden (L) and Dexter Justice (R), with TDOT’s Knoxville office, who hosted the get-to-gether.  Borden is the Director/Assistant Chief Engineer of Region 1, overseeing the 24 county East Tennessee region, while Justice is the project development director for Region 1.  Each listened, explained and answered questions to an audience that, at times, veered from the main topic.

The key questions were when will the project begin, how long will it take and will there be added traffic lights.  Some property owners that will be affected by the widening of the two-lane road to five lanes were on hand and appeared to be in agreement with what they heard last evening.

Beginning in the fall, likely October, Justice said  construction would start on each end of State Route 63 (between La Follette and Harrogate) and be the first two of four proposed projects. 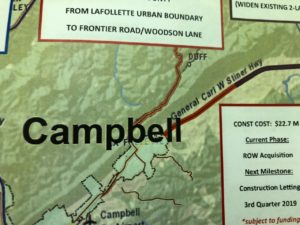 At east La Follette’s city limits  near Myers Lane to near Frontier Road/Woodson Lane (in Campbell County – shown above with red line) the first phase will take place while at about the same time work gets underway from the T at Harrogate at US 25E (State Route 25E) coming back down the valley to west of Old Town Creek in Claiborne County (shown below with red line). 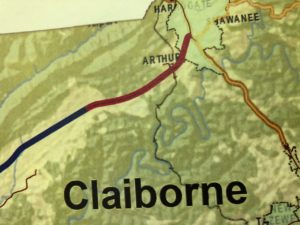 Borden said, “These type projects generally take about three years (32 to 36 months).”  He went on to say  traffic lights will be placed at Myers Lane by Food Lion and Old Middlesboro Highway/Wildwood Circle by the Ball Farm Event Center.  The traffic light at Big O’s, where Old Middlesboro Highway meets SR 63, will be replaced, and that intersection will be re-worked. 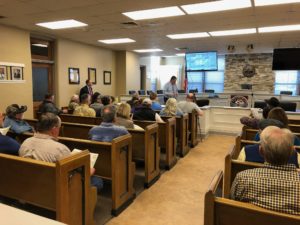 It was also noted Tuesday evening that a study is underway on the feasibility of placing a traffic light at Campbell County High School.  It was said that LMU is also moving its main entrance to State Route 63.