The La Follette Police Department responded on Friday to complaints of speeders on North Tennessee Avenue in a unique but effective way.  It erected two speed zone signs with one of the signs displaying a digital speed read out.  Captain Stephen Wallen and Sergeant  Charles Duff put the digital speed reader up where Aspen Street meets North Tennessee.  It’s powered by solar energy. 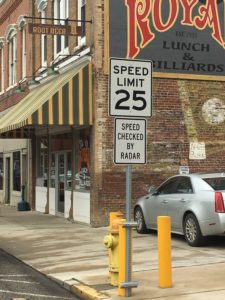 LPD Chief Bill Roehl said as he watched traffic pass by the new sign, “Watch how they slow down once they see that they are speeding.”  Roehl calls the new system more effective and less expensive than posting an officer to run radar.  The chief points out that this unit will be rotated around town to help speeding drivers realize just how fast they are going encouraging them to slow down.  (WLAF NEWS PUBLISHED – 01/22/2019-6AM-CHARLIE HUTSON PHOTOS)