The Campbell County Youth Football League’s JV Hopper Cougars made it to the championship game for the first time ever.  In fact, the JVs were the only team out of the three divisions of JV Hoppers, Hoppers and Cutters to make the playoffs this year.  Which is rare, because it is commonplace for all three to get to the post season.   They won over Norris, a team they had beaten rather handily during the regular season, 28 – 22.  Though the Norris JV Hoppers came to play Saturday at the Anderson County High football field, they still could not stop the Cougars and Isaac ‘Tater’ Ray who ran for four touchdowns. 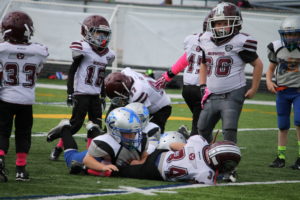 The Cougars have never qualified for the championship game before, and David Graham with The Sports Report was there for the history making win.  The CCYFL’s JV Hoppers  advance to play against the only team to beat them during the regular season, the Chargers of South Clinton.  The Cougars look to resolve that issue this Saturday at Fairview Middle School when they face the Chargers for the title.  FMS is on the Howard Baker Highway in Huntsville.

The Cougars Isaac ‘Tater’ Ray runs it in from 85 yards out to give the JV Hoppers a lead, and they never looked back as the defense slammed the door shut.

Graham caught up with Mike Ray, head coach of the Cougar JV Hoppers.  The interview with the coach and some of the young Cougars airs on the next David Graham Sports Report Thursday at 7:30 pm over WLAF-TV 12.  (WLAF NEWS PUBLISHED – 10/15/2018-6AM-PHOTOS COURTESY OF DAVID GRAHAM-UPDATED 10/15/2018-2PM)