And those players are just the beginning. 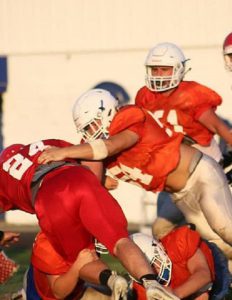 The Cougars return a lot of experience on defense

From here, it looks like the 2018 Cougar Football Team is a team that will grow on you from game-to-game. “I’m encouraged by the way this team is coming together. We’re getting guys in the right spots and finding where our strengths are,” said Campbell Head Coach Justin Price.

Wednesday was an afternoon spent on the Cougars soggy practice field. It was also an afternoon of”getting our basics back and fixin’ ’em up” according to Price. Yesterday’s practice came after Tuesday night’s home scrimmage with Halls. The scrimmage was effort the 8th-year head coach described as “good in several areas.”

It was CCHS’s second scrimmage in five days; a tough task.

“There were not many mental errors,” Price said. “Our kids were mentally sharp.” And with the amount of inexperience this ’18 squad has at key positions, Price notes, “That’s good.”

Opposing kick return teams will be at the mercy of Riley Wallace’s foot, the Cougars’ placement specialist and punter. This season may be a first for CCHS Football in that it has a kicker capable of spotting kick-offs in the end zone with regularity.  Something that was done in the Halls scrimmage. Price grins at the thought of making opponents have to go 80-yards for points on Friday nights.

This is a team that is balanced in that it can throw and run. Price points out that doesn’t mean we’ll go half-and-half, but that we’ll be able to take advantage of what the defense gives us.

A scrambling quarterback in Landon Addington brings a new dimension to the Cougar offense. “And his throwing continues to improve,” says Price. The head coach calls Addington’s greatest asset his ability to self-correct.

“He’s anxious to improve,” the coach said. “And has. This is his time, and he’s ready.”

The Cougar defense is most experienced up front and at inside linebacker. Price is confident in his defense. The CCHS secondary is all new at one of the toughest spots in football. 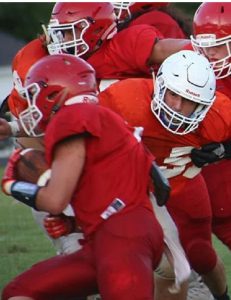 Campbell opens the regular season against Cherokee at Rogersville on Friday, August 17

Several Cougars on this ’18 team play fast, because of their high level of confidence, according to Price. “It’s a collective effort from a lot of guys.”

Campbell plays Central at Neyland Stadium Friday night in the third quarter of the evening. The Jamboree starts at 6 pm.

On Saturday at Powell, the CCHS Freshmen jamboree quarter is at11:30 am.

The season opens at Rogersville on Friday, Aug. 17, at 7:30 pm, against Cherokee.

All the live radio and television coverage is over the WLAF – B & M Tires Sports Network.