When William Scott Lobertini drove away from a La Follette Police stop last week and eventually eluded LPD and Campbell Deputies, we knew it would just be a matter of time before he was caught.  This morning was that time.  La Follette Police Captain Stephen Wallen, K-9 handler Matt Forsythe, and K-9 Officer Bam Bam acted on a tip through the Anderson County Sheriff’s Office Narcotics and ACE units.  Lobertini was taken into custody without incident at Tommy’s Motorsports at Exit 122 of I-75. 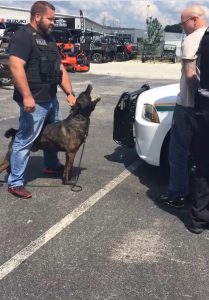 William Scott Lobertini (above right and below) 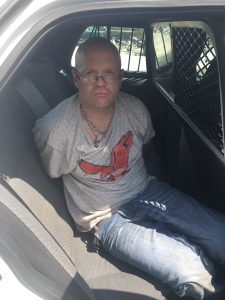 Lobertini was wanted on warrants when he was pulled over last Thursday morning by an LPD Officer for a traffic violation.  He soon drove off triggering an hour-plus pursuit by LPD and CCSD Officers, ditched his car, and took off on foot.  His passenger, Joann Marie Davis, also wanted, was soon caught on South Avenue while Lobertini remained on the run until late this morning.