On a Wednesday morning visit to Smith Hardware, I bumped into Joe Snodderly.  I told the former La Follette Owl that when I see him it always  reminds me of his late teammate Carl Rutherford.  That’s all it took.  Our visit quickly went back to the 1962-63 LHS Basketball season.  That was quite a year.  The Ron Murray coached Owls played deep into the region tournament defeating Knox South and its star Jay Cole and future Owl Coach Bill Young. 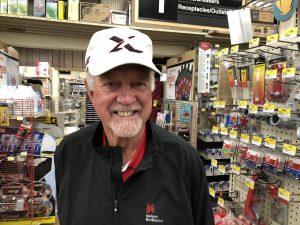 Joe Snodderly (above) and teammate Carl Rutherford, both juniors, each held the single-game scoring  record for La Follette High School in the 1962-63 season.

Along the way that year, Joe set the school’s single-game scoring mark at 40-points.  Later in the season, Carl was on the verge of breaking Joe’s record.  It was late in the game.  Carl had 39-points.  And time was running out.  Snodderly had a lay-up.  But he passed it up and tossed the ball to a trailing Rutherford.  Carl scored, broke Joe’s record, and finished with 41-points.

Rutherford’s record stood for seven more seasons.  Gary Gray snapped Carl’s mark with 42-points near the end of the 1970-71 season.  With the closing of old La Follette High, the all-time single-game scoring mark will always belong to Number 42, Gary Gray.

Snodderly recalls that he and Rutherford were part of a starting five also comprised of Ronnie Carroll, Bobby Heatherly, and Clell Huff.  (WLAF NEWS PUBLISHED – 06/28/2018-6AM)