The WLAF – Hammrtech Hot Line
... WLAF TRAFFIC: Another blast at the rock quarry near the high school is scheduled for Thursday at noon. Traffic will be stopped on the four lane, Hunters Branch Road and old Jacksboro Pike. ... 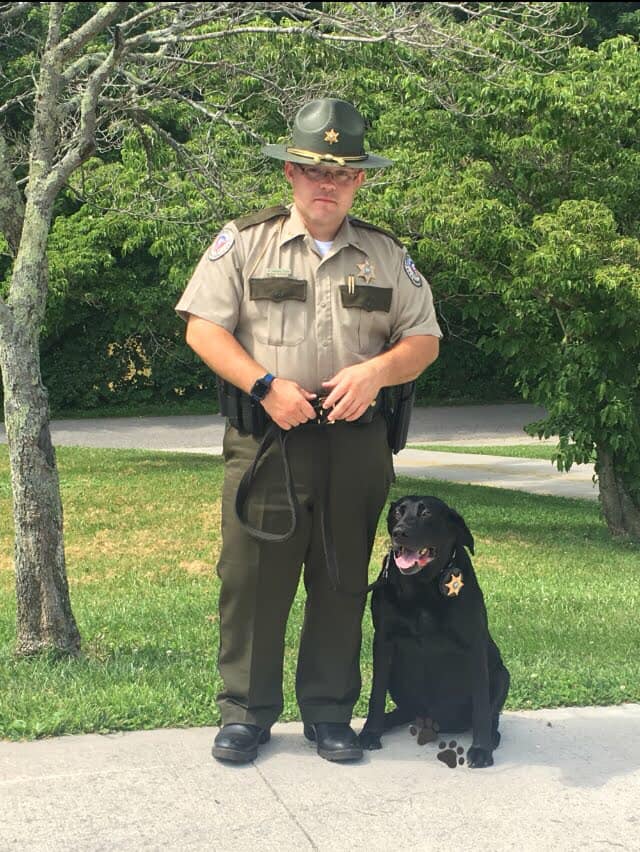 TOP PHOTO:  Jacksboro Chief of Police Jeremy Goins with K-9 Officer Cowboy in 2015 when Goins was with the Campbell County Sheriff’s Department. 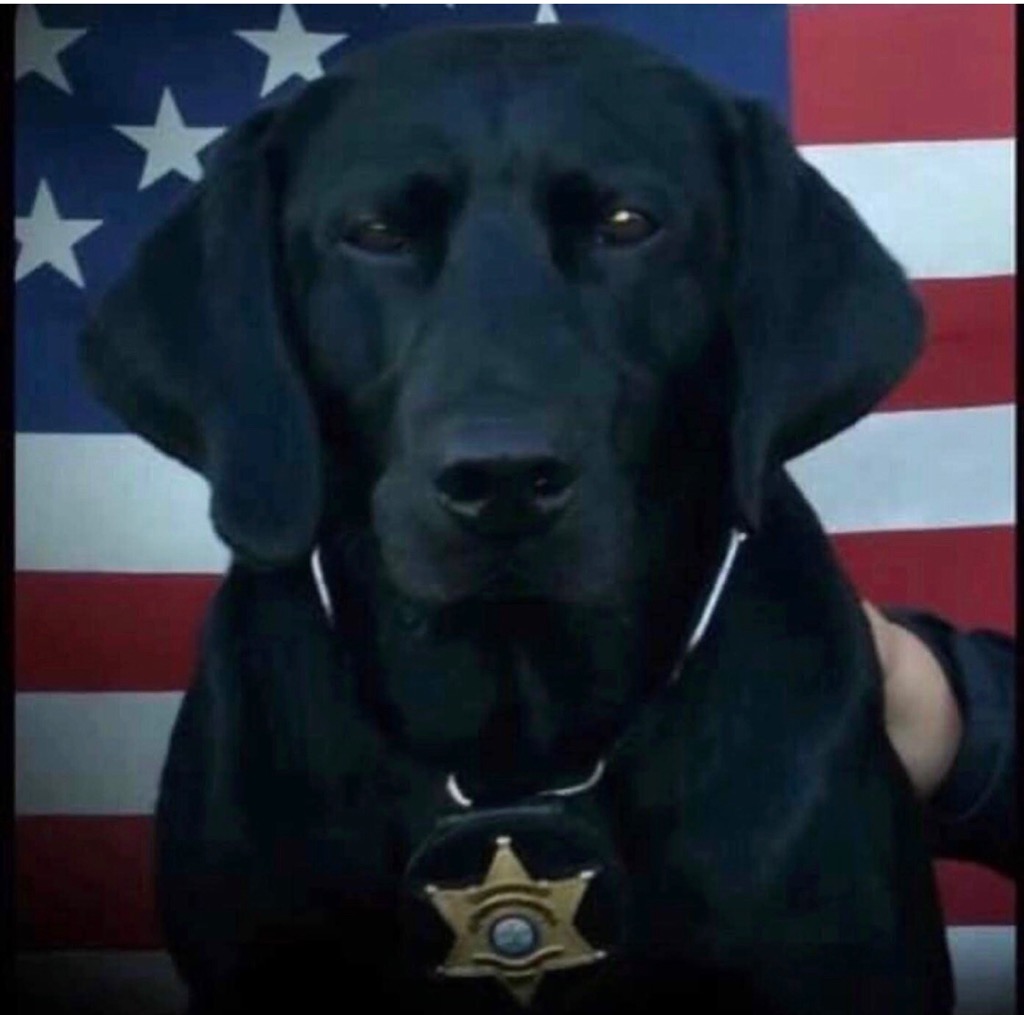 This is the photo of K-9 Cowboy that will forever be displayed at the Campbell County Sheriff’s Office at Jacksboro.

JACKSBORO, TN (WLAF) – The sad news of K-9 Cowboy’s passing hit hard Tuesday night.  Not only did his handler Jacksboro Chief of Police Jeremy Goins lose his beloved black Labrador Retriever, Campbell County and the United States lost a decorated officer as well.  Although it’s Chief Goins who is feeling the emotional brunt of the loss, others can relate, in particular Campbell County Sheriff Robbie Goins who was also very close to Cowboy.

Chief Goins said, “I’m so overwhelmed with emotions in the loss of Cowboy. Cowboy was not just a dog; he was a U.S. Marine, a CC Sheriff’s Deputy and my best friend.  That relationship began in 2013 when Goins was with the Campbell County Sheriff’s Department. 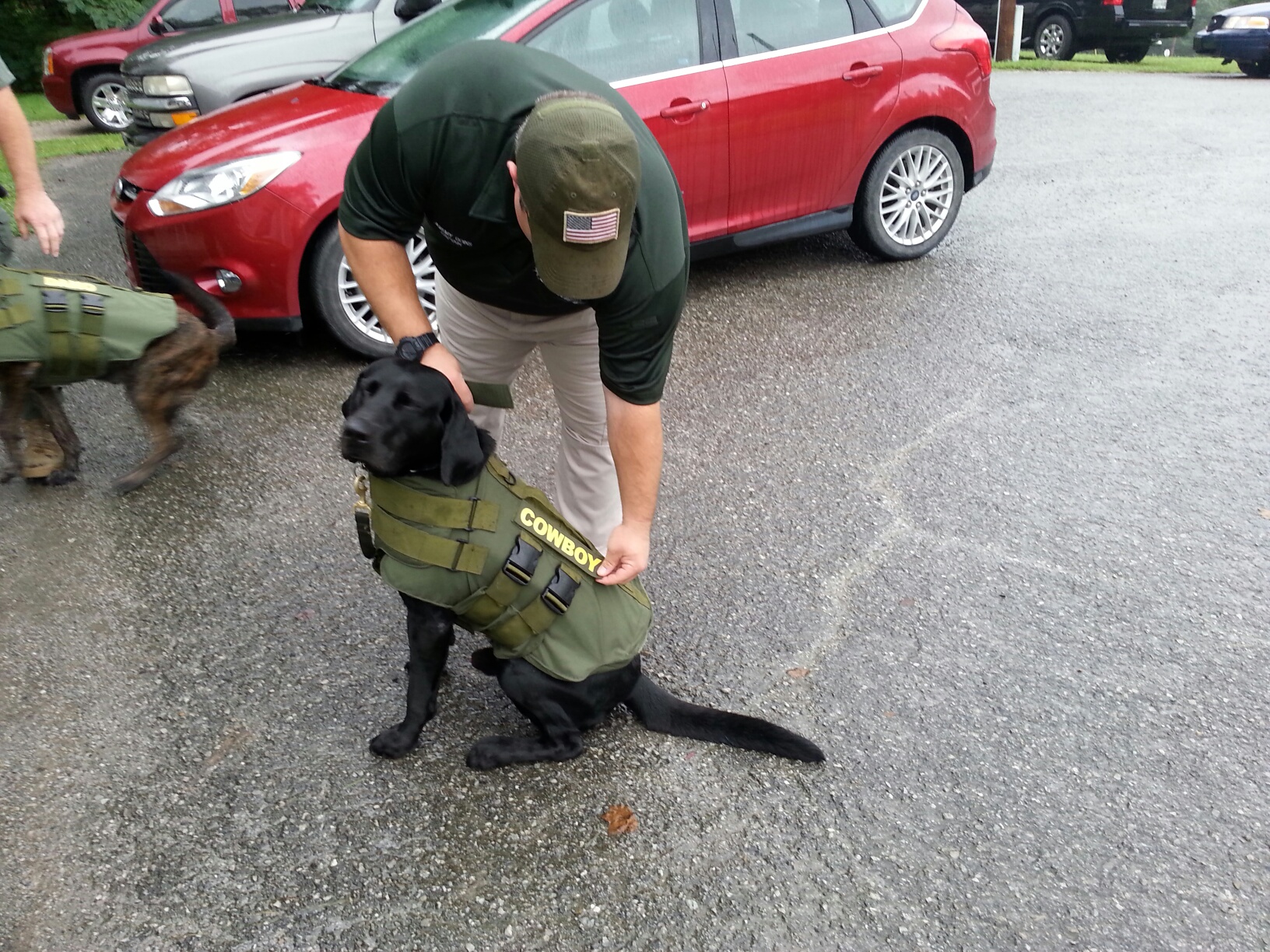 Chief Jeremy Goins and Cowboy at Cove Lake State Park for an event in 2015.

For Jeremy Goins, Cowboy made his dream of becoming a K-9 handler come true.  Goins points out, “I will always treasure the opportunity I was given by the sheriff’s office to have Cowboy as my partner.”

Cowboy served in the United States Marine Corp; 1st Battalion 5th Marines based out of the Marine Corps Base Camp Pendleton, California, aka Geronimo.  The handsome black Lab did two tours of duty in Afghanistan in 2009-2010 and 2010-2011.

“He came to us in 2013 here at the Sheriff’s Department, and from Day One, he was the most unique dog I’ve ever been around.  He had such a special personality that just drew people to him,” said Sheriff Robbie Goins.

Chief Goins said, “His kind, gentle and loving demeanor is what made Cowboy. It didn’t stop there for him. He was a great explosive detection and tracking K-9. His abilities were amazing.”

Cowboy’s partner, Chief Jeremy Goins, recalls a lot of good times together along with working lots of cases together.  One memorable highlight is when Goins and Cowboy were a part of President’s Trump detail on his last visit to Knoxville. 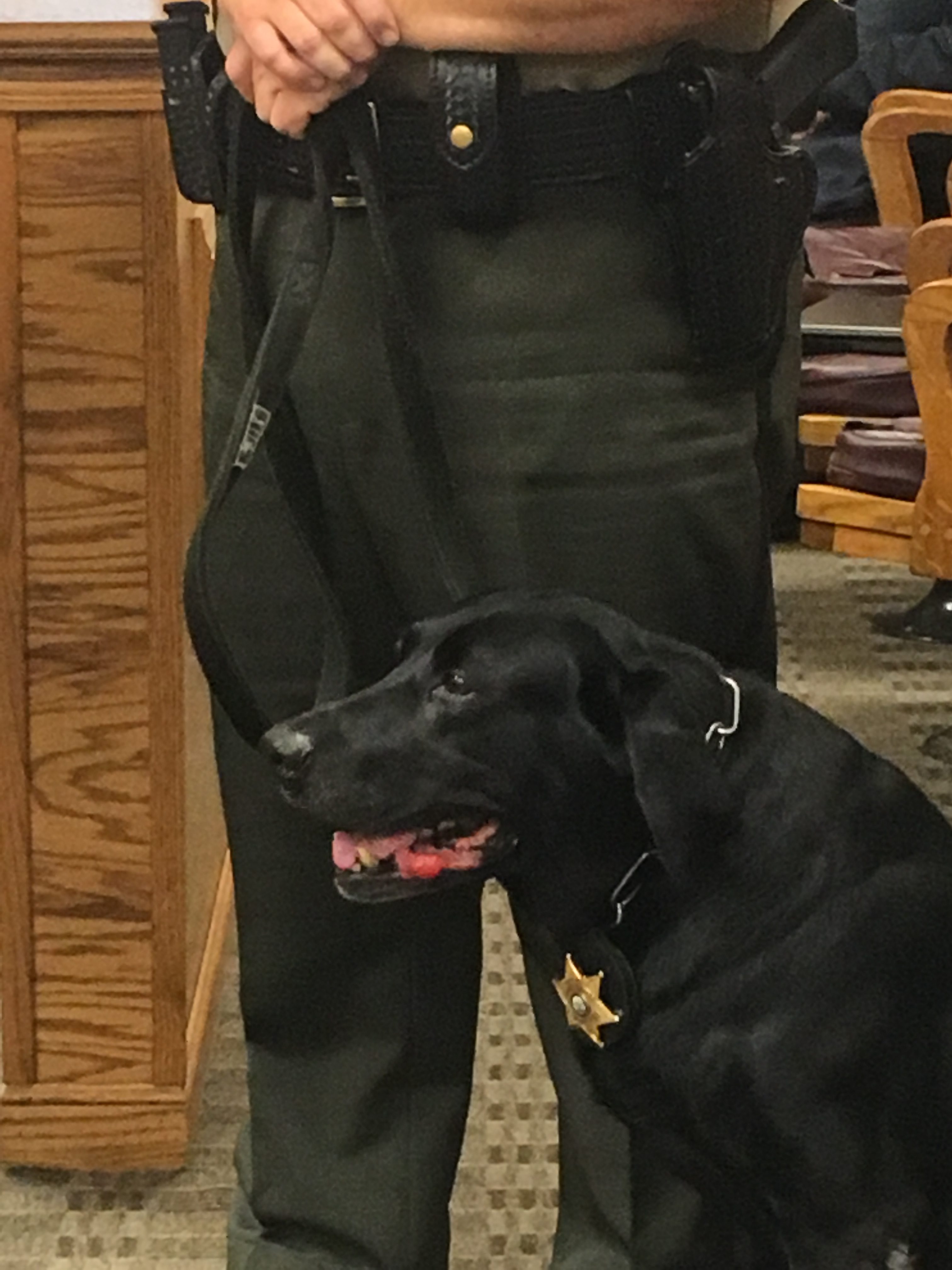 Cowboy was honored at a retirement ceremony in June 2018.

Related stories on Cowboy are found HERE and HERE.

Cowboy was certified in explosive detection and tracking and retired from the Marines with the rank of sergeant.  “His job during the war was very dangerous, and the service he provided for our country was unreal,” added the sheriff.  He goes on to say that Cowboy did an unbelievable job for us and was truly gifted.  Sheriff Goins said missing him here at the department and around the county goes without saying. 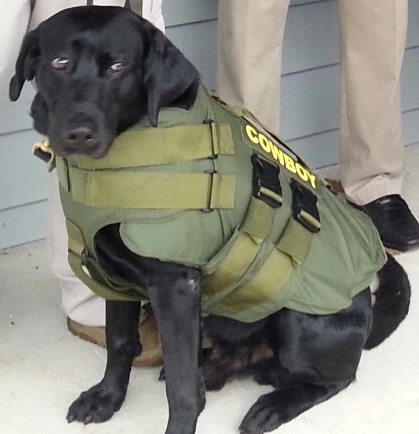 “I was able to experience so much because of him. I met wonderful people while speaking at schools and explaining Cowboy’s service in the military and service with the sheriff’s office to working events alongside some of the best men, women and K-9s I’ve ever had the privilege to meet,” said Chief Goins.

Sheriff Robbie Goins delighted in Cowboy’s personality.  Cowboy would sneak away from Chief Goins and stay in the sheriff’s office, because the sheriff kept a bag of treats in his desk.  “He was my buddy, and his passing is a great loss for me,” said Sheriff Goins. 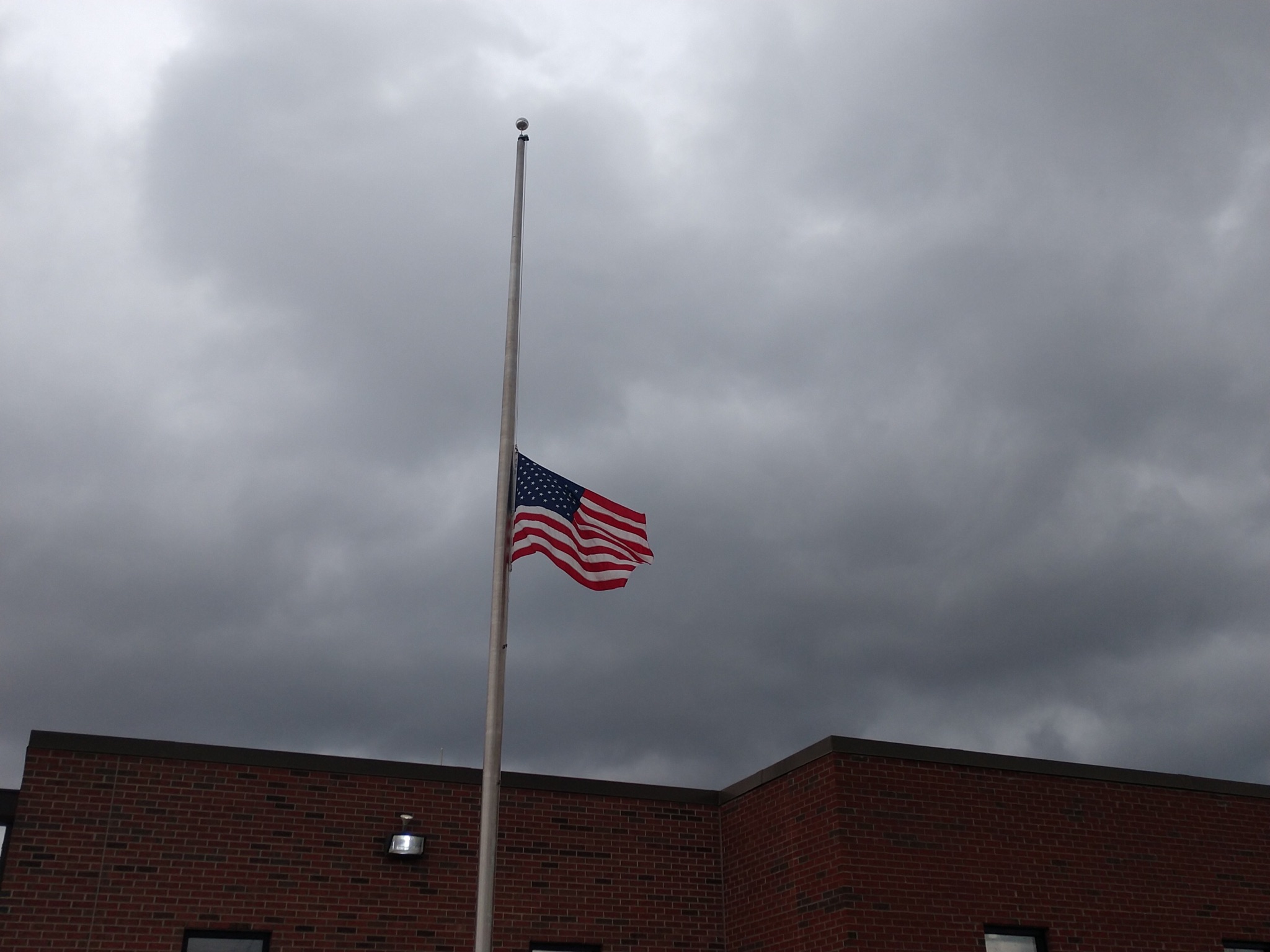 The flag at the Campbell County Sheriff’s Department flies at half-staff today.

“Cowboy, who was 11-years old, was laid to rest tonight (Tue.) at my home with his loving family around him. Thank you for all the wonderful and loving comments about Cowboy,” said Chief Jeremy Goins. 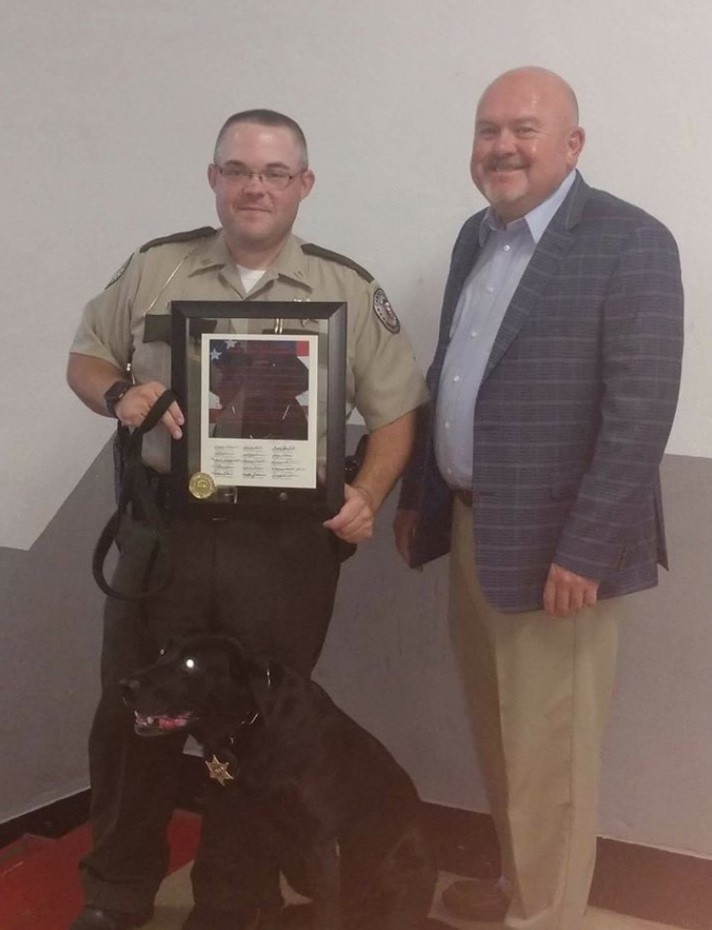 “It was take your best friend to work day every day for me.  I have a heavy heart but great appreciation,” noted the chief.  (WLAF NEWS PUBLISHED – 02/26/2020-NOON)