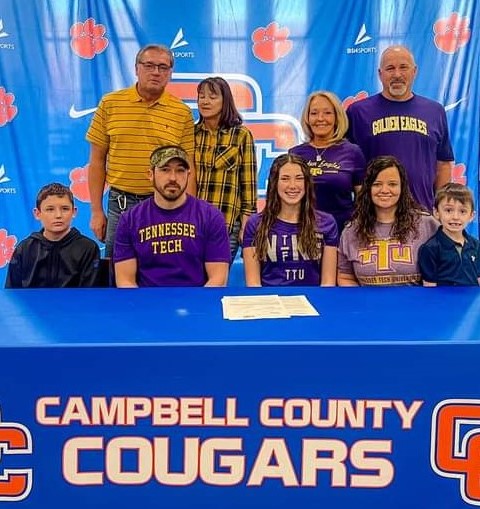 TOP PHOTO: Campbell Lady Cougar Madison Johnson is on her way to Cookeville come next school year when she’ll compete for the Tennessee Tech Golden Eagles.

Johnson was surrounded by family, coaches and teammates on Tuesday as she signed her letter of intent to play for the Golden Eagles.

“I knew from the beginning I didn’t want to go to a big school and compared to my other offers Tech felt right. It wasn’t too big or too small; I could walk to all my classes if I wanted to and all around I felt very welcomed when I visited the campus,” Johnson said.

She hasn’t quite decided on her field of study, but said she is leaning towards “business and Forensic Psychology.”

As far as her athletic achievements, Johnson said she “couldn’t have done any of this without Greg Vincent” who was her middle school coach at LaFollette.

“If it weren’t for him I never would have done high jump. My 6th grade year I was very tall, lanky, and uncoordinated. I had tried hurdles, long jump, everything you could think of and I just wasn’t that good at it, but one day after practice he was talking to me and he pointed over to the high jump pit and said “that’s going to be your cup of tea” and since then I’ve been doing high jump,” Johnson said.

After she became a freshman, she said she wasn’t even going to do track anymore and was going to focus on volleyball instead, but Coach Chris Shouse convinced her to come out for track.

“I did, and he’s been an amazing coach; he’s helped me with so much in fixing my form and, he never gave up on me even when I’d get so frustrated with myself during practice or meets,” Johnson said. Johnson also gave special thanks to Volleyball coaches Travis and Renee Wormsley who she said have always been good to her and helped her whenever she needed them.

Another person she said she wants to thank is her mom Shaniell Johnson.

“She’s had to haul me and my friends around to meets and practices everyday, and I couldn’t have done it without her. Lastly I want to thank all my teammates volleyball and track ones because they have always been there for me and helped me when ever I needed them as well as any of my volleyball coaches throughout the years,” Johnson said.

Campbell County High School Athletic Director Matt Price said he and the department were “extremely excited for Madison and her family.”

“Tennessee Tech is getting a great student-athlete and person. She will represent our community and school in a great way.  Her talent and hard work have provided her an opportunity to sign at the Division I level,” Price said. (WLAF NEWS PUBLISHED – 12/16/2022-6AM)