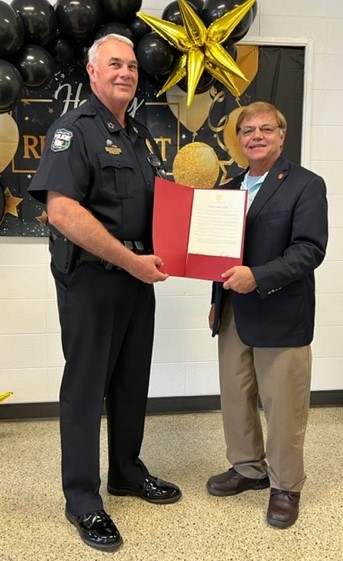 TOP PHOTO: State Representative Dennis Powers presented retiring La Follette Police Chief Bill Roehl with a proclamation for the Tennessee House of Representatives signed by House Speaker Cameron Sexton, Senator Yager and Powers. “Chief Roehl’s retirement is well-deserved, but will leave some big shoes to fill. We wish him and his family the best and thank him for his many years of service,” said Powers.

LAFOLLETTE, TN (WLAF) – Law enforcement veteran Bill Roehl has earned a mulligan. Not being able to stay retired after his first attempt at retirement, Chief Roehl says this time, he’s headed to the golf course once his final day as La Follette’s Chief of Police comes next Thursday. WLAF’s Charlie Hutson has the full photo gallery HERE.

Roehl retired from a distinguished 31-year career with the Knoxville Police Department, and then he took over as chief in August 2015 in La Follette. He followed in his grandfather’s foot steps who was also La Follette’s chief of police decades earlier.

Thursday morning in the cafeteria of the former West La Follette School, a retirement celebration was held in Roehl’s honor. It was intended to be a surprise event and pretty much was. “Steve, newly appointed chief of police Steve Wallen, came and got me, and I had no idea,” said Roehl.

Roehl stepped into the crowded cafeteria to a large round of applause and addressed the audience saying “this is too much.” “I’ve been honored to work in my hometown as our chief of police, and I thank you for your support,” said Roehl. He went on to say that it’s been great to get reacquainted with old friends and make new friends as well. “I truly appreciate this,” said Roehl.

One of those among the well attended event was David Rausch. Rausch is the Director of the Tennessee Bureau of Investigation (TBI) and served as the chief of police for Knoxville prior to his appointment to lead the TBI.

“It’s my honor to be here. When I got the call about this celebration, I said I’ll absolutely be there and cleared my calendar to celebrate my friend,” said Rausch. “Bill was already up the ladder in a leadership role with the Knoxville Police Department when I hired on, and I worked for him in a number of roles,” Rausch added.

Rausch shared a story of when he and Roehl were assigned to travel the state for a year working with law enforcement, leaders and members of the community through a program sponsored by the University of Tennessee. “Bill was his smooth, calm self in these sessions, and I was closer to being a preacher than a teacher. This one time I asked a group in a small town what their problem was, and a couple of officers pointed at a council member and said “he is.” Bill stepped in and said that sometimes you don’t get along and that you need to talk. The individuals did talk and worked out their differences,” said Rausch.

County Commissioner Scott Kitts was on hand to say goodbye to Chief Roehl. “He was a great asset to the city and did lots to help the city. I’m glad to have had him here,” said Kitts.

Roehl was hired as chief during former mayor Mike Stanfield’s time in office. “There’s a connection here. My uncle, Hodge Stanfield, was the police commissioner when Bill’s grandfather Carson was the chief of police. Then all these years later, Bill was my chief while I was the mayor,” said Stanfield.

“He’s built a great team here and excels at bringing people together. Through the years, he’s continued to support me in my role at the TBI. There’s no better man, leader and friend than Bill Roehl,” said Rausch.

Rausch thanked the many in attendance for their support of Roehl. “I think the size of this crowd says that,” said Rausch. (WLAF NEWS PUBLISHED – 08/26/2022-6AM)