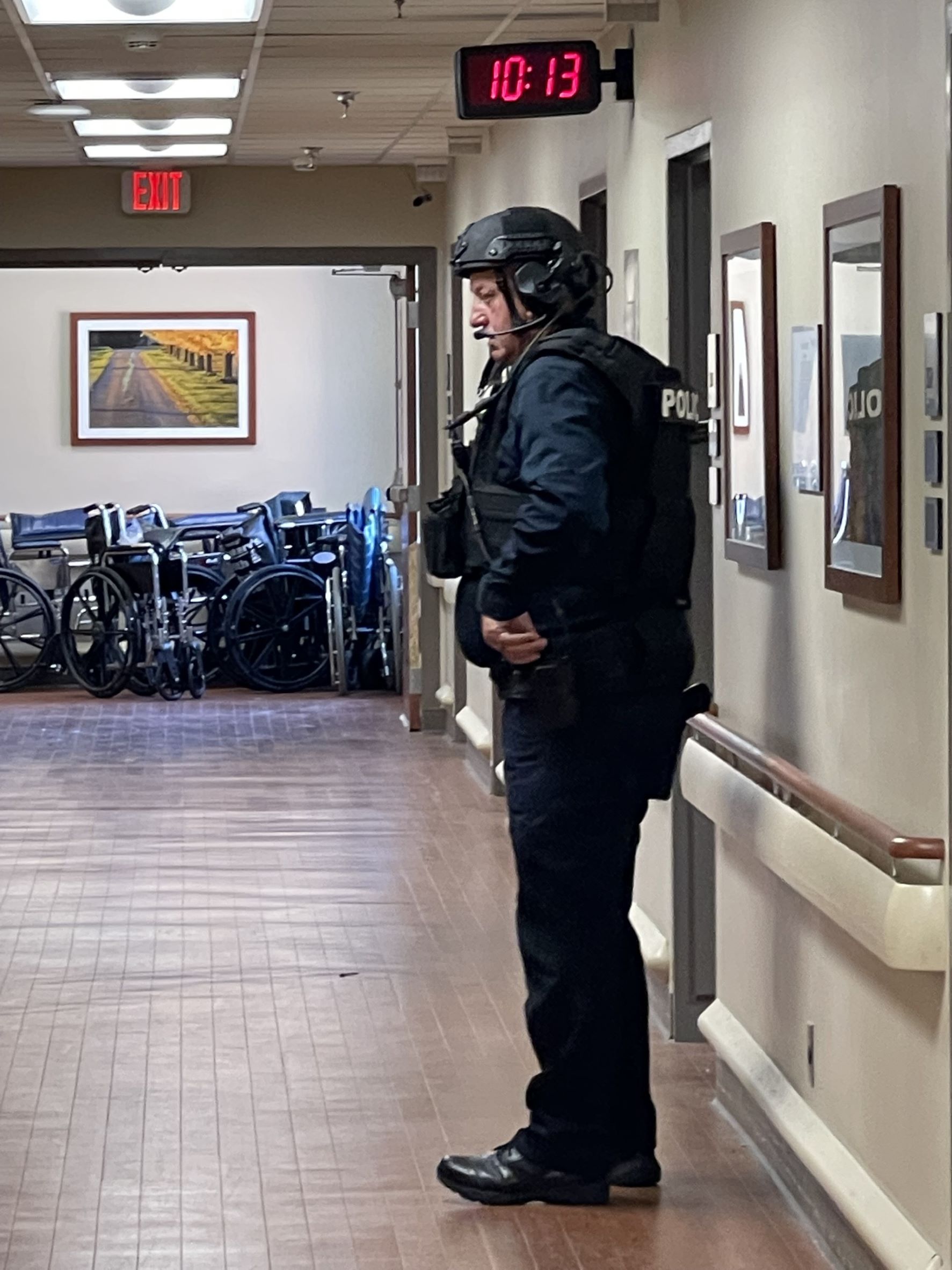 TOP PHOTO: LaFollette Police Special Response Team member Staff Sergeant Charles Duff along with other team members are dealing with a mock active shooter that barricaded himself inside the LaFollette Medical Center in this photo.

LAFOLLETTE, TN (WLAF) – Multiple agencies participated in an emergency response exercise staged by Tennova Healthcare – LaFollette Medical Center Wednesday morning. The training involved a mock active shooter who for the training scenario had barricaded himself inside the hospital, according to LaFollette Police Chief Steve Wallen.

Emergency units knew the exercise was going to take place Wednesday morning,  but they didn’t know what time. At 10:06 the training call of an active shooter at the hospital came across the dispatch. Road officers were first on the scene, followed by first responder units, the LaFollette Fire Department and the Special Response Team (SRT). The SRT team quickly entered the building, clearing the hospital, locating the mock active shooter and firing on him after he displayed a weapon and fired at officers; all part of the planned training exercise. In all, the shooter was contained in around 15 minutes after the dispatch call.

As soon as the mock active shooter was “down” an officer stayed with him to render aid, while others cleared the way for EMS responders to arrive. Hospital staff was involved in the exercise with their own triage and medic responses internally.

The training was coordinated by Tennova Healthcare and involved the health system’s LaFollette Medical Center.

According to Chief Wallen, these kinds of “hands on, in person training exercises are great for the officers who get to learn the layout of the hospital and hone their emergency response skills.”

Each Tennova hospital has a detailed emergency response plan, developed by crisis management experts to help medical teams prepare for mass casualty and other emergency events.

Due to COVID, it had been about three years since the LaFollette Police Department had participated in a live emergency drill at the hospital such as was held on Wednesday.

“It’s always better to train in person than in the classroom and these training exercises give the officers the chance to practice the protocols they need to follow in these situations,” Wallen said.

He also said he wanted to thank the hospital for the training drill and exercise and “partnership.”

“We have a great working relationship and partnership with Tennova and their safety coordinator Missy Turner,” Wallen said.

According to Tennova Healthcare LaFollette Medical Center Chief Executive Officer Mark Cain, holding these kinds of drills can “save lives” and prepares hospital staff in the event of this type of emergency.”

“While we do not want to imagine the possibility of this type of event, emergency preparedness is a top priority for Tennova Healthcare. We learned and reinforced effective actions to protect ourselves and our patients in this type of scenario. Knowing what to do in these situations can save lives,” Cain said. (WLAF NEWS PUBLISHED – 08/25/2022-6AM)