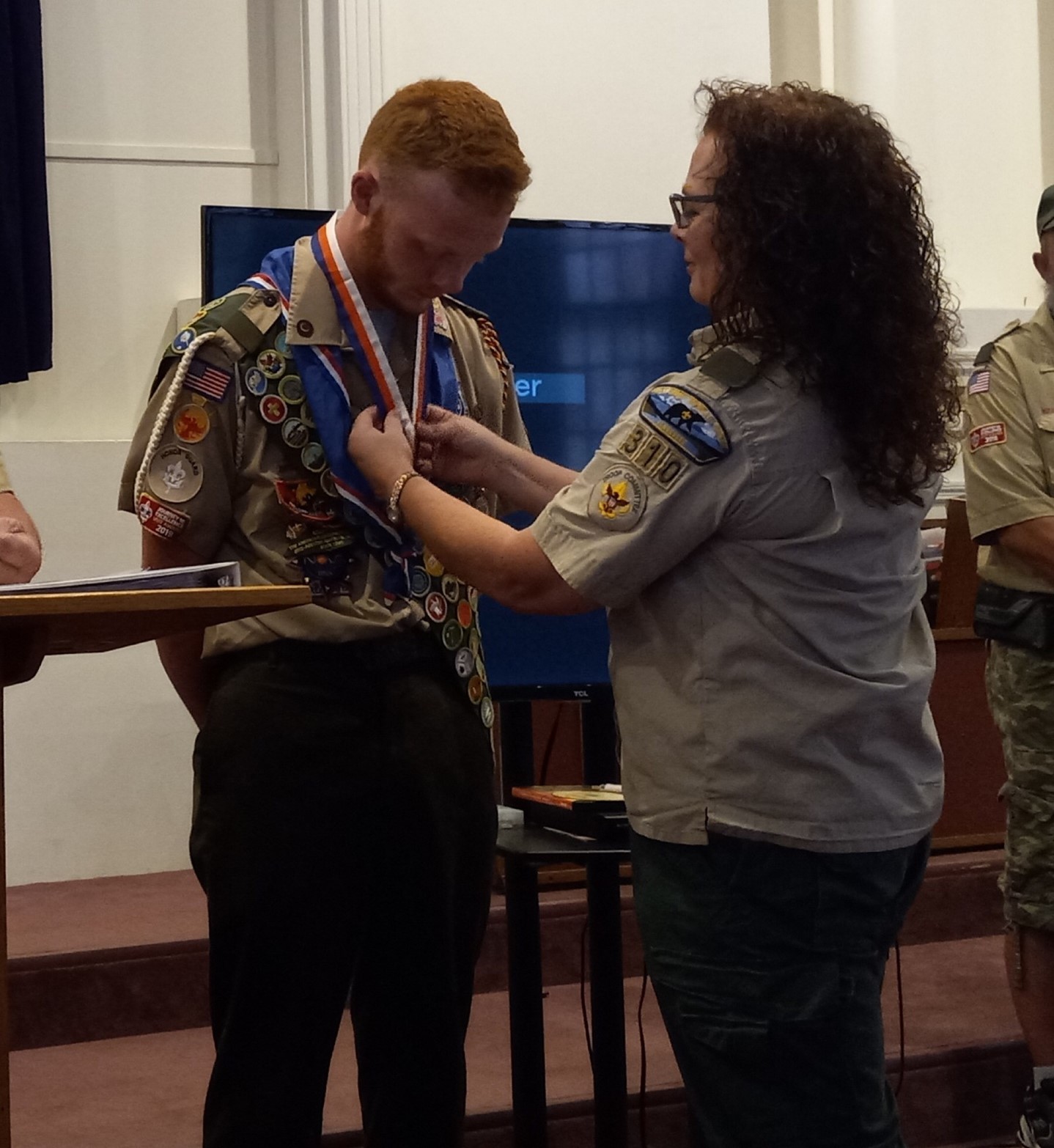 LAFOLLETTE, TN (WLAF) – Eagle Scout Stewart Thacker was awarded the Scouts BSA National Certificate of Merit for saving his mother’s life a year ago when she went into anaphylactic shock. He was presented with the National Lifesaving Award at Troop 310’s Court of Honor held at Cedar Hill Baptist Church in La Follette Monday evening.

On August 2, 2021, Eagle Scout Stewart Thacker, from Troop 310 in La Follette, performed lifesaving first-aid on his mother who was suffering from anaphylactic shock due to a severe allergic reaction to her newly-prescribed medications.

According to Stewart, it was “the skills he learned in the Scouts that allowed him to act quickly and deliberately” to save her life.

He was recognized by the BSA National Office for his actions in August 2022, and received the award Monday, August 15th at Troop 310’s Court of Honor ceremony.

“This was Stewart’s last court of honor as a youth participant in the scouting program, and a fitting award to serve as a capstone for his scouting experience,” said BSA Disrtict Executive Zane Joyeuse who was in attendance at the ceremony.

Most awards are bestowed at the Troop or Council level and it is of special merit the award was bestowed by the BSA National Office.

Representatives with the Great Smoky Moutain Council and the Mount Cammerer District were in attendance to congratulate Stewart on his achievements.

Anthony Ingram, Senior District Executive of Mt. Cammerer presented the award to Stewart.  He said being in Scouts built character, values and skill sets that make a difference in the world and this was a perfect example.

Stewart’s dad and Troop 310 Scout Leader said he was grateful for his son’s training and life saving efforts that day in August of 2021.

“He saved her life; that was a year ago. The training we go through can save lives,” Chris Thacker said.

According to Stewart, his mother had picked him up from track practice and she had been to the doctor shortly before and had been prescribed medications for a respiratory infection. On the drive home she began to itch “at an alarming rate.”

Stewart initiated life saving treatment for shock including communication, emergency phone calls, ice packs, benadryl and preparation for CPR. The ambulance arrived and administered an Epi-pen and transported her to the hospital.

According to Chrystal Thacker, she had taken the medication before, but had developed a severe life threatening reaction to it.

“I’m blessed Stewart was with me through it all,” Chrystal Thacker said.

Stewart credits his skills learned in Scouts as preparing him to handle the situation.

“Things would have been a lot worse if I had not received the training I have had from Troop 310 in Scouts BSA. Knowing what to do and how not only helped me attain the Eagle Scout Rank, but has allowed me to help other people, even in the worst circumstances,” Stewart Thacker said.

He said he would be “forever grateful” for his training from Scouts BSA.

After he turns 18 in two weeks, Eagle Scout Stewart Thacker will continue to help with Troop 310 as a Junior Assistant Scoutmaster. He also just started college to study Conservation Biology and Wildlife after finishing a summer internship with the Tennessee Wildlife Resource Agency. (WLAF NEWS PUBLISHED – 08/17/2022-6AM)