LAFOLLETTE, TN (WLAF) – WLAF shares this fun story from its archives from five years ago this month.

Monday, July 24, 2017, is a day I will always remember.  It was not only a normal day, but also a special day.  It was on that day where my life’s story aired during WATE 6 On Your Side News at 6 with anchors Kristin Farley and Lori Tucker.  That was one year ago today (now five years ago this month). With today being the one-year anniversary of my story airing on TV, let’s take you back to my special day.
The day started out as I arrived at the WLAF studios in La Follette for the first of two on-air shifts which was from 11am to 1pm. While I was in the studio waiting to go on the air, Ron McClellan came by to see me for an autograph.  I had my picture taken with him.

PHOTO ABOVE:  When Derrick Lee Anderson arrived to WLAF on July 14, 2017, he was totally caught off guard when Lori Tucker stepped off the front stoop at WLAF to tell him that she was there to do a story about him.

It was the start of an exciting day.   As the day progressed, I became more and more excited about what was to come.

An hour before my story aired on WATE, I was on the air for a second time which was 5pm to 6pm. Just before 6pm, I did my sign-off and played the promo for the story over WLAF radio.

Right after the weather forecast aired, Lori Tucker came on and did the intro to my story.   She said something in her intro that blessed my heart.  Here’s what she said:  “When you combine faith, determination and you get someone who believes in you, anything is possible.” 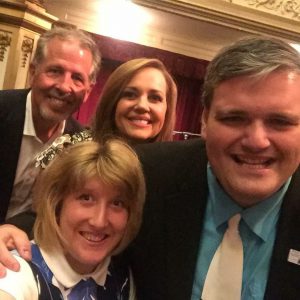 I was sitting in the DJ chair with the TV set on WATE with Jim Freeman and HoneyBee looking on.   As I saw my story unfold, I watched in awe as my mom Betty was being interviewed along with Jim Freeman, Big Josh and Brent McNeeley.  It was a story I will always remember.  In fact, it’s my favorite story of all time.

While many people were watching this story that night, someone special was watching it back at home – my girlfriend Candace.

The story that aired last year goes to show you that anything is possible, no matter the circumstances.

I wish to thank WATE chief photographer Brian Englestad for filming my story.  Brian is one of the best photographers in the business, and I am thankful for everything he does.

I would also like to thank my friend and WATE news anchor Lori Tucker for telling my story.  Lori is not only a blessing to everyone in East Tennessee, but she is also my favorite news anchor.

Most of all, I would like to thank all of you, including my girlfriend Candace, for watching this story.

To view Lori Tucker’s story on me, go to
https://www.wate.com/news/local-news/campbell-county-man-with-autism-lives-out-his-dream-on-radio/834571954