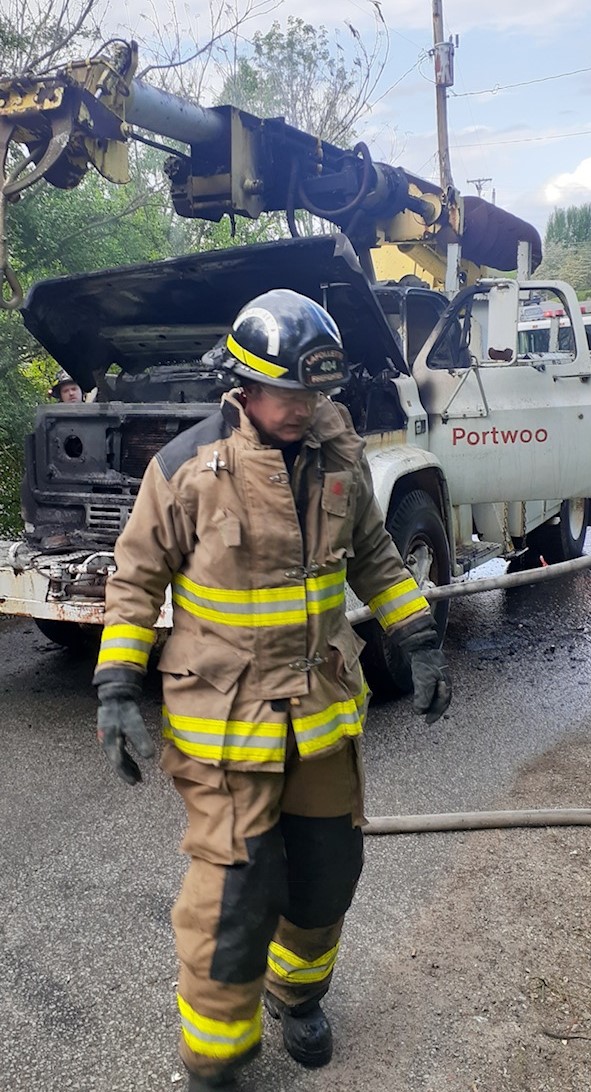 TOP PHOTO: Firefighters experience cancer at much higher rates than the general public. Firefighter Dewayne Seiber with the La Follette Fire Department is shown in this April 2022 photo soon after a truck fire was put out in east La Follette.

NASHVILLE, TN (SPECIAL TO WLAF) – New laws go into effect today, July 1, in Tennessee to support first responders and emergency services. Among these include legislation that expands benefits for firefighters, strengthens protections for police and service animals and secures crucial funding for ground ambulance services statewide.

Today, on July 1, legislation sponsored by Senator Paul Bailey (R-Sparta) expands benefits for firefighters injured in the line of duty. Under existing law, the Barry Brady Act allows firefighters to be eligible for workers compensation benefits for certain cancers. The act established a presumption that any conditions or impairments of full-time firefighters were caused by certain occupational cancers that occurred while on the job. Cancers covered are non-Hodgkin’s lymphoma, colon cancer, skin cancer, and multiple myeloma. The new law taking effect in July expands the list of cancers to which the presumption applies to include leukemia and testicular cancer.

“Firefighters experience cancer at much higher rates than the general public. The brave men and women who keep our communities safe deserve everything we can do to help them, especially with insurance coverage for conditions suffered on the job,” Bailey said. “This law builds upon the Barry Brady Act passed in 2019 to expand much-needed coverage and help more firefighters.”

Another law taking effect July 1 strengthens the penalty for anyone who harms a law enforcement or service animal in Tennessee. Known as Joker’s Law and sponsored by Senator Mike Bell (R-Riceville), the bill increases the penalty for anyone who knowingly and unlawfully kills a police dog, fire dog, search and rescue dog, service animal or police horse. Offenders would now be charged with a Class B felony.

Anyone between the ages of 14 and 17 who kills or causes serious injury to one of those animals could also be tried as an adult. Previously, killing a law enforcement service animal was a minimum Class E felony. The law is named in honor of Joker, a K-9 with the Bradley County Sheriff’s Office who was seriously injured after being shot during a pursuit last year.

The Ground Ambulance Assessment was created in 2018 to help fill the gap between the expenses incurred by ambulance services to perform a transport and what Medicaid reimburses for this transport. Without using any state dollars, ground ambulance services pay into a fund that draws down over $20 million in federal funds that is then paid back out to these services based on their Medicaid transports.