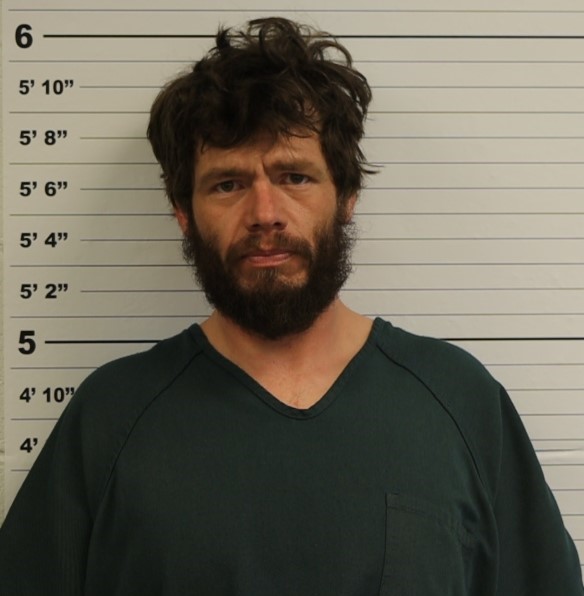 TOP PHOTO: Arrested last Friday was 31-year-old Joshua “Josh” Neil Blair of Clinton who police say took them on about a one-hour pursuit.

JACKSBORO, TN. (WLAF)-Joshua “Josh” Neil Blair has pleaded not guilty to a litany of charges following his fleeing from authorities last week. After being arraigned in court earlier this week, he remains in the Campbell County Jail on a $500,000 bond.

Last Tuesday, a Campbell County Deputy, traveling along the General Carl Stiner Highway/Highway 63, east of La Follette, saw a Chevrolet rollback truck that had been reported stolen. The deputy initiated a traffic stop, and the man behind the wheel, Josh Blair, refused to exit and drove off. A pursuit began traveling through several fields and yards of homes up the valley before Blair returned to the road. According to a report from the sheriff’s office, Blair then put the rollback in reverse and repeatedly rammed police cruisers. The pursuit continued into Claiborne County where Blair abandoned the truck in a field and fled on foot.

The pursuit became a manhunt as Sheriff Robbie Goins and his team hunted for Blair for nearly 72 hours. They relied on the assistance of multiple agencies including the Claiborne County Sheriff’s Office and the Tennessee Highway Patrol’s Helicopter Unit.

During the investigation, detectives with the Campbell County Sheriff’s Office received a tip about Blair’s identity. Blair was taken into custody Friday afternoon near Big O’s while he sat in a car. The woman who was with him at the time of the apprehension had just gone in to buy a drink at Big O’s when officers made their move.

Blair allegedly said the chase started because he had a “loaded needle in his seat, and he knew he was going to jail.” Blair said his use of Heroin leads to blackouts, and he had no recollection of the chase. He allegedly told police he only remembers waking up in the woods later that night. Blair confessed to Tuesday’s crimes.

“This arrest is due to the hard work of our deputies and the great relationships we have built over the years with other law enforcement agencies,” said Sheriff Robbie Goins. (WLAF NEWS PUBLISHED – 04/07/2022-6AM)