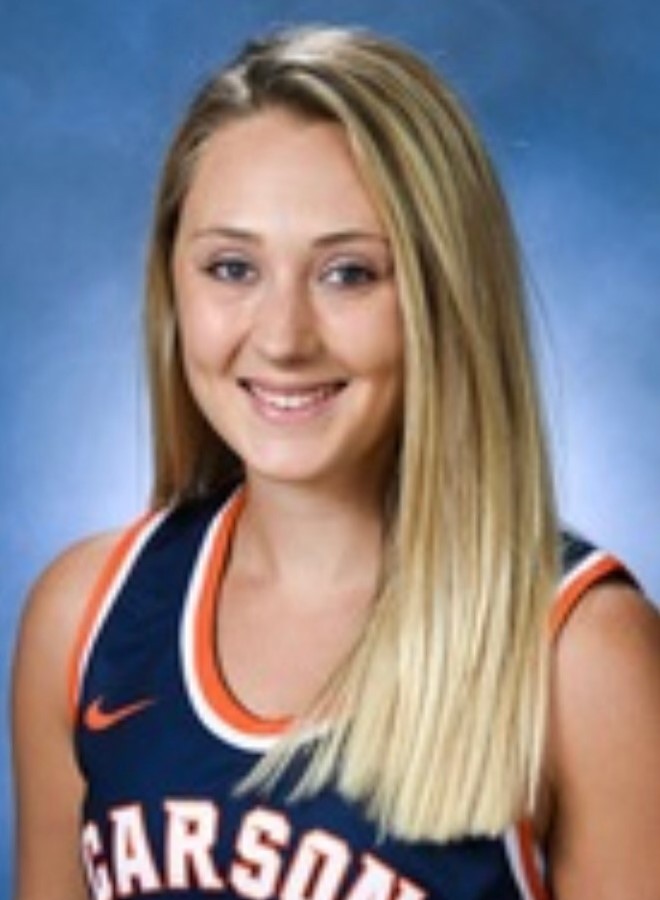 TOP PHOTO: Former Campbell Lady Cougar Skylar Boshears and her Carson-Newman Lady Eagles ventured to the south side of Charlotte on Wednesday night and came home with a win.

WINGATE, NC (SPECIAL TO WLAF) – Braelyn Wykle scored a career-high 33 points and 13th-ranked Carson-Newman buried a season-high 12 three-pointers to move into a tie for first place in the South Atlantic Conference with an 81-60 wire-to-wire victory against Wingate at Cuddy Arena Wednesday evening.

Wykle tallied her third-career effort of 30 points or more going 8-for-16 from the field and six of nine from long distance. The Greeneville, Tenn. native also reset career highs by going 11-for-12 from the charity stripe.

Carson-Newman (9-1, 9-1) pulled into a tie with UVA Wise for first place in the SAC standings making a dozen triples shooting 43 percent from long range. Its previous season high was eight. Five different players hit at least one from beyond the arc.

“We do have shooters and do have the ability to make threes,” Carson-Newman coach Mike Mincey said. “Tonight was really good going 12 of 28. When you combine the inside out, the ability to get in and get free throws. I thought tonight was probably our best at getting into all three levels especially getting to the rim. We were kind of struggling in the third quarter but Braelyn got in there and got fouled to get to the free-throw line. I’m just really happy with how they were able to do that. Shooting the three-ball here on the road making 12 hopefully will carry into our next game and the rest of the season.”

Not to be overshadowed, Harli Smith (Jamestown, Tenn.) produced a career effort going for 17 points chipping in five boards. The sophomore went 6-for-9 from the floor and buried three of five from long range after making 10 total in career prior to Wednesday.

“It was a big transition from last year to this year going from the five to the four,” Smith said. “I have been staying in the gym and working on that three and it’s really been helping me. My teammates were kicking it out to me and giving me wide open shots.”

No one else finished with more than seven but Addison Byrd stuffed the stat sheet with five points, six rebounds, four assists and two blocks. 17 of the team’s 38 rebounds came from reserves with Taylor Goforth (Friendsville, Tenn.) leading the group with a career-high six.

Wingate (5-8, 5-7) was second in the SAC in rebounding margin at an average of plus-seven this year but the Lady Eagles secured the edge at 38-36. The Bulldogs recorded 65 total offensive rebounds in the last three games and had at least 10 in every game this year but was limited to seven.

“I know [Wingate] is playing without [Haleigh] Hatfield who is their leading rebounder,” Mincey said. “They still have some key pieces there especially Troutman. They had 25 offensive rebounds at our place. We felt that we could do a lot better than that. We wanted to be able to outrebound them if at all possible, limit their second-chance points. I thought that was a real key. We have some size and that size really paid off tonight.”

Mincey’s club wasted no time finding its offensive rhythm scoring the game’s first 10 points before Wingate scratched the scoreboard with 6:34 to go in the first. A layup by Sydney Pearce (Johnson City, Tenn.) with less than five seconds to play in the first stretched the margin to 21-9.

Back-to-back buckets by Bryanna Troutman held the gap at a dozen midway through the second period before the Lady Eagles went full throttle. Carson-Newman scored seven straight and 12 of the next 16 as a triple from Wykle, who had 18 points in the first half, pushed the lead to 20 at 41-21 with 1:27 to go before halftime.

After a three-point play by the Bulldogs, Goforth connected on a three-pointer from the top of the key at the first-half buzzer to make it a 44-24 game at halftime. The Orange and Blue went 8-for-15 from the field in the second stanza.

Wingate trimmed the margin on multiple occasions in the third including a 7-2 sequence to make it a 51-36 game with 4:31 to play in the period. Wykle scored the team’s last five point of the frame to get it back to 19 points at 62-43 going into the fourth.

Smith buried a three and two possessions later converted on a driving layup to get the bulge to a game-high 24 with 2:06 to play in the game as C-N coasted to the finish line.

Troutman provided the star effort for the Bulldogs finishing the game with 21 points and 14 rebounds adding three steals. Jaia Wilson was the only player in double figures with 10 points chipping in four assists.

The Lady Eagles return to Holt Fieldhouse on Saturday playing host to Queens for a 2 p.m. contest against the Royals. Video and audio coverage of the action starts at 1:45 p.m. with “The AEC Countdown to Tip-Off” on the Eagle Sports Network by visiting cneagles.com/live and listening locally to 106.3 (WPFT-FM, Sevierville). (WLAF NEWS PUBLISHED – 02/04/2021-6AM)