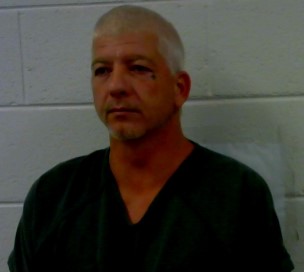 In jail since his arrest in Aug. 2019, Robbie Scott Gibson (above) was found guilty on Friday following a two-day trial.

Gibson’s was initially arrested  Aug. 13, 2019, when the call of a suspicious person on the property of a West Walden Street home came in to E-911.  The woman of the home told La Follette Police Officer Tony Mahar, now a member of the Caryville Police Force, that “she heard a loud bang outside her home and saw a truck matching Gibson’s truck,” a green 2002 Ford F-150.  Also according to the report, the woman told Mahar she had an order of protection against Gibson.

After leaving the home, Mahar conducted extra patrol around the area when he spotted the truck that matched the description the woman had described.  The officer pulled Gibson over.  Mahar noticed some small pieces of aluminum in the truck and let Gibson go.

Later that night,  Mahar received another call to the same West Walden Street address.  Based on the report, the woman’s son found some homemade explosives.  Mahar searched the property and found  several pieces of bottles that had exploded and three bottles that failed to detonate.  The bottles were defused and upon the inspection of the bombs, according to the report, Mahar discovered that there were projectiles in the bottles consisting of nails.

The discovery prompted Mahar to look for Gibson.  On South Avenue, Mahar pulled over Gibson.  This time, Mahar noticed a gun scope in Gibson’s pick-up believed to be used to watch the victim’s house.  Mahar arrested Gibson, and he’s been in jail since that  night.