TOP PHOTO:  Cougar Billy Lovely (second row, left) made first team all-district in 1983 and was recognized by the East Tennessee Chapter of the College Football Hall of Fame was a Scholar Athlete.

JACKSBORO, TN (WLAF) – In 1983, Cougar Billy Lovely etched his name in the Campbell record book with a dazzling kick-off return for a touchdown.  After the big play, he hustled to the sideline for a traditional bear hug from his coach, Willard Mitchum, only to see him bellied up to the fence with his back to the field.  Mitchum turned around holding a hot dog and a pop asking “what happened?”

Lovely and his wife Missy are back in town today for homecoming.  Billy graduated from CCHS in 1984 while Missy Evans Lovely is a member of the Class of ’86.  He’ll be Les Martin’s special halftime guest tonight on the WLAF – Doyle’s Tire Shop Sports Network. 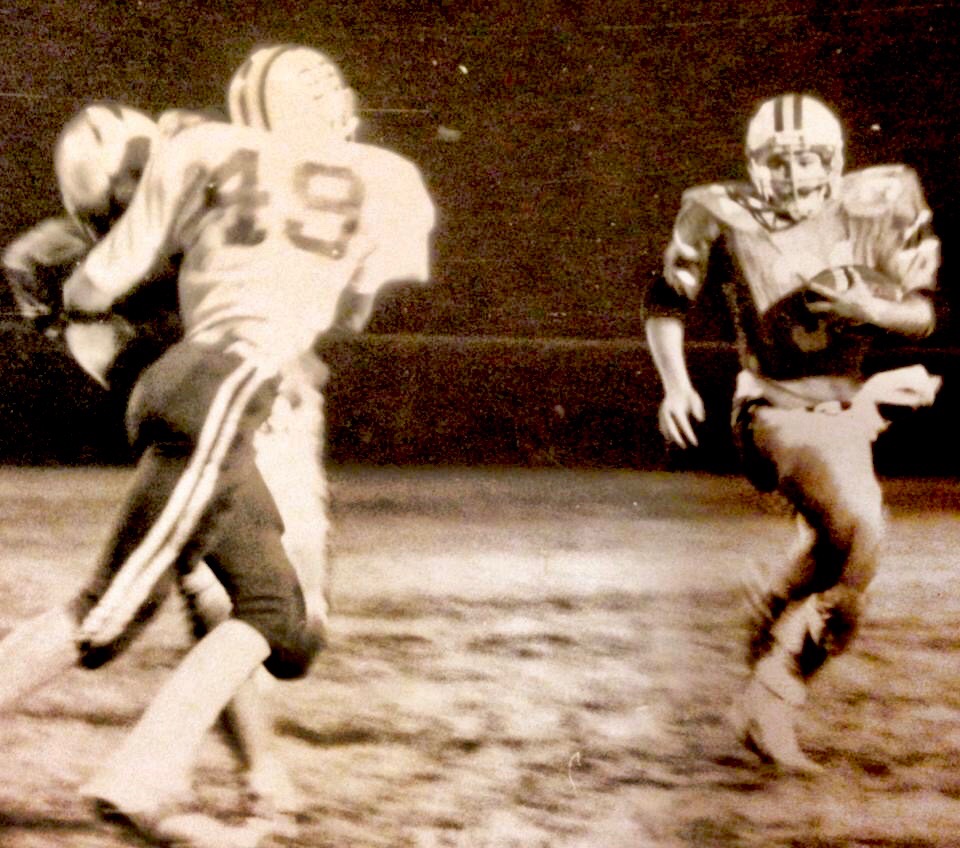 Now about that long run TD.  The Cougars were hosting Clinton, and the Dragons had not given up a point through its first three and a half games until Number 31 took the kick-off to the house to start the second-half.  And if that wasn’t enough icing, Lovely knew the Dragons’ defensive captain after attending Governor’s Cup together back in the summer.

Lovely set the mark of two kick-off returns for a touchdown in a career and was later tied.

Billy had a penchant for breaking off big runs and getting to the end zone.  In his very first home game as a Cougar, he ran back a William Blount kick-off for a score along with a 50-yard jaunt for another TD.  As a couple of us talked about Billy this week, it was said that he was the best natural running back to ever wear the Orange-n-Blue.

High school coaches were enamored with Lovely’s abilities as a 9th grader at Jacksboro Middle School.  In the La Follette game alone, he rushed for 363 yards and four touchdowns.  He was courted by Webb, Oak Ridge and Campbell County High Schools. 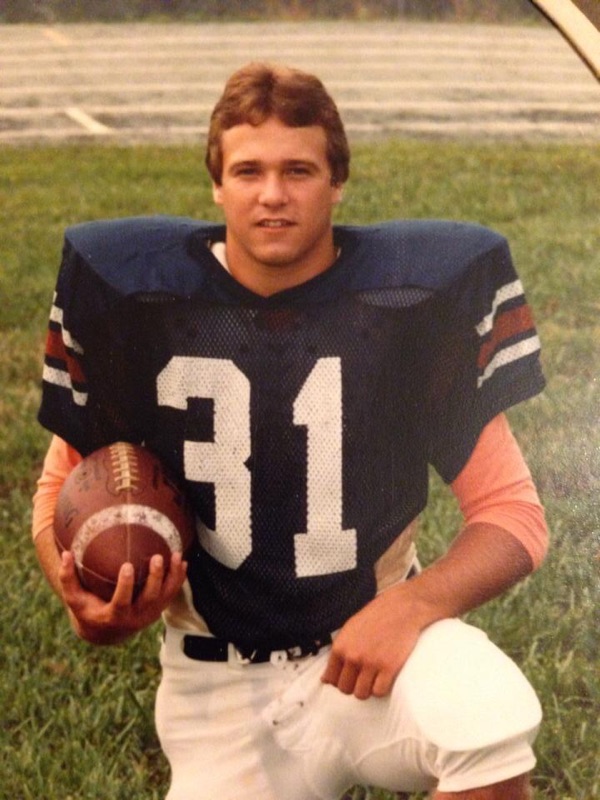 Little did the other schools know that years before, Billy had been smitten by the atmosphere and the football field on the hill above CCHS.  His older brother, Mickey, played quarterback for the Cougars allowing him a lot of insight into the CCHS program.

However, it was Cougar Mark Poe whom Billy idolized.  “I wanted to be the next Mark Poe,” said Lovely.  Poe was a thousand-yard rusher, and Billy had his sights set on that milestone for himself.  His senior season, Billy almost made it finishing with an impressive 950 yards for the 1983 campaign.

Before he became a Cougar, Billy Lovely ran wild for the Jacksboro Eagles.

The bright-eyed 12-year old watched Poe play in the 1978 season under those big bright lights at Dossett Stadium.  “There’s nothing like those bright lights, and I caught one of those little footballs the cheerleaders throw out, too.  Add in the Cougar marching band and the full stadium, I guess you could say I was raised to be a Cougar,” said Lovely.

The only downside to Lovely’s career would be the game missing injuries he sustained along the way.  As a sophomore, it was an ankle injury and then a broken wrist the next season.  He had his cast rigged so he could play, but game officials wouldn’t allow it.  He missed about 10 games between the two seasons. 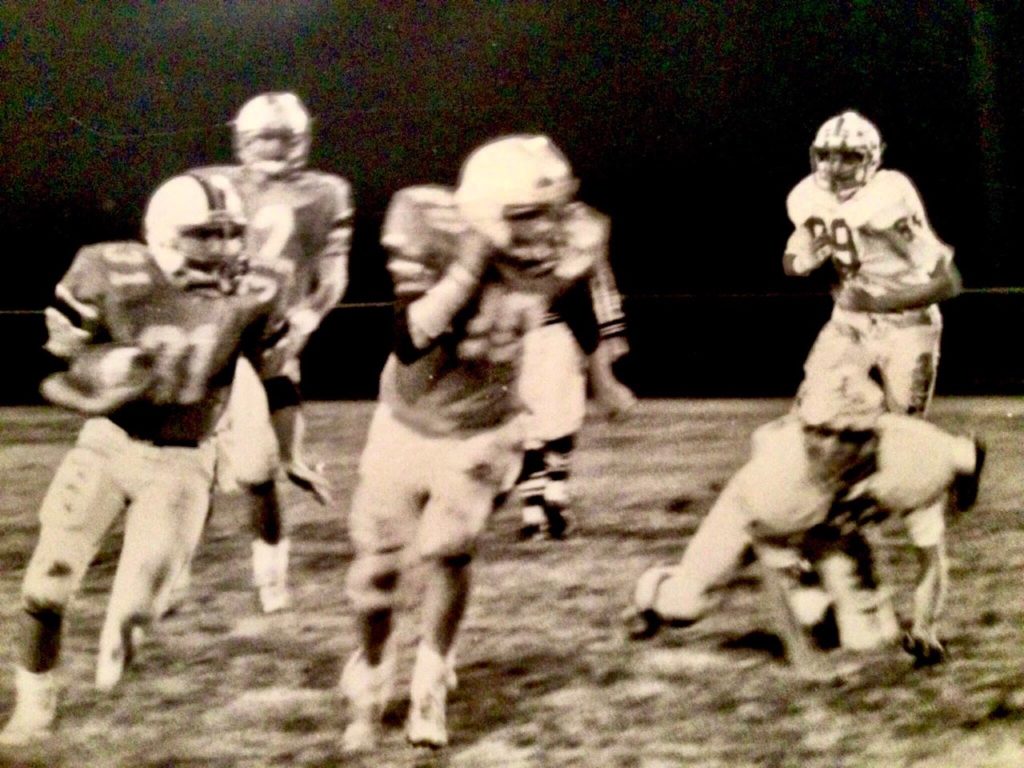 Lovely recalls some of the blocks thrown by fellow Cougar Richard Rutherford were among the best.

Memories of how excited he used to get on homecoming week came rushing back as we visited with Number 31 this week.  “Building the float, the parade, it was lots of fun,” said Lovely.  Over the years, he’s been a WLAF regular catching the Cougars on Friday nights, and it was the Ethan Jeffers Era that really brought the former Cougar back into following his old team.

Billy and Missy look forward to taking in the homecoming game tonight.  And Billy, just for old times’ sake, make sure to get you and Missy a hot dog and a pop.  (WLAF NEWS PUBLISHED – 09/18/2020-6AM)