ELK VALLEY, TN (WLAF) – The last time Corey James Idalski was arrested and placed behind bars at the Campbell County Jail was in February.  After members of the Campbell County Sheriff’s Office Narcotics Division executed a narcotics search warrant at his home last Wednesday, investigators say the 24-year-old Idalski may be on his way back.  If so, it would mark his 11th arrest in Campbell County.

“I want to applaud our narcotics investigation unit for the work they are doing in the Elk Valley community,” said Campbell County Sheriff Robbie Goins.  The sheriff went on to say, “Our department consistently faces challenges with a limited budget, and our narcotics investigators are making the best use of the funds we are provided in order to make sure the entire county is represented in the best way possible.” 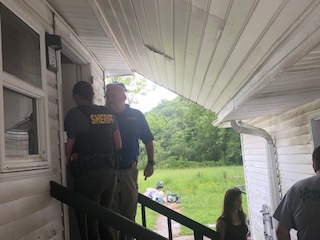 While at Idalski’s East Paul Lane residence on Aug. 5, investigators came across drug paraphernalia, including digital scales, schedule I controlled substances, likely heroin, schedule II controlled substances, believed to be methamphetamine and an unidentified amount of pills that appear to be a type of schedule II narcotic.  Additionally, a safe, an undisclosed amount of cash and surveillance equipment were discovered.

Based on the evidence collected and previous buys of narcotics during the sting operation, investigators expect charges are likely against other individuals besides Idalski.

“Even though we are spread thin, your sheriff’s department will continue to reach out to all parts of Campbell County.  That’s why I have a focused effort to encourage you to report any drug activity or concerns you have directly to me by way of our drug hotline at 423.566.DRUG (3784),” said Sherriff Robbie Goins.  (WLAF NEWS PUBLISHED – 08/12/2020-6AM)