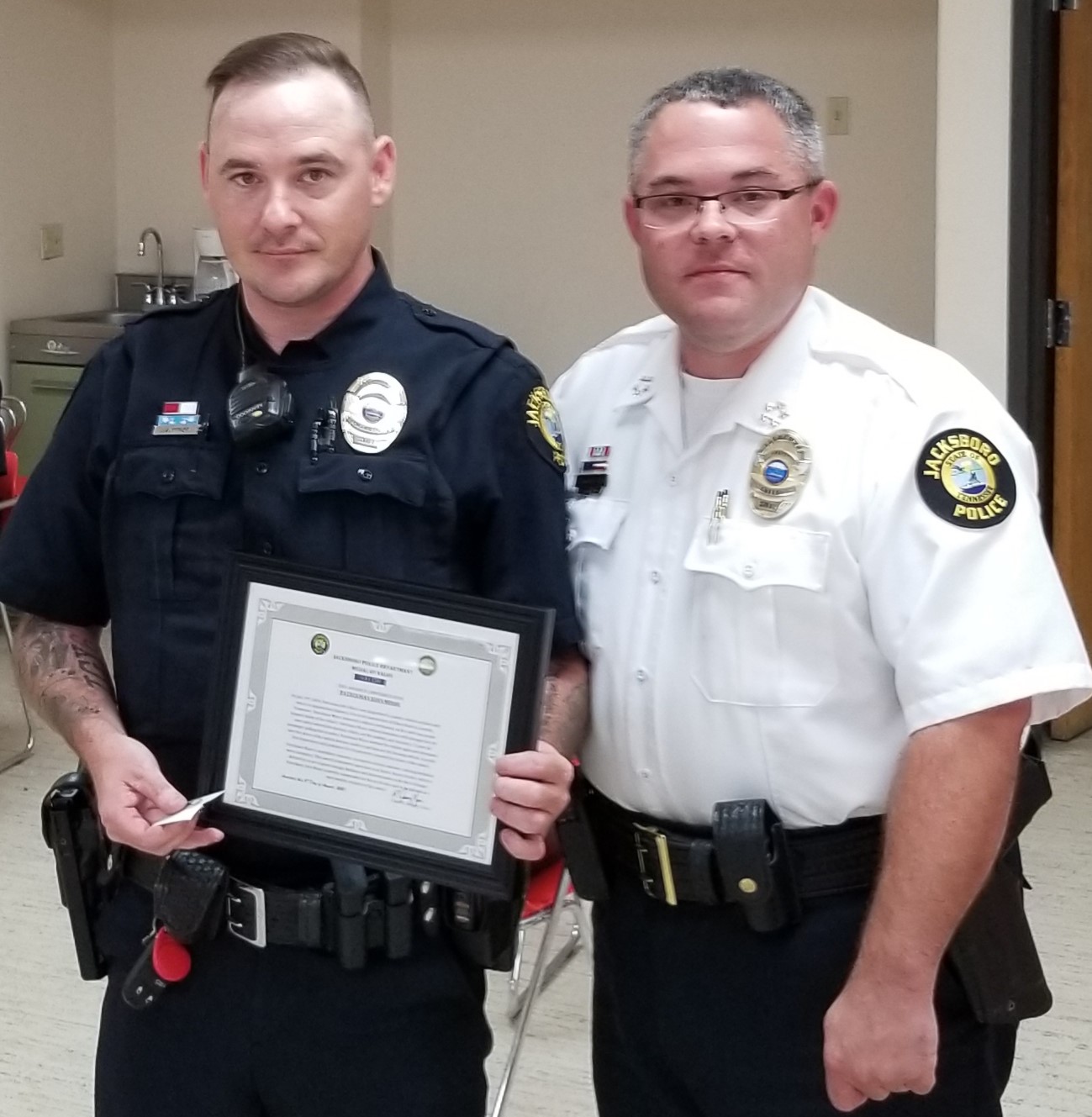 JACKSBORO, TN (WLAF) – Officer John Minor was presented the Medal of Valor at last night’s Town of Jacksboro monthly meeting. Chief Jeremy Goins shared that on July 19, Minor responded to an accident at the corner of Elkins Road. When Minor arrived, he found a 12-year-old trapped by his seatbelt inside a vehicle that was on fire. Minor went into the burning vehicle and cut the seatbelt off the youth freeing him from the wreckage. Other victims in the accident were freed by the Caryville and Jacksboro Fire Departments.

Goins had several other items before the board of mayor and aldermen. The first item was requesting permission to surplus a 1999 Jeep Cherokee and sell it on govdeals.com. The vehicle was seized during a traffic stop. He then requested to purchase a Dodge Durango for the police department, stating that he could use money from the drug fund to purchase the vehicle. Both items were approved, the final item he presented did not fair as well. Goins proposed a graded pay scale for officers, giving raises after one, three and five years. He told council that this would help with the retention and recruitment of officers. He then requested to promote Cody Chapman to Lieutenant with a .75 cent an hour raise. Theses items died on the floor for a lack of a motion to approve.

Mayor June Forstner told the board that residents on South Street were having issues with water and requested approval to have CJUC replace the culverts. Forstner then discussed some of the issues the town is currently having. First up was new construction not getting permits and the driveways not having culverts creating water issues. Next, the town is having issues with people using their recycling bins for garbage. The board’s solution to the issue was anyone caught doing this will lose their recycling bin. The issue is costing the town money. The mayor reminded citizens to complete the census, so far the town has had 62.8% of the citizens participate in the census.

Lack of internet has been an issue for the fire and police department. Comcast quoted the town a commercial rate of $138.45 per month per site for the service. The board agreed to have the internet installed.

A bid of $7,000 was received for the purchase of a 1998 International Truck for the street department was received. The truck will be used for the town’s leaf vacuum. The cost of installing the vacuum on the truck is $3,500.

The board approved the hiring of two auxiliary firemen, Homer Trett and Brandon Seidner.

In final business of the night, Aldermen Jerri Starrett requested the board look at the cost of getting cellphones for the police officers and one for each fire truck.  (WLAF NEWS PUBLISHED – 08/07/2020-6AM)