TOP PHOTO:  LUB crew members shutdown one lane of Highway 25W near the Jellico Highway Church of God beginning Sunday morning at daybreak to restore power to about 100 customers. 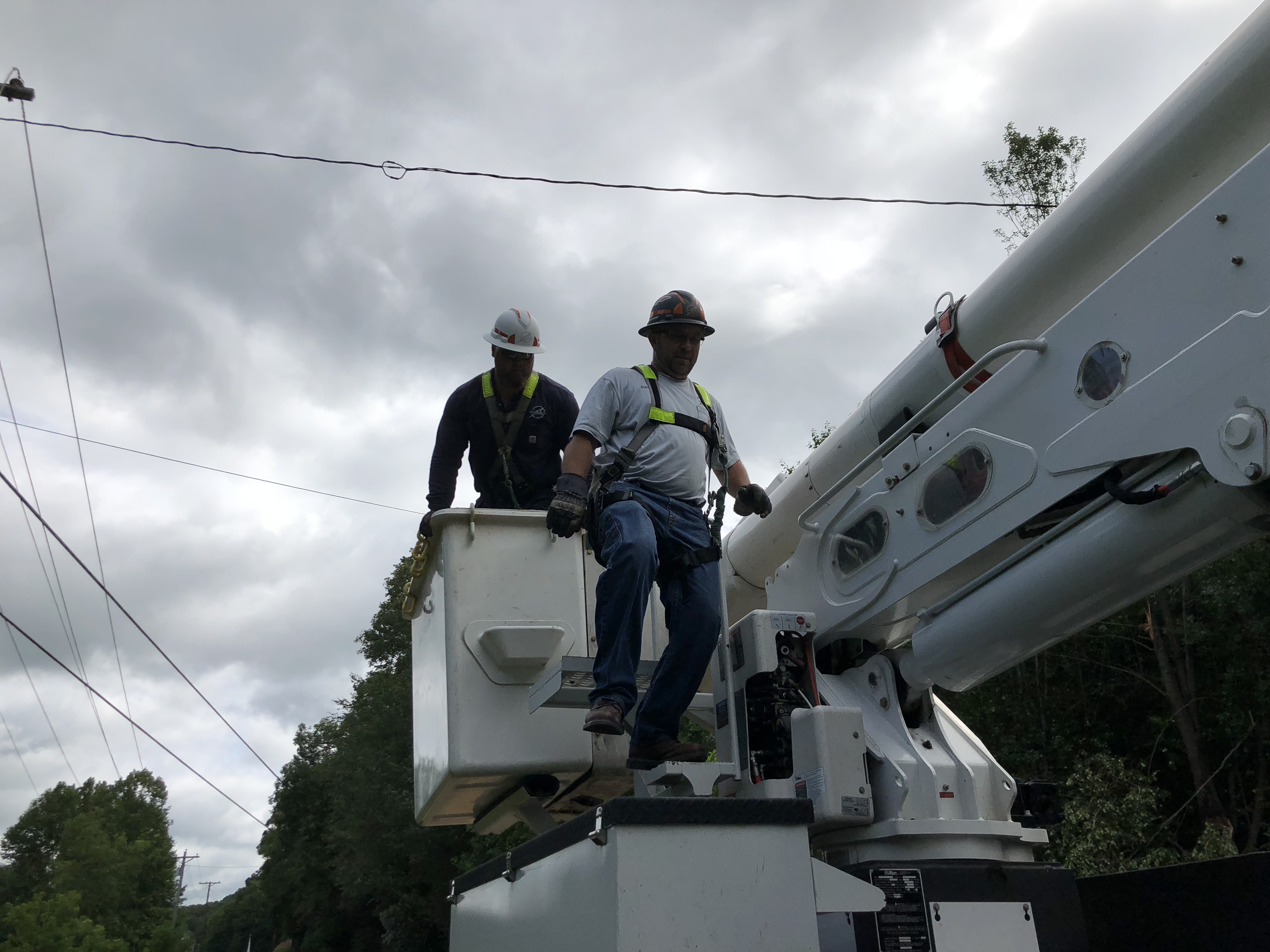 Tyler Brammer (back) and Steve Reynolds climb out of a bucket as they work on a pole on Jellico Highway.

LAFOLLETTE, TN (WLAF) – The after effects from Friday’s severe thunderstorm that literally blew through Campbell County linger this morning.  However, for the more than 3,700 LUB customers who were without power due to the storm, they now have their utility back in working order except for five locations where a total of nine customers are still in need of their power being restored. 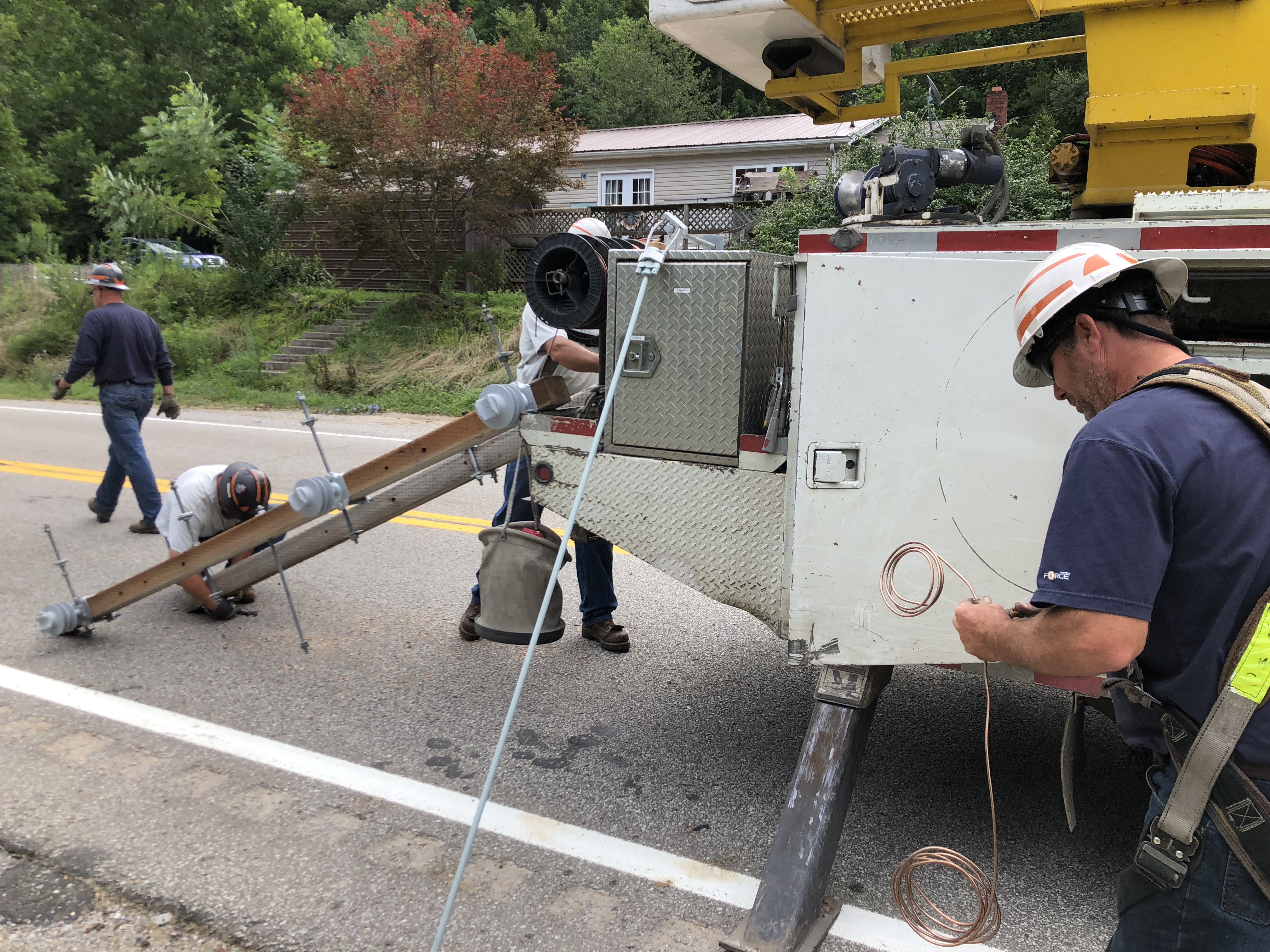 (Left to right)  Brian Temple, Richard Nelson, Brad Ivy and Wes Caldwell are prepping a cross arm for a new pole that was just put up, because the other pole broke apart.

LUB crews hit the ground running at 5:30 pm on Friday to begin restoring power.  They were expecting a storm, but not one quite to the extreme of this one.  It literally hit every area of the valley from Caryville all the way to Speedwell.  “It was so widespread which made it extra challenging as opposed to it being in just one or two areas,” said Wes Caldwell.

It was all hands on deck for the LUB staff.  Line truck operators, tree trimmers, engineers and even water department personnel worked all weekend.  A couple of linemen began their Friday at 5 am while many others started their Fridays at 7 am, and all did not stop until 10 pm on Saturday before starting right back at daybreak on Sunday.

“Nine customers are still out, and these are some that we can’t hook back up until their equipment is repaired.  We pretty much had everyone back on within 48-hours,” said LUB General Manager Kenny Baird.

Herb Tackett and Knud Salveson (right) direct traffic down to one lane around the work zone on Highway 25W North.  There were two crews each working on different power poles and lines.

Caldwell said, “We’ve had so many locations where it has been a real project to put our customers back online.  I mean, it’s not been a repair.  It’s been a total rebuild like the one here on 25W.” Straight line winds ripped up the valley from Caryville to Speedwell.  The National Weather Service noted that winds during Friday night’s storm ranged from 60 to 70 miles per hour.  The threshold wind speed for a hurricane is 74 MPH.

This is part of a broken pole that the linemen were replacing. 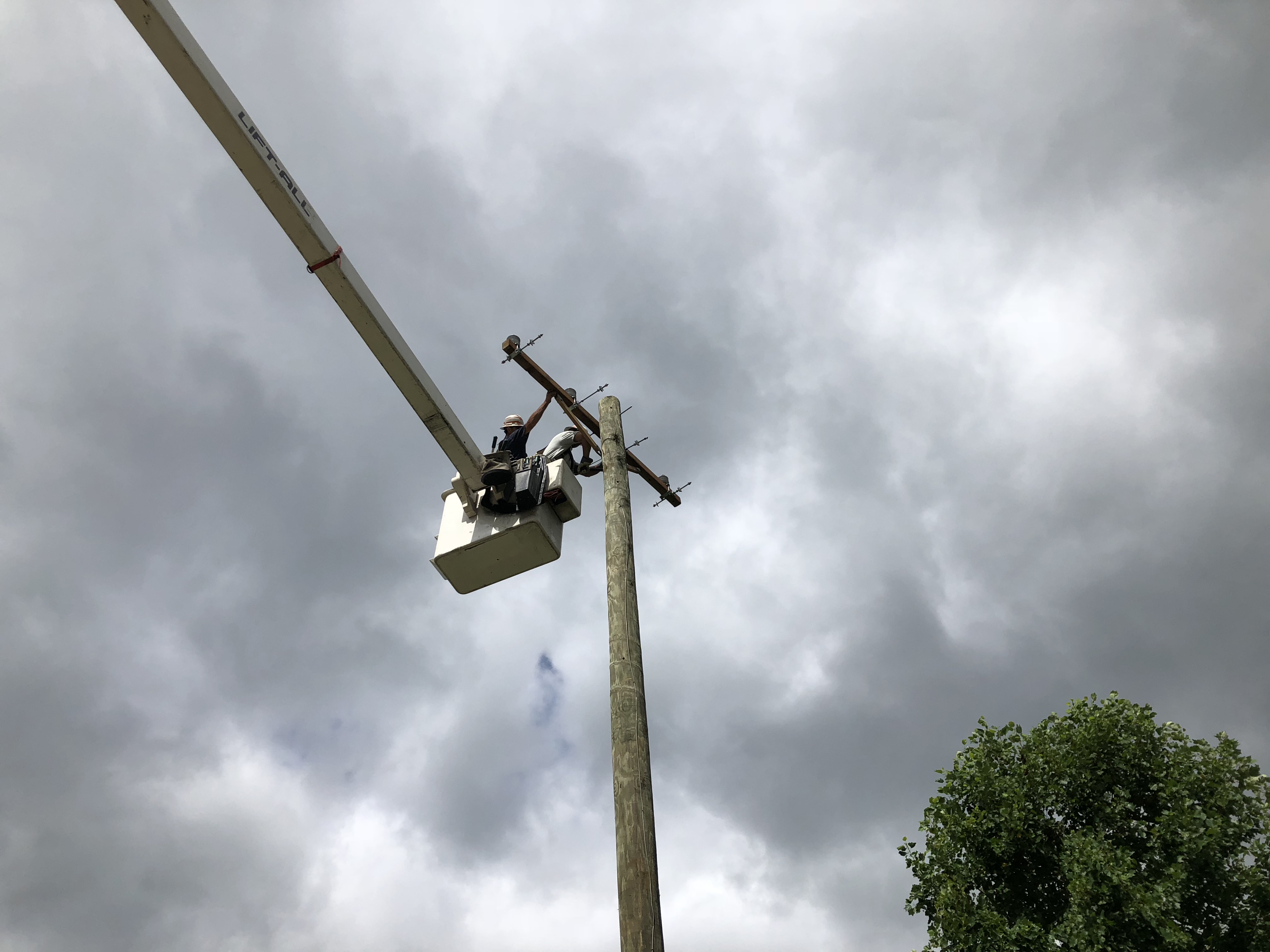 Baird said, “They (LUB employees) always go above and beyond when duty calls. They work tirelessly and do anything we ask of them. The community couldn’t ask for a more dedicated group when it comes to caring about the welfare of our customers. I’m proud to be affiliated with such a fine group of individuals.”  (WLAF NEWS PUBLISHED – 08/03/2020-6AM)