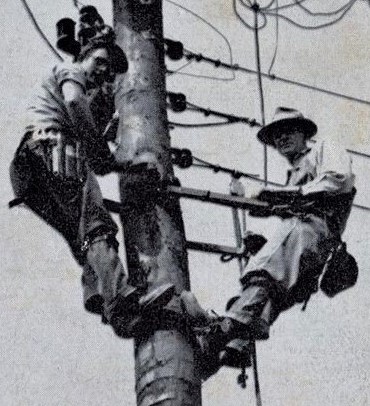 Mystery solved.  Kathy Queener Wilson confirmed what Charlie Davis thought, and that is that the LUB worker on the right “is” Red Hatmaker along with Garland Eubanks (left).  Thank you, Kathy and Charlie!
LAFOLLETTE, TN (WLAF) – On Thursday, WLAF’s Charlie Hutson shared this 1953 La Follette Utilities Board photo (above), and it prompted a few phone calls, tweets and emails.
It was known that the man on the left in the photo is that of Garland “Poppie” Eubanks.  However, the jury is still out on just what is the name of the man on the right in the picture.
Gene Shears called in saying that there were only a few pole climbers in those days at the utility, and he thought it might be Dennis Cordell or a man named Skeen. Shears added that Cordell was born in 1904, and was generally quick to point that out.
Another person speculated it is Tom Queener.
We then caught up with Charlie Davis in East La Follette, and he was pretty sure that it’s Red Hatmaker; not Cordell or Queener.  Since Charlie was around in those days, we felt fairly confident that it was Red.  Then Charlie called back later saying that it could be Ed Whitten.  The mystery continues.
If you have  a clue, please let us know at wlaf@1450wlaf.com.  (WLAF NEWS PUBLISHED – 07/31/2020-6AM)
Thursday’s story:
WLAF’s Charlie Hutson shares a photograph from back in the 1900s, about 1953.  A couple of guys from the La Follette Electric Department, nobody knew it as the utility department, are hooking up the football stadium lights at the new La Follette High School, now the La Follette Middle School in the photo above.
The guy on the left was the new pup, a fellow by the name of Garland “Poppie” Eubanks.  Hutson doesn’t know the other La Follette Electric employee.  He’s received several different names, but no name has been confirmed.  This picture was the front cover for the La Follette Electric Department’s 14th annual report in June 1953.
Eubanks, 28-years- old in the photo, went on to an unprecedented career at the La Follette Electric Department, now the La Follette Utilities Board.  Though he passed away in 2017, he had a career that LUB General Manager Kenny Baird described as “one that will never be matched.”  Eubanks, a World War II veteran, served LED and LUB for 58-years and was a member of the La Follette Church of God for 67 years.  (WLAF NEWS PUBLISHED – 07/30/2020-6AM)

One Reply to “Mystery solved. It’s Red Hatmaker on the pole with Garland Eubanks.”