This tree is over Old Highway 63 at Caryville.

LAFOLLETTE, TN (WLAF) – A storm rolled through Campbell County late Friday afternoon living up to its billing of a SEVERE THUNDERSTORM WARNING.  Heavy rainfall and gusty winds knocked out power and laid down some trees and utility lines. Reports of a tree down on West Hemlock Street in La Follette along with utility lines down near the Ford Town Baptist Church were radioed in by La Follette Police Officers.  Also in La Follette, a tree is over a  power line on Claiborne Road right before the High Knob Road split.

La Follette Public Works Director Casey Boshears said, “It’s going to be a long night.  We have crews out, and LUB has its folks out working to restore power.  Boshears says that Loop Road is shutdown, and if folks don’t have to be out to please stay in. 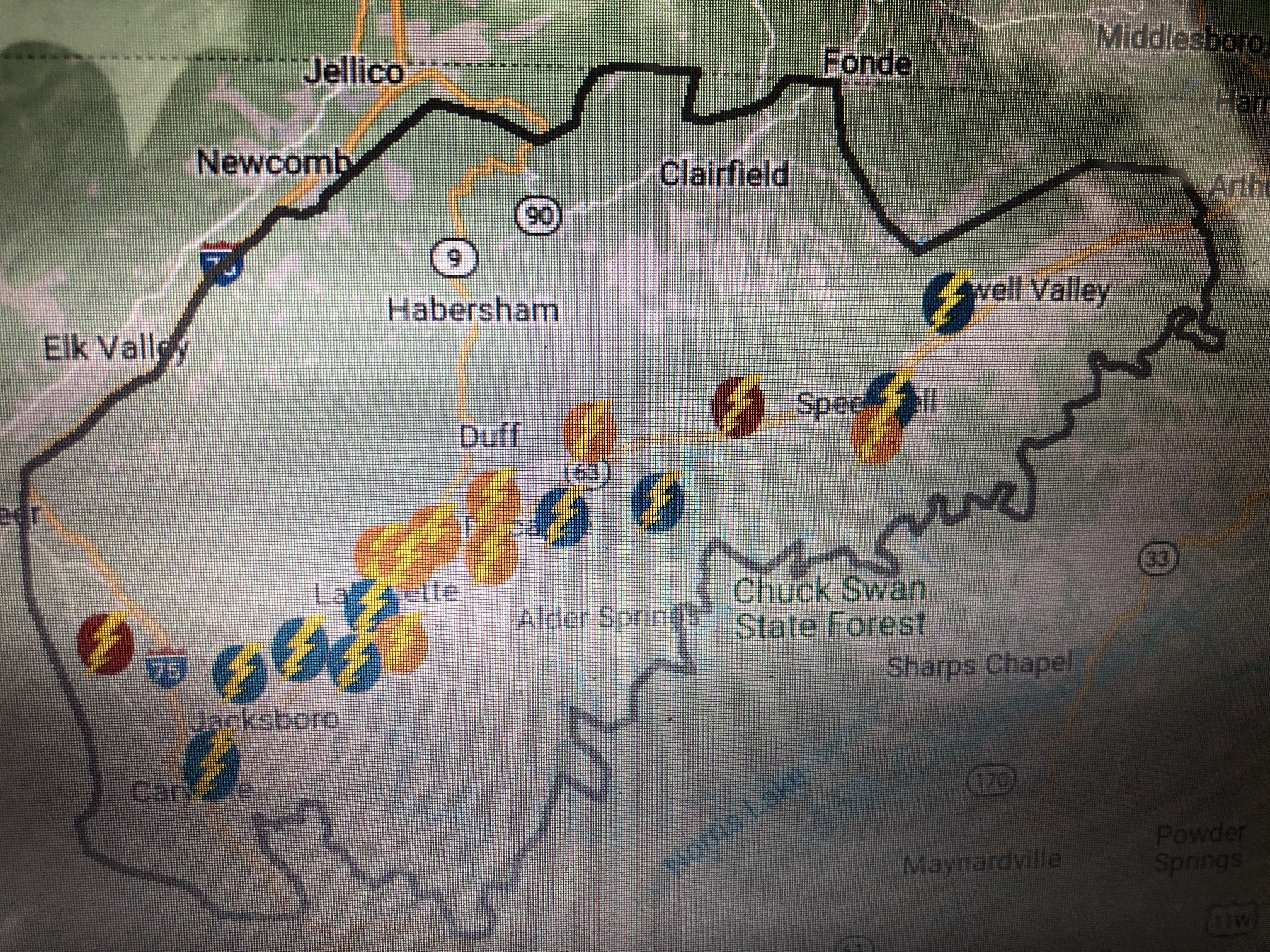 The storm appeared to have settled into the valley and just kept heading eastward leaving down trees and powers lines in its wake.

At 6:45 pm, more than 3,400 LUB customers were without power.  The hardest hit outage areas are Old Highway 63 through Red Ash, Royal Blue and Titus Hollow, primarily up the west side of I-75, coupled with major outages in the area around Flat Hollow Road and Old Middlesboro Highway.

LUB General Manager Kenny Baird issued this statement to WLAF just moments ago.  “We are currently experiencing a large number of outages throughout our service territory. There are nearly 3000 customers without electricity at this time. Our phone lines are busy with calls. If you cannot get through to report your outage – we apologize. However, you can report your outage by using LaFollette Utilities’ mobile app (available in the Apple Store and Google Play Store).   We are working hard to restore services as quickly and safely as possible.”

The La Follette Fire Department was called to a home on West Walden Street just after 6:30 pm.  The power box on the back side of the home was reported to be on fire.  A tree was reported to have fallen on a house on East Prospect Street.

“We have 25 or more trees down.  That’s mainly up the valley around Cross Valley and Doaks Creek Roads; mainly in the Eastern portion of the county, “said Campbell County Road Superintendent Ron Dilbeck.

WLAF listeners are calling in reporting lots of trees down on Jellico Highway on the North side of La Follette.  Calls have also come in detailing several trees on the ground and on power lines on Old Middlesboro Highway.