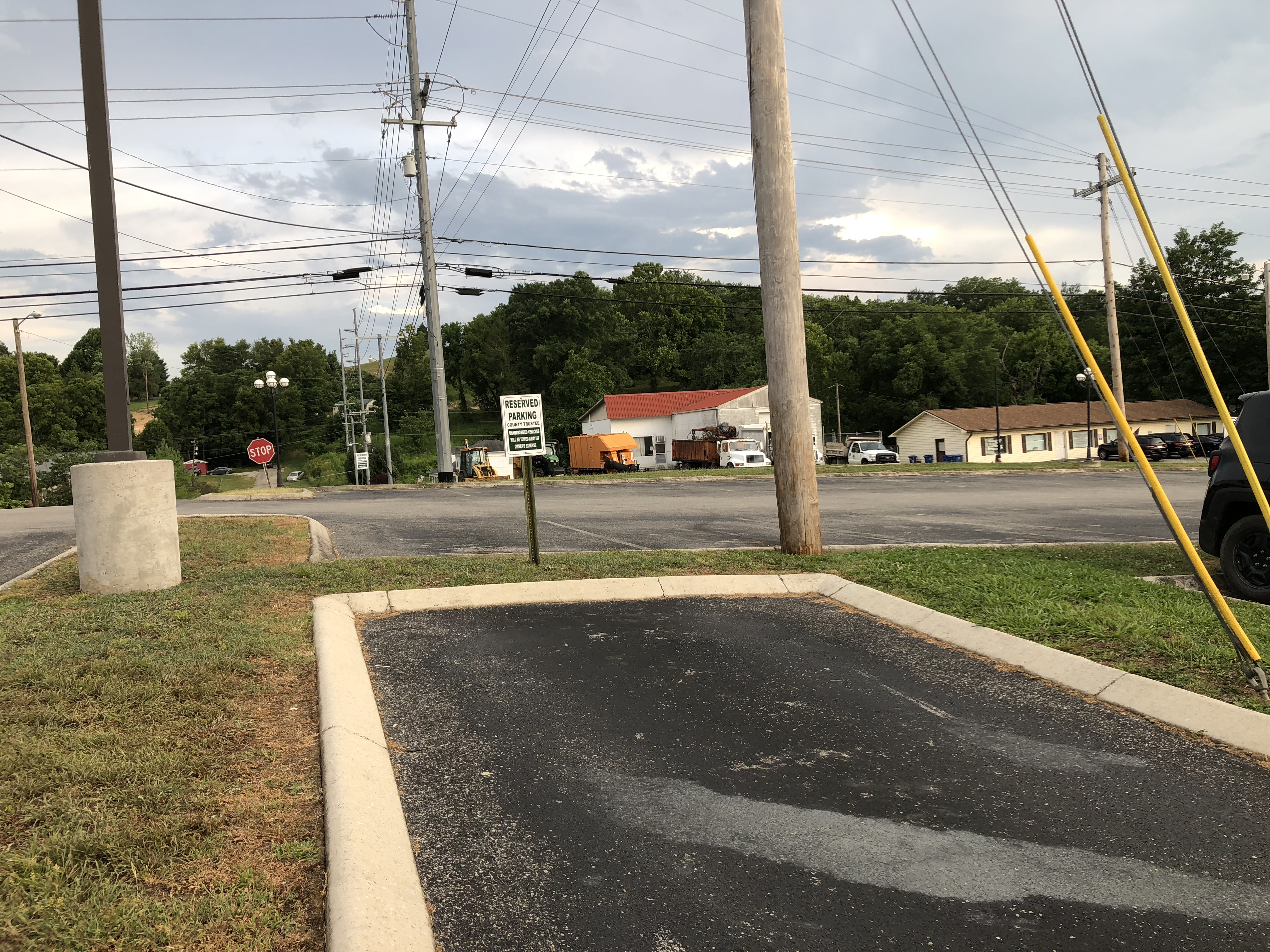 According to Commissioner Ralph Davis, the state said “Those spots should not be reserved.”  He was talking about the signs like the two, of several, above.
Commissioner Ralph Davis made a motion for all special parking signs at the court house to be removed, so it could return to “first come first served.”  However, the motion failed with a nine to four vote.  The issue had been discussed multiple times by the commission and was the main topic of a recent building and grounds committee meeting.  At that meeting, it was suggested by Davis that 13 parking spots in the top lot be designated for customers only.  After that motion failed for lack of a second, Davis contacted the state with questions.  At last week’s commission workshop, Davis reported to the commission he had been in touch with the state regarding courthouse parking and the special parking signs.  According to Davis, the state told him “the taxpayers own both of those parking lots and by law, we don’t have the right to tell them they can’t park there,” Davis said, adding that the state said all the “special parking signs had to come down” other than the handicap parking signs and the veterans parking signs. According to Davis, the state said “Those spots should not be reserved.”
Commissioner Rusty Orick has in the past referenced complaints from the public regarding the courthouse parking and was one of the four commissioners to vote in favor of removing the special parking signs so it could return to first come first served. At last week’s work shop, Orick said he thought “the public would feel better if the signs were removed.”  After the motion failed at Monday night’s commission meeting,  Orick asked if anyone had a suggestion of how to “fix the situation.”
Chairman Johnny Bruce asked  Orick to get some information from the state so that it would “give the county some guidance” on how to proceed.
Commissioners approved the other motion made by Ralph Davis, which was to allow Bobby Vann’s office to hire two employees at the court house to check temperatures at $10 an hour. According to Davis, hiring these part- time employees at $10 an hour will save the county money since it had been paying a nurse $30 an hour to perform the same duties.
The hiring will be funded from monies left over in the county mayor’s budget, according to officials.
Commissioners discussed and approved a billing change for the county E.M.S. According to Orick, the county is behind on pricing updates and needs to increase it so Medicare can be billed the correct price and the county won’t lose funds.
Other business included the approval of a sanitation department request for a mechanic to get a $1 on the hour raise after he received his mechanic certification. According to Davis, the raise had been brought up over a year and a half ago and that the sanitation department head had the funds for the raise in his budget. The mechanic has since received his certification, which is why the raise request was submitted.
Another motion approved was for the county to apply for a Blue Cross Blue Shield grant that would provide $750,000 to create a healthy area/park. The county mayor’s office will be handling the grant writing. The grant application has to be made by the end of August.
Commissioners approved the goals and guidelines for the infrastructure committee as well. These goals had been established during the first infrastructure meeting held last week.
The commission recessed Monday night’s meeting until July 27 at 6 pm, at which time they will come back in session via Zoom to do the tax levy resolution, as well as the finalizing of the county budget.  (WLAF NEWS PUBLISHED – 07/21/2020-6AM)