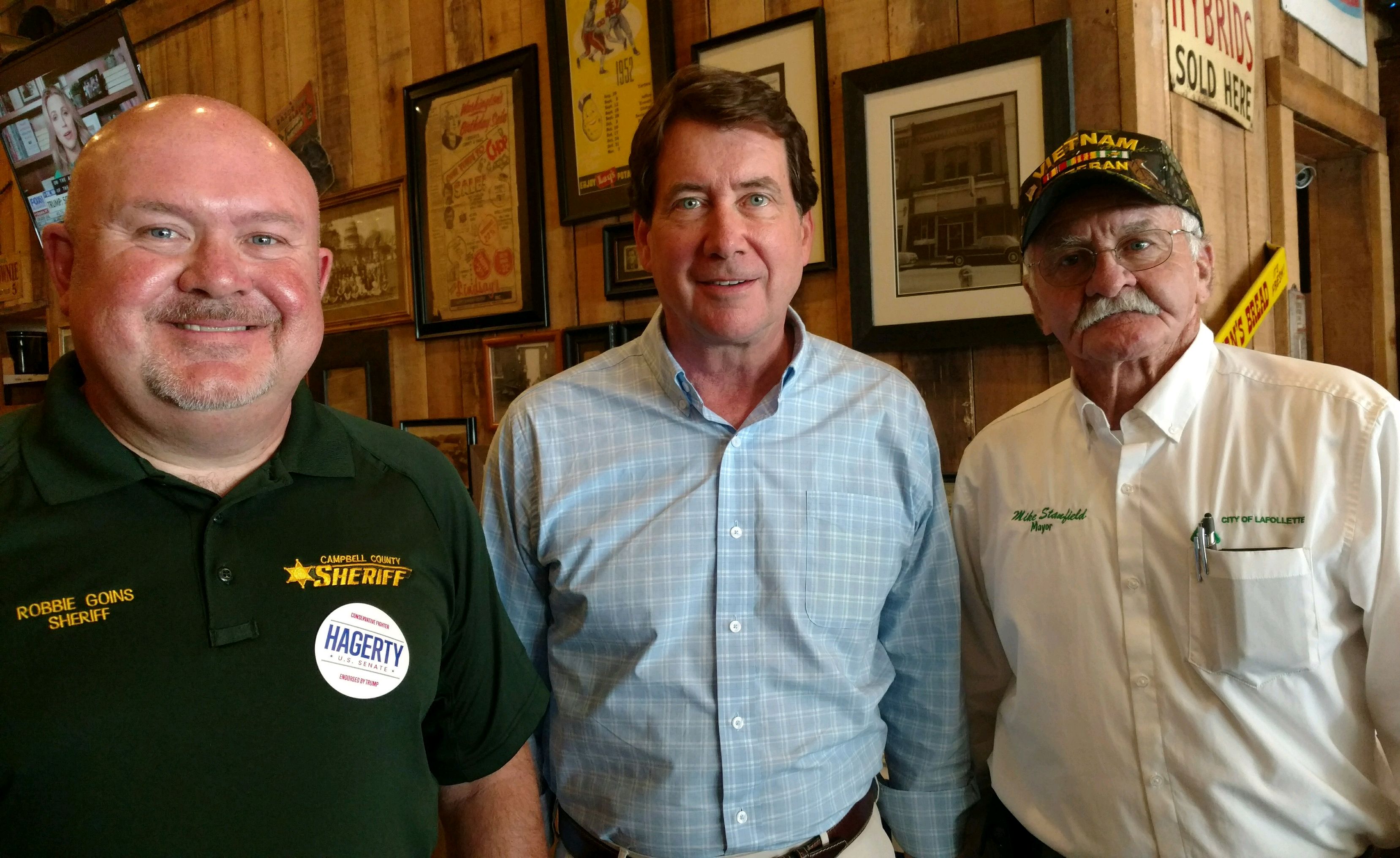 Left to right:  Campbell County Sheriff Robbie Goins, United States Senate candidate Bill Hagerty, and LaFollette Mayor Mike Stanfield.  Hagerty made a stop at the Royal Lunch.
LAFOLLETTE, TN. (WLAF) –  United States Senate candidate Bill Hagerty made a brief campaign stop in LaFollette at the Royal Lunch on Tuesday.
Campbell County Sheriff Robbie Goins helped set up and host the political visit.  He, along with several members of his staff were on site to welcome the prospective senator.  LaFollette Mayor Mike Stanfield, along with Campbell County Mayor E.L. Morton were at the event to offer their endorsement of the Republican candidate.  About 20 people gathered to listen to Hagerty who spoke on his  campaign platforms. Topics  included his support of President Donald Trump and Trump’s endorsement of him, along with his “concern for the country.” 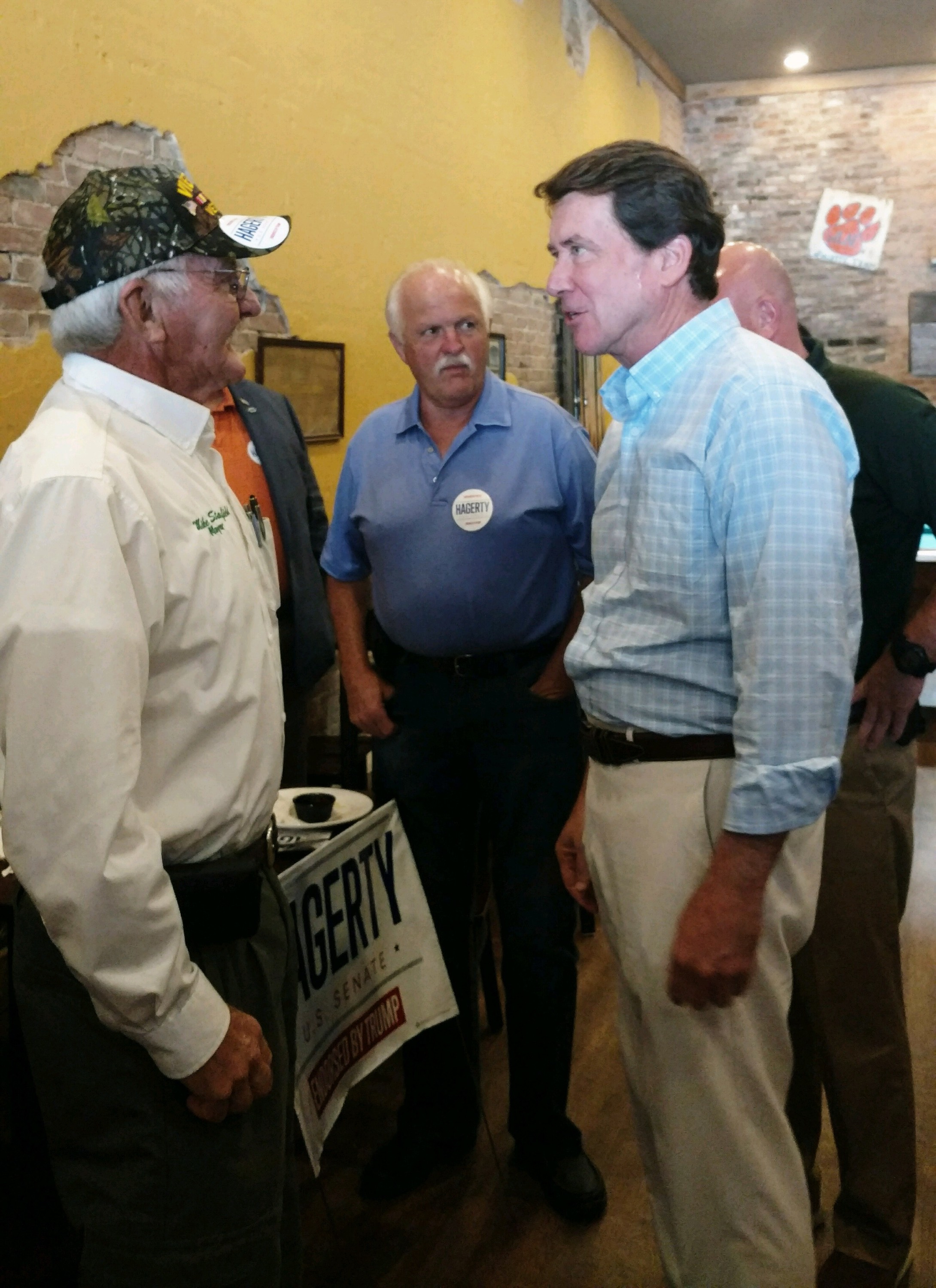 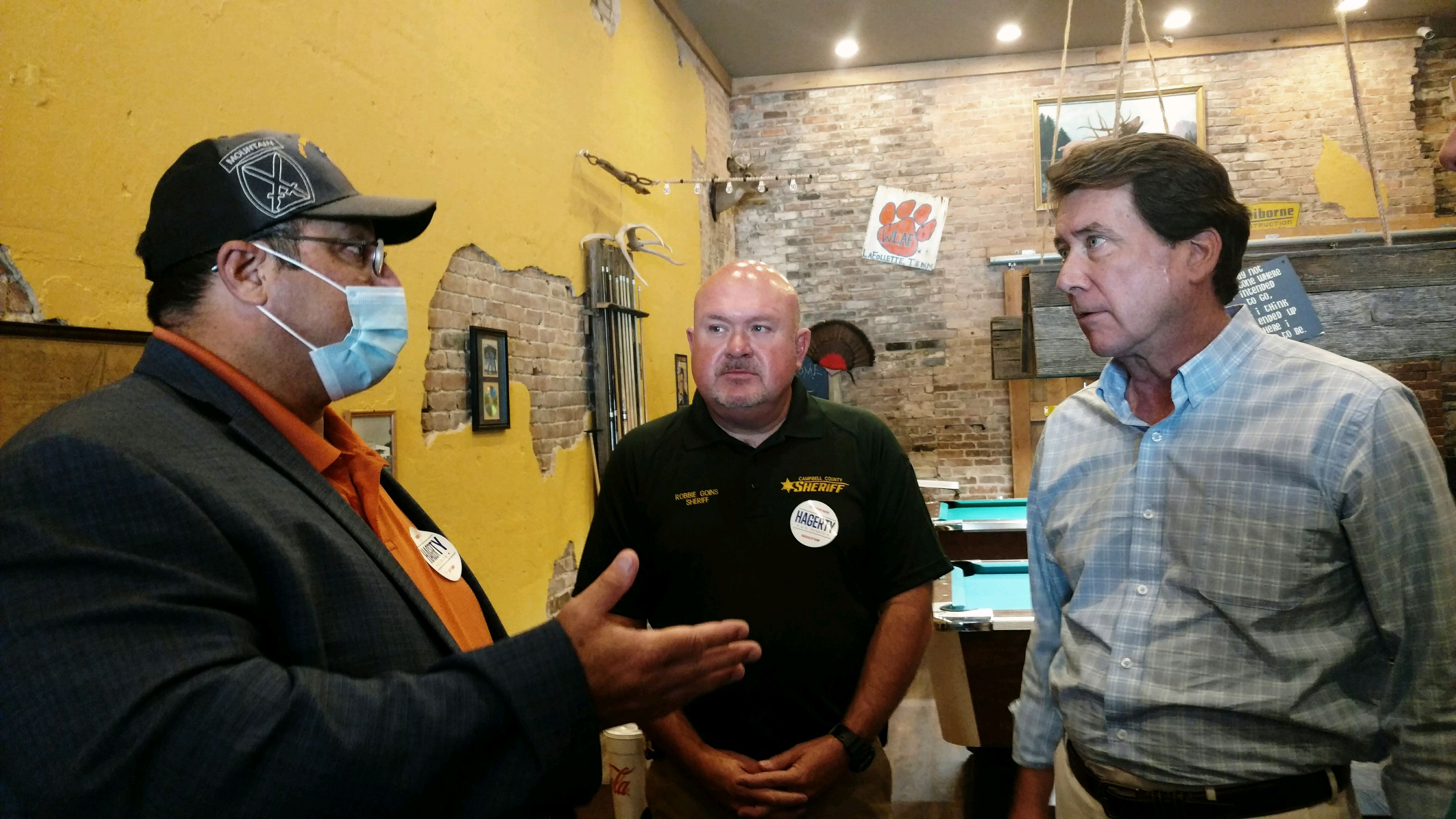 At the Royal Lunch on Tuesday, United States Senate candidate Bill Hagerty (right) visits with Campbell County Mayor E.L. Morton (left) and Campbell County Sheriff Robbie Goins (middle).
Other talking points at the political event included his stance on building the President’s border wall and “illegal immigration.” According to Hagerty, he will “fight to give border officials and I.C.E. the support, resources and technology they need to combat the growing crisis at the border.” He also told  Goins that he would “stand in support of law enforcement” and had a tough stance on crime. “I want all law enforcement officers to know across the state that I’ve got your back.” He said he also stood with the “military and veterans.” 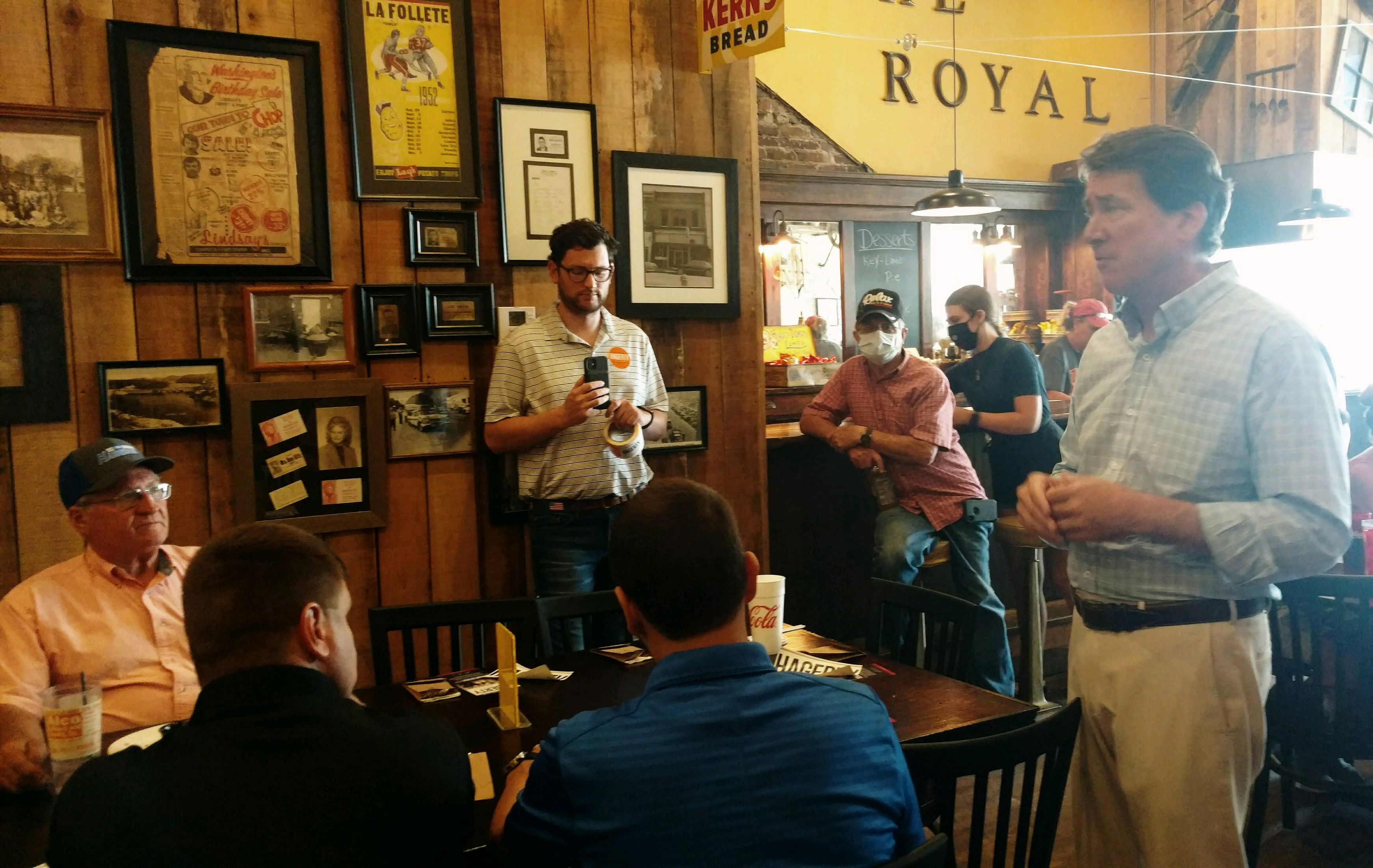 United States Senate candidate Bill Hagerty spoke to around 20 people at a political campaign stop on Tuesday at the Royal Lunch.
Hagerty said he felt “Planned Parenthood should be defunded” and also spoke on “censorship of conservative views” and the work that Senator Marsha Blackburn had done to “push back against it.” “This censorship has got to come to an end.  As your next United States Senator, I want to stand right next to her and partner with her to push back and make certain that our conservative voices can then be heard. What disturbs me most of all is weak-kneed Republicans that won’t stand up and are in fact going in the other direction. We have some senators who have aligned themselves with this Marxist organization called BLM, Black Lives Matter.  Make no mistake, this is a Marxist organization trying to push us towards socialism,” Hagerty said.
Hagerty talked economics briefly, saying he would “stand up against China and bring our companies back from China. I will make ‘made in the USA’ a slogan again,” Hagerty said.
Hagerty closed by saying President Trump “needs an ally to stand up for the conservative  Tennessee values we all hold dear. I’m going to stand strong with him to end illegal immigration, I’m going to help him build the wall and stop sanctuary cities, I will stand for our second amendment and I will stand for life.”  (WLAF NEWS PUBLISHED -07/08/2020- 6AM)