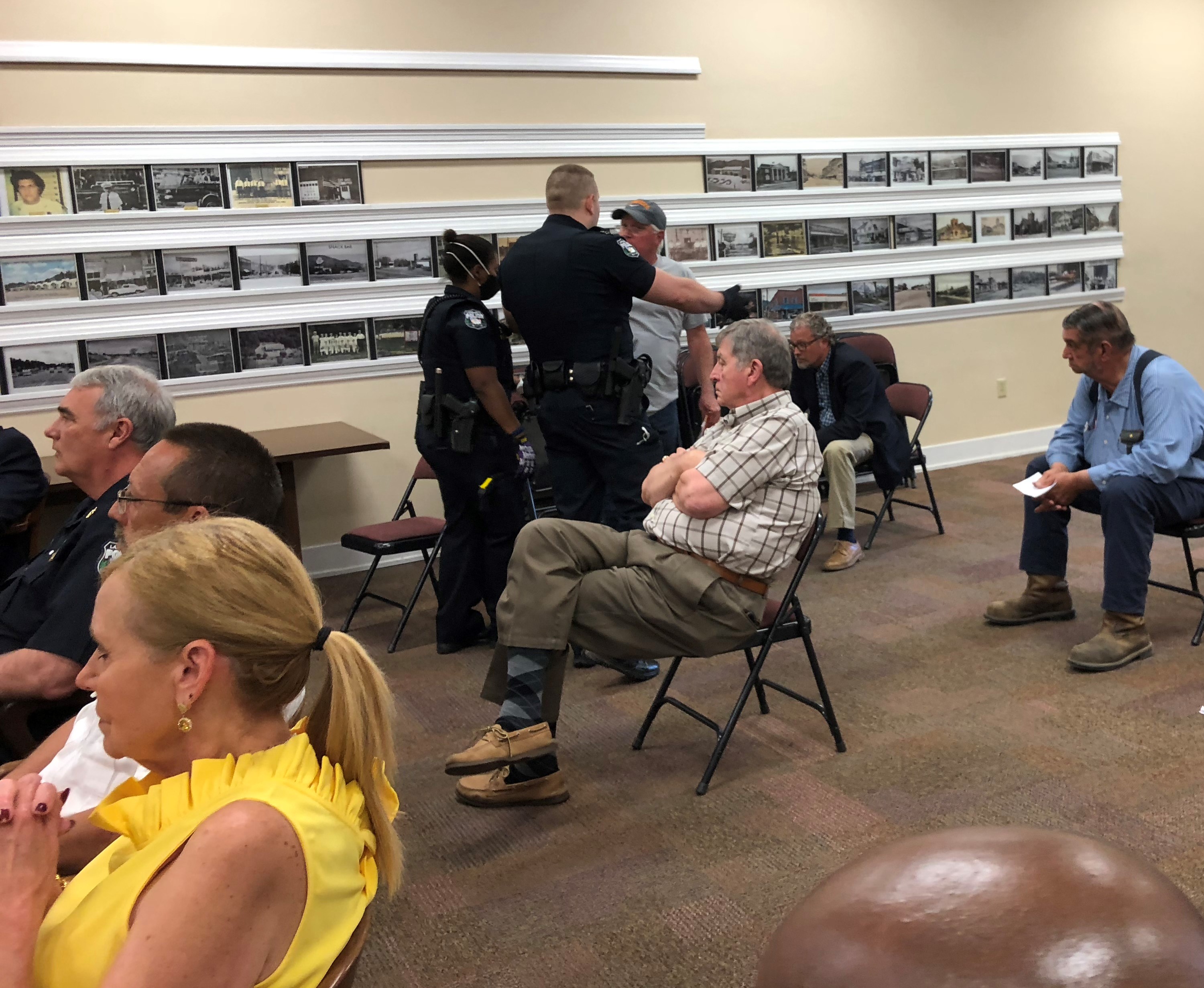 Knoxville contractor Jim Emmert, who claims the City of La Follette owes him nearly $3,000, was escorted from Tuesday’s council meeting after a heated discussion while addressing the council.

LAFOLLETTE, TN (WLAF) – In March, Jim Emmert, a Knoxville based contractor, came before the LaFollette City Council alleging in June 2019  he was contacted by City Administrator Jimmy Jeffries who asked him to come to LaFollette and complete assessments on properties damaged by flooding. At that time, Emmert told council he spent two days looking at properties and an additional two days in his office preparing estimates. The bill totaled approximately $2,800. WATCH the meeting HERE. 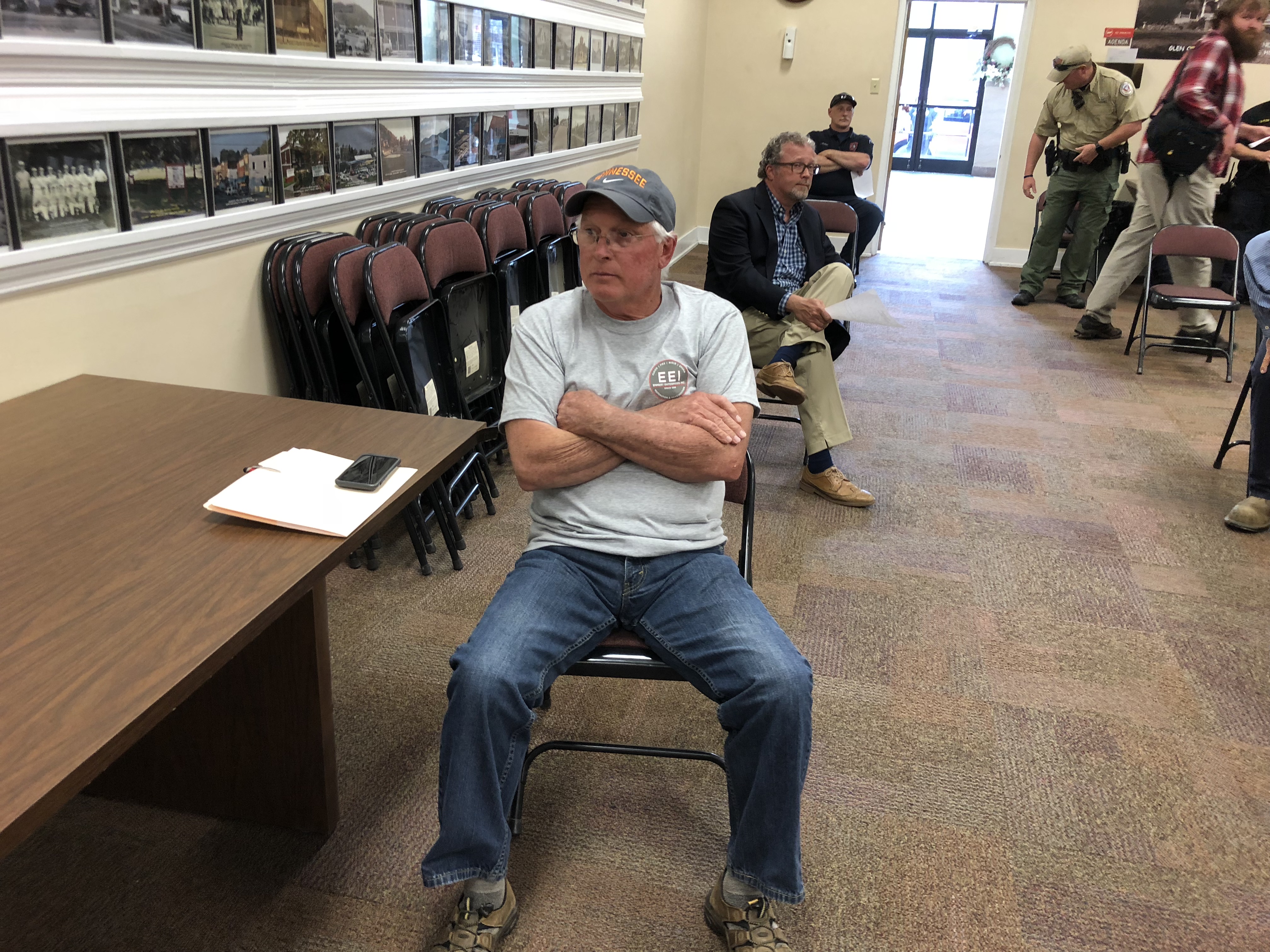 Jim Emmert (above) addressed the City of La Follette council for more than half-an-hour back in March and was on his way to a lengthy address Tuesday night before he was escorted out. 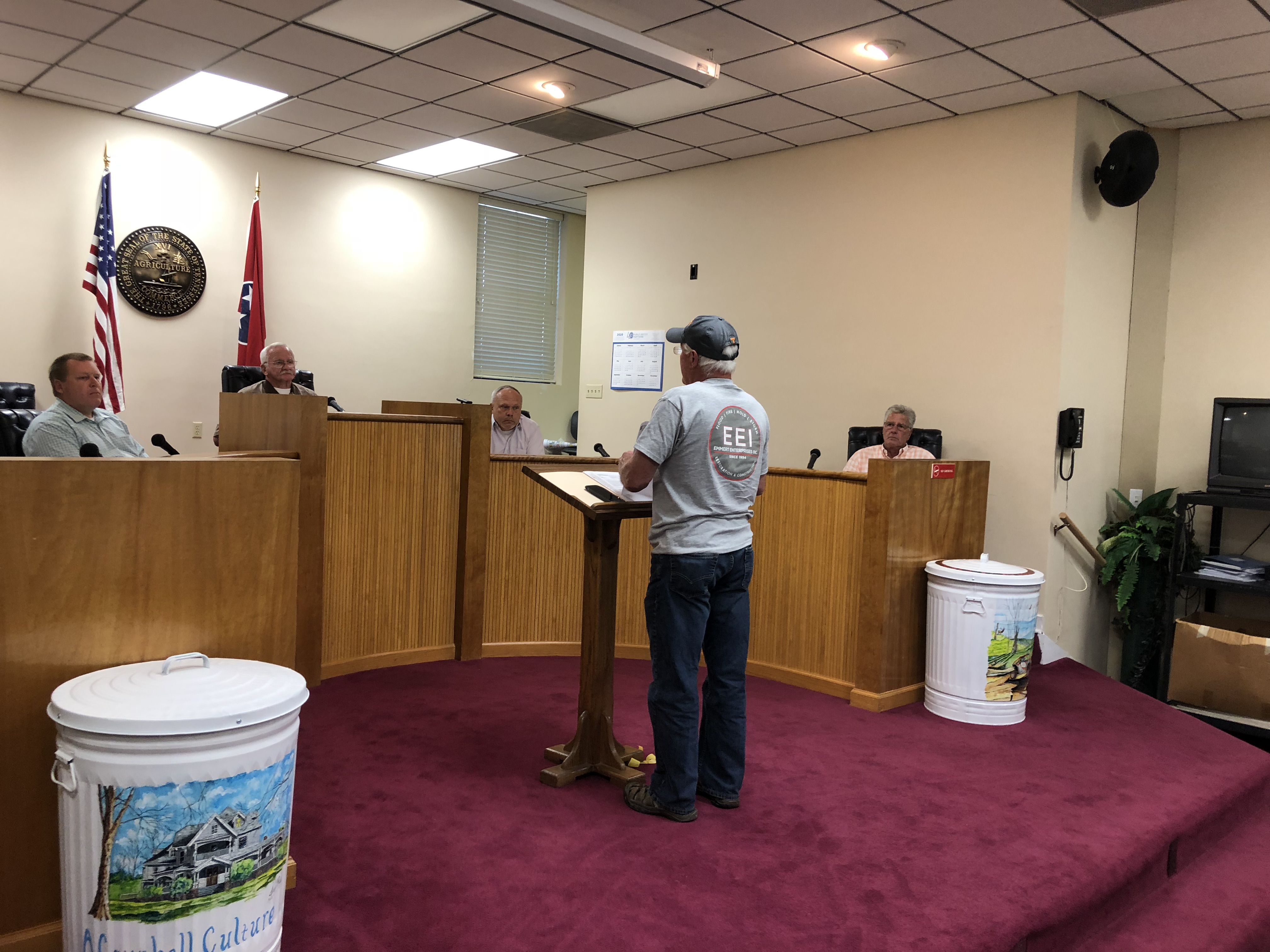 On Tuesday, March 3, members of the council requested an itemized invoice from Emmert for his services. Last night, Emmert came back in front of council to discuss his itemized invoice. After spending several minutes discussing, the issue at hand,  Jeffries was given the opportunity to tell his side of the story. Jeffries told council he did ask Emmert to come and complete damage estimates for the city. But during the process, Emmert  began to solicit business for his company from the church and Community of Health of East Tennessee. Jeffries explained this was a conflict of interest since he was representing the city for damage estimates and asked Emmert to leave at this point, after only being in LaFollette for an hour and a half, but he refused. Emmert finally left the properties when City Codes Enforcement Officer Daniel Foster threatened to arrest him if he did not leave the properties.

After several minutes of heated discussion Tuesday night, Councilman Mark Hoskins told Emmert “You’re not telling the truth sir.”  Eventually Emmert was escorted from the building by two LaFollette Police Officers. After the meeting concluded, Jeffries spoke with WLAF saying “The only thing I am guilty of is, not letting him take advantage of a church and Community Healthy of East Tennessee. I will not let anyone take advantage of LaFollette or Campbell County.” 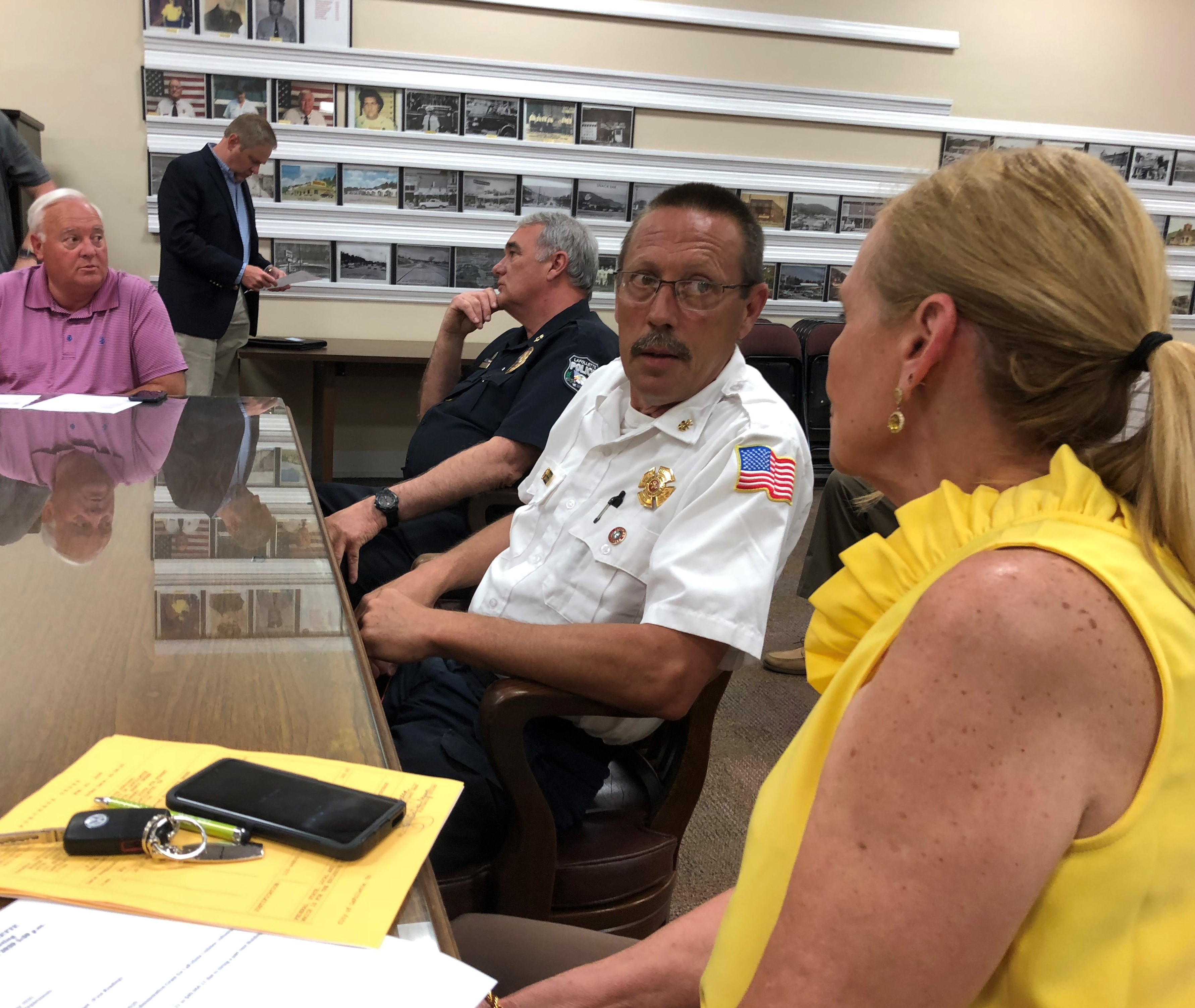 Jimmy Pack was voted in last night as the City of LaFollette Fire Chief. Pack has been acting chief since January when Fire Chief Charles Eldridge retired. There were three applicants for the position; LFD Lt. Dusty Davis, LFD Firefighter Joey Gilbert and Pack.  While Pack was attempting to formally thank the mayor and council he was called away to a fire.

Discussion of reducing the codes enforcement salary by $3,000 was on the agenda. The reduction was intended to pay for an outside commercial building inspector to do building inspections since Codes Enforcement Officer Daniel Foster is yet to pass the codes test.  After discussing the issues for several minutes, the council decided to table the issue until next month. There were questions about how long Foster had to pass the required testing for the position to remain in the position since he has not passed the test. Last year, LaFollette faced a similar situation when then Codes Enforcement Officer Daniel Smith, replaced by Foster and who also did not pass the test, was voted out of that position and returned to the police department.

It has since been learned by Jeffries that the information used last year where Smith’s time limit to pass the test was concerned was incorrect.  That prompted Councilmember Ann Thompson to say “If that’s the case, then Daniel Smith needs to be put back in that position.”  Hoskins said,  “We need accurate information before proceeding with this.” 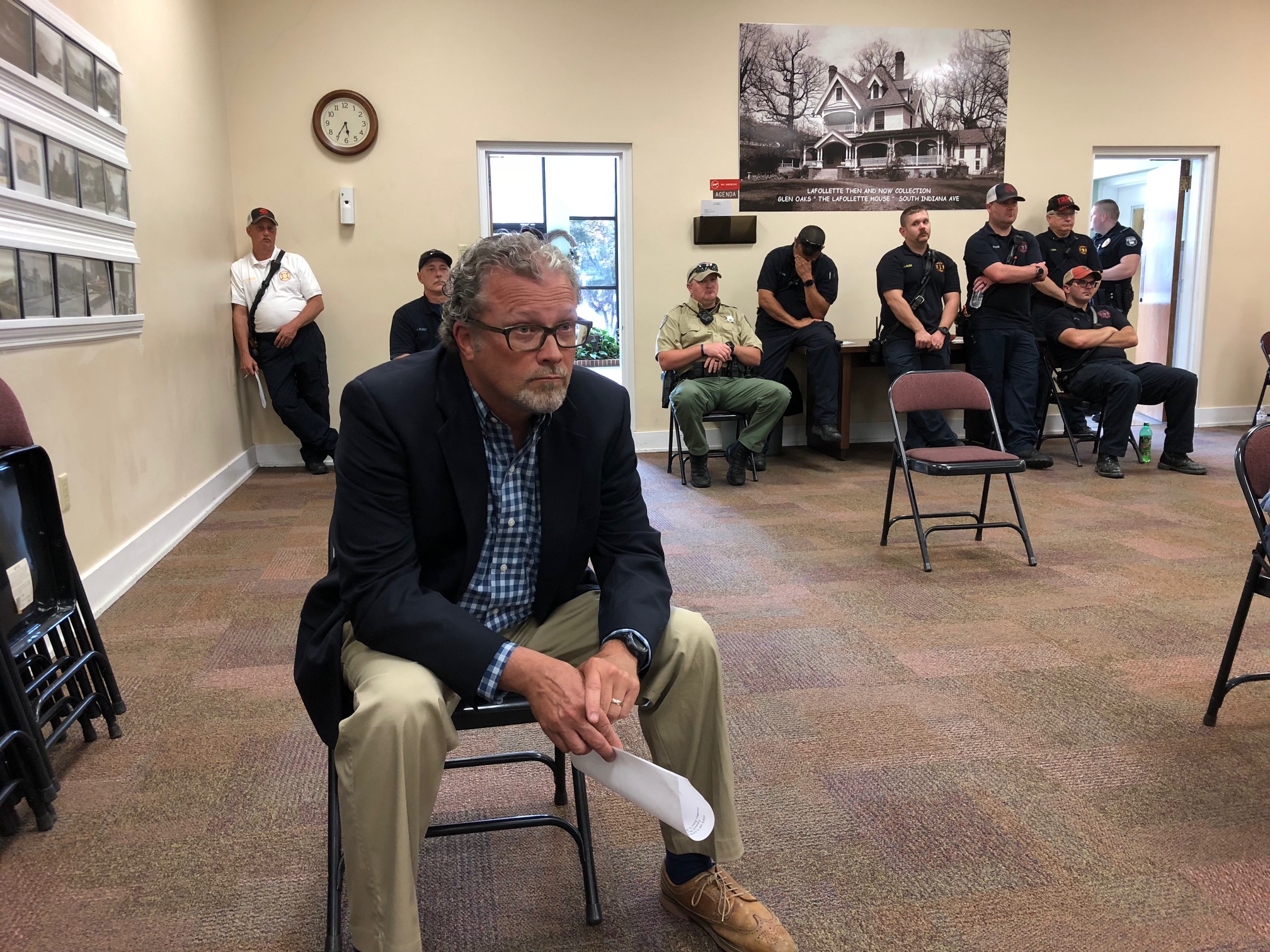 John Snodderly is the newest board member for the La Follette Utilities Board.

John Snodderly was appointed as a member of the LaFollette Utility Board. Utilities Director Kenny Baird gave council information about the Cares Act Federal Economic Development Administration for the LaFollette Utilities-Infrastructure Caryville back feed station with a 80/20 match. The grant is approximately $3 million, and the utilities department would be responsible for $600,000.  All work on the project would be done in house by the utilities department.

In the final business of the night, council agreed to post the position of Public Works Director in house with a deadline of all resumes submitted by June 16 at 4:30 pm. Public Works Director Jim Mullens retirement was announced at last weeks workshop.  (WLAF NEWS PUBLISHED – 06/03/2020-6AM)