TOP PHOTO:  It was classic Bobby Heatherly as he prepped to hit the first tee shot at the inaugural Bobby Heatherly Open Golf Tournament on Sat., May 18, 2019, at the La Follette Country Club. “It’s 10:35.  Let’s get this going.  Allison (his daughter), get that Titleist (golf ball) off the desk. This may be the last time you see this swing. That ain’t bad (after his shot). I’ve got to have that ball.”

LAFOLLETTE, TN (WLAF) – A tradition began last May at the La Follette Country Club, the Bobby Heatherly Classic.  The classic is named in honor of Bobby Heatherly, the man who invested 36-years on the hill that’s home to the beautiful nine-hole course.  “This tournament is always going to be our first tourney of the year,” said the general manager of the La Follette Country Club, Josh Vann.  “All the years he worked here and all the hours and self sacrifice he made, this is the least we can do,” added Vann. 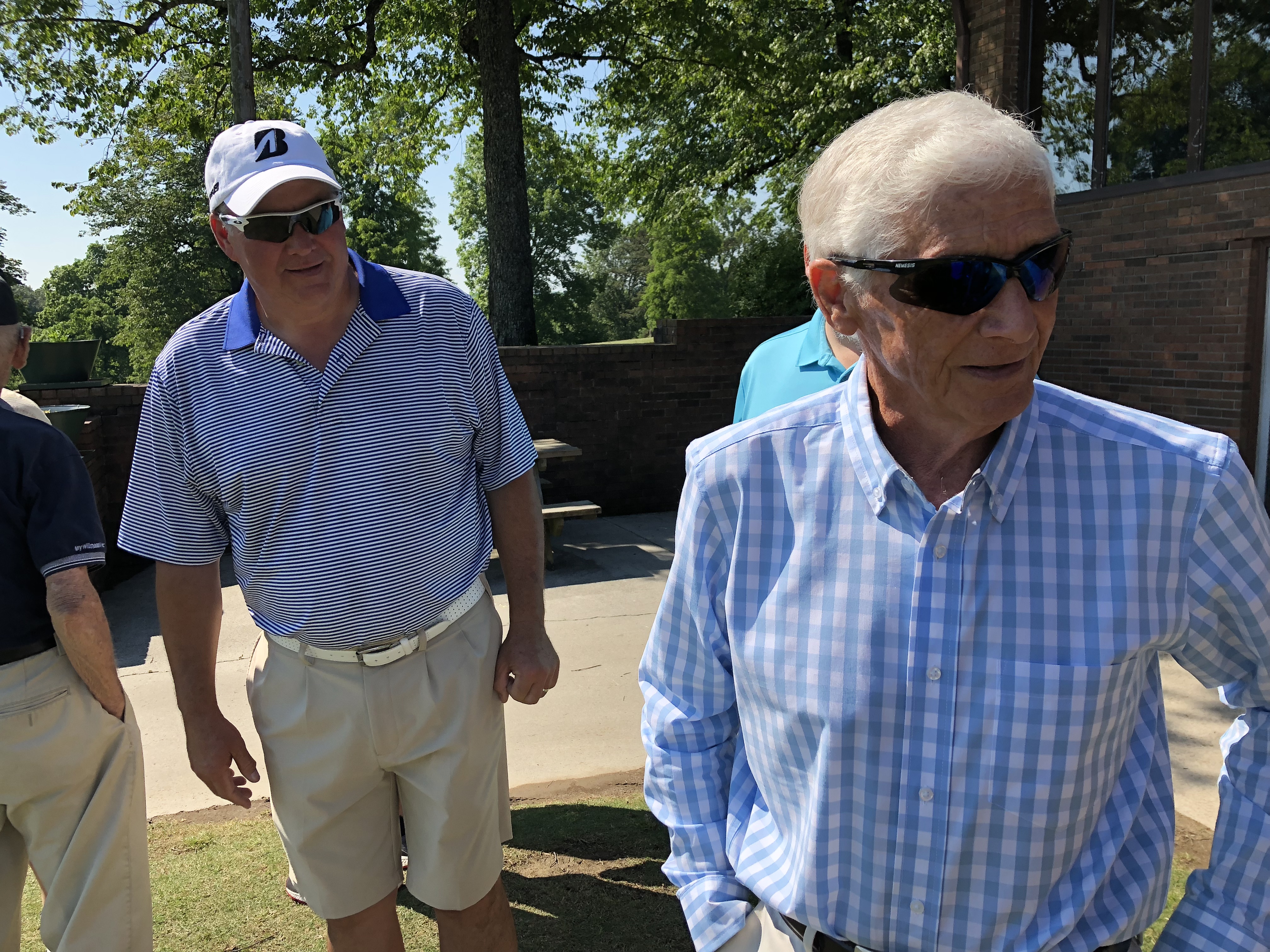 Bobby Vann, Country Club Board chairman (left), and the man the Bobby Heatherly Classic is named after on the right are shown a few minutes before the 2019 classic.  They’re waiting for a ball so Heatherly can tee off.

The two-person scramble tees off Saturday at 8 am, and there’s still room and time for a team to enter.  The entry fee is $200 per team, and all that is needed  is to call the pro shop at 423.562.9130.  Forty-eight players have entered the classic so far.

Last year, 18 teams with a total of 36 players played on the classic’s inaugural day on Saturday, May 18, 2019.  The age range of the entrants in 2019 spanned from then 18-year old Katie Wells to Bud Petitt who was a few months away from his 98th birthday.

Though Heatherly hit the first tee shot to open the Bobby Heatherly Classic, he won’t be opening this second classic.  He will, however, be greeting all the players at the first tee, watching a lot of the tournament and riding with some of the teams.  A new tradition begins this weekend when Heatherly will be on hand as the classic winds down on Sunday to congratulate the winners.  (WLAF NEWS PUBLISHED – 05/28/2020-6AM)

course loving it, nurturing it and growing it

A golf pro career that spanned portions of five decades beginning in the 1960s, had a passion for perfection and that forever changed the La Follette Country Club deserved recognition.  “They didn’t have to do this.  Even after I’m gone, there’ll be people playing in this tournament,” said Heatherly.

During Heatherly’s 36 years on the hill, sweeping changes took place.  Membership maxed out going from 15 members in 1969 to 210 creating a waiting list to join and leaving no room for anyone to pay a green fee and play.  The clubhouse was totally remodeled, the pool was built and a new watering system made the difference taking the club from bluegrass fairways to Bermuda fairways.  Heatherly added that each year, one green was completely re-done.

Eighteen teams with a total of 36 players played on Saturday.  WSaturday’s tournament mirrored Heatherly’s years and years of effort as the age range of the entrants spanned from 18-year old Katie Wells to Bud Petit who turns 98 later this year. Josh Vann said, “This is a testament to his work ethic with the generations of playing the course plus in this tourney.”

Petit said, “It’s unbelievable how he worked and what he did here.”  Bobby Vann, Country Club Board Chairman recalled what Bobby used to always say, “I’ve have two kids at home and 10 kids (greens) at work.”  Vann hands it to the board for the idea of a tournament to honor Heatherly.

Eighteen teams with a total of 36 players played on Saturday.  Wells and Petit were among the field that also included Wayne Kitts, Bob Fannon, Country Heatherly and many more.  There was a three-way tie for first place with the teams of Wells and Bobby Vann, Butch Hatfield and George Ellison, Scott Bowman and Daniel Forrester finishing at 10 under par for the two day tournament.

Heatherly points to all the kids that came through taking golf lessons from him; three generations of families.  Many of them went on to college and came back as members.  “We had a very good junior golf program,” Heatherly said.

He touched on the golf explosion from the mid-1970s into the ‘80s.  Heatherly added, “After work, coming to the golf course was the thing to do.”

What was not mentioned over the weekend was Heatherly’s hobby during his days as club pro; officiating basketball games.  He began in the 1960s with local youth games and went on to high school and then on to officiate big time college basketball at the Division I level.

“They (members and board) were good to me.  And I could not have done it without the support of my family,” Heatherly said.  Daughter Allison said that she and her brother Robbie grew up at the club, were there all the time, because that’s the place they could see their dad.