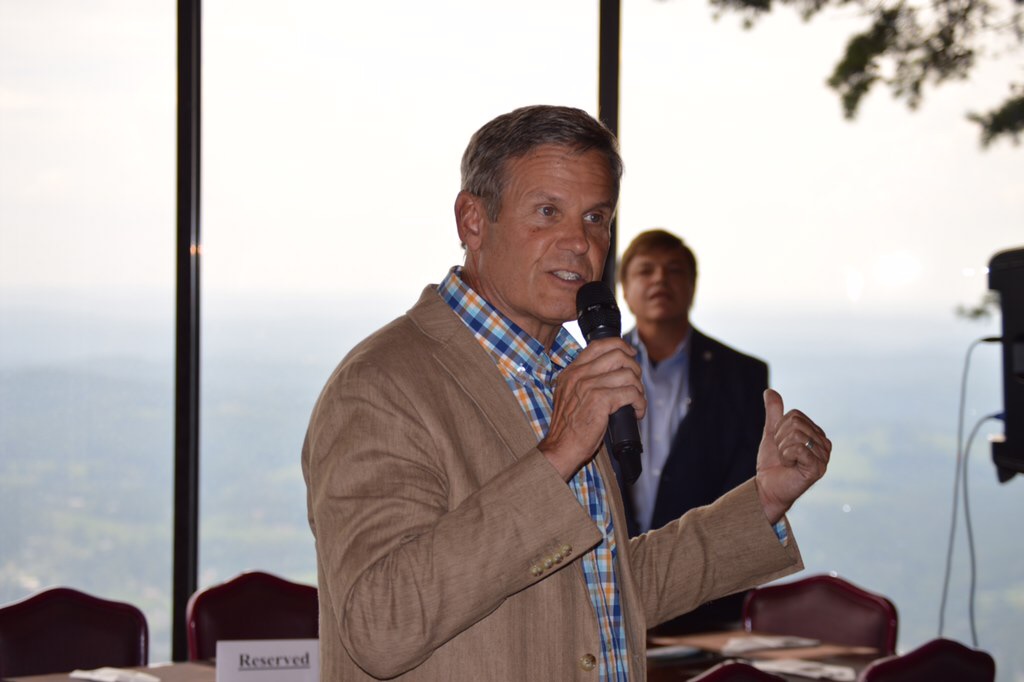 State Representative Dennis Power said, “I appreciate Governor Lee keeping the Legislature informed each week of the COVID-19 pandemic and how it is affecting Tennesseans.  I also want to thank those front-line medical workers, the first responders and all those that have to put their health and life on the line each day for our safety.  We live in the greatest state in the greatest country on earth and it is an honor to serve as your state representative.  This photo of Governor Bill Lee, with the microphone, and Representative Dennis Powers was snapped last July at McCloud Mountain in La Follette.

NASHVILLE, TN (WLAF) – The Governor thanked the Legislators this morning for communicating to his office and keeping him and his staff abreast of what is going on in our districts.  Governor Lee’s comments came at his weekly legislative conference call.

State Representative Dennis Powers relays that the governor said, “There will be changes over the next 30 days on when things will be opening and how they will be opened. Salons and barbershops will be opened a week from today (next Wednesday, May 6, 2020).”  The guidelines for those will be issued soon.

Dr. Lisa Piercy, the Commissioner of Health, said, “The state has tested over 162,000 for COVID-19 in the month of April which is about 2% of the population, and that is the goal each month from the CDC.”  Powers points out that Piercy talked about antibody testing and how we are beginning that process soon.

Powers said, “Major General Jeff Holmes, Deputy Adjutant General, Tennessee National Guard, spoke about testing and how they had already tested 42,000 since they began testing, and that they are testing this weekend all over the state.”  Holmes went on to say they are trying to determine where there are spikes in testing and use their resources there.

Governor Bill Lee has been on phone calls with other governors and the White House and wants to do the things that keep our people safe. Lee calls this the number one priority.  Powers noted that the governor said, “We were one of the first five states in the country to start testing and that we test more than any of the other eight states that surround us, and stated that we need to increase testing in the rural areas and make people aware of those testing sites.”  That’s one of the keys in preventing further outbreaks.

Also during the Governor’s legislative call, Commissioner Jeff McCord, Commissioner for the Tennessee Department of Labor and Workforce Development, said, “Tennessee has paid 280,000 unemployment claims this week compared to the 2,000 per week when this started, and we’ve upgraded our system twice, and the latest update has helped the most.  We are working the claims as fast as we can.”

Powers said, “The Governor closed by saying he was very pleased with results of reducing the spread of the virus across the state, and that our doctors, epidemiologists, nurses, the Tennessee Hospital Association have all come together to help produce these results.  I want to open businesses safely as soon as possible.”  The Governor noted, “As we open up our economy slowly and safely with the restrictions and guidelines, I want the Legislators to partner with businesses and to keep the public aware of testing and the guidelines.”  Working with the nursing homes to get all their staffs tested is another key the governor pointed out.  Lee said, “They are working with the most vulnerable population, and we all need to “do our part to stay apart.”