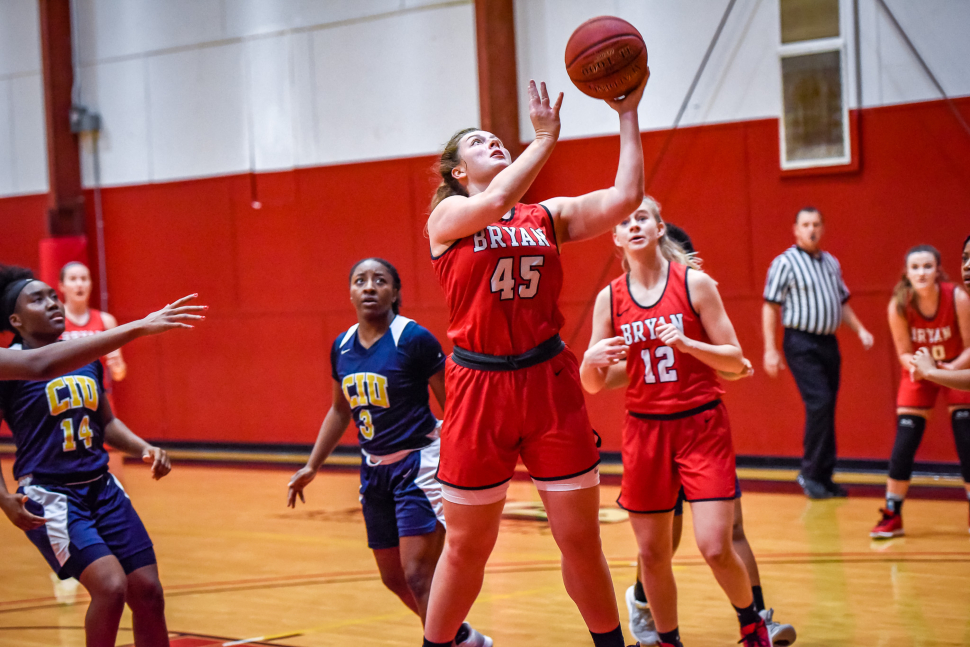 DAYTON, TN (WLAF) – The scored was deadlocked 35-35 at the half in Tuesday night’s Appalachian Athletic Conference rivalry game between the Bryan Lions women’s basketball team and the visiting Tennessee Wesleyan University Bulldogs, but an overwhelming third quarter followed by another commanding fourth quarter was all the Lions needed to pound the Bulldogs 79-54. With the win, Bryan improves their overall record to 9-0 and AAC record to 6-0 while lowering Tennessee Wesleyan to 3-5 overall and an even 3-3 in conference play.

Leading Bryan to victory was the trio of Deandra Luna, former Campbell Lady Cougar Sarah Cain, and Destiny Kassner who all ended in double-figures in scoring. Luna and Cain matched each other with 16 points apiece, followed by Kassner’s 11 points. Also helping in the scoring column were Shayla Ludy with nine points, Karli Combs with seven points, and all four of Kaitlynn Hennessee, Tristan McClellan, Amadea Pankey, and Myah Parlier with four points apiece. Bryan’s rebounding leaders were Hennessee and Cain with five each, followed by Luna’s four. Luna and Cain tied with a team-high four assists, respectively, while Hennessee chipped in three. Hennessee led the Lions on defense with team-bests six steals and two blocks. Ludy also played a key role in Bryan’s 13 total steals with four of her own.

Bryan shot just over 50 percent in the game, and helping with the efficiency was Kassner going a perfect 5-of-5 and Cain knocking down 4-of-6. Cain also made 1-of-2 from the perimeter and was 7-of-8 at the foul line. The Lions were outrebounded by the Bulldogs 32-30, but Bryan made up for it with just 11 turnovers compared to the 19 they forced.

It took two minutes before Tennessee Wesleyan broke the silence with a trey for the first points of the game. Cain hit a free throw, and Combs delivered a deep triple to take control of the lead 4-3. The back-and-forth struggle for the lead continued through the opening frame with a total of five lead changes and two ties. The two ties were at 11-11 and 15-15. Parlier scored in the paint to put Bryan on top 17-15, but a last-second three-pointer dropped in by Tennessee Wesleyan gave the Bulldogs an 18-17 edge entering the second quarter. The brief moment where the lead turned into a four-point margin for the Lions in the second quarter was close to the midway point at 24-20, but the score was evened up at 26’s, 28’s, and lastly 35’s when Luna assisted Cain with a buzzer-beater three-pointer to tie the game 35-35 entering the break.

The third quarter is often where Bryan shines, and that was no different when the Lions clawed past the Bulldogs 12-2 through the first six minutes of play to establish a double-digit lead at 47-37. The 10-point separation followed them into the final quarter when McClellan capitalized on a drive through the lane and hit the layup to make it a 51-41 Bryan lead. Ludy sailed in a three-pointer to open up the scoring in the final period. Tennessee Wesleyan was able to trim the margin to eight points with 7:45 remaining, 56-48, but then a trey by Luna helped spark a run that left the Bulldogs behind for good. Bryan kept Tennessee Wesleyan scoreless for the next six minutes in reaching a 24-point advantage, 72-48, with only two minutes to go. A three-pointer buried by Tori Burnett with 22 seconds left gave Bryan their largest lead of the game, 78-52, as the Lions finished off the Bulldogs 79-54.

Bryan will return from Thanksgiving Break with a December consisting of primarily road games. A four-game stretch on the road begins next Wednesday, Dec. 4 at 6:30pm in Gainesville, Ga. at conference challenger Brenau University. The Golden Tigers are currently 5-4 overall and 2-3 in the AAC. (WLAF NEWS PUBLISHED – 11/27/2019-5PM)