TOP PHOTO:  Dennis Powers (L), Gary Gray (C) and Jerry Dagley (R) look over Powers annual from 1968.  Gray explains that he was not the varsity when the team photo was taken for the annual, but that Coach Ron Murray brought him on to play on the varsity after the season started. LAFOLLETTE, TN (WLAF) – What was expected to be a short ceremony to honor former La Follette High School Ron Murray on Friday morning at WLAF turned into a nearly two-hour reunion of sharing stories and recalling memories. 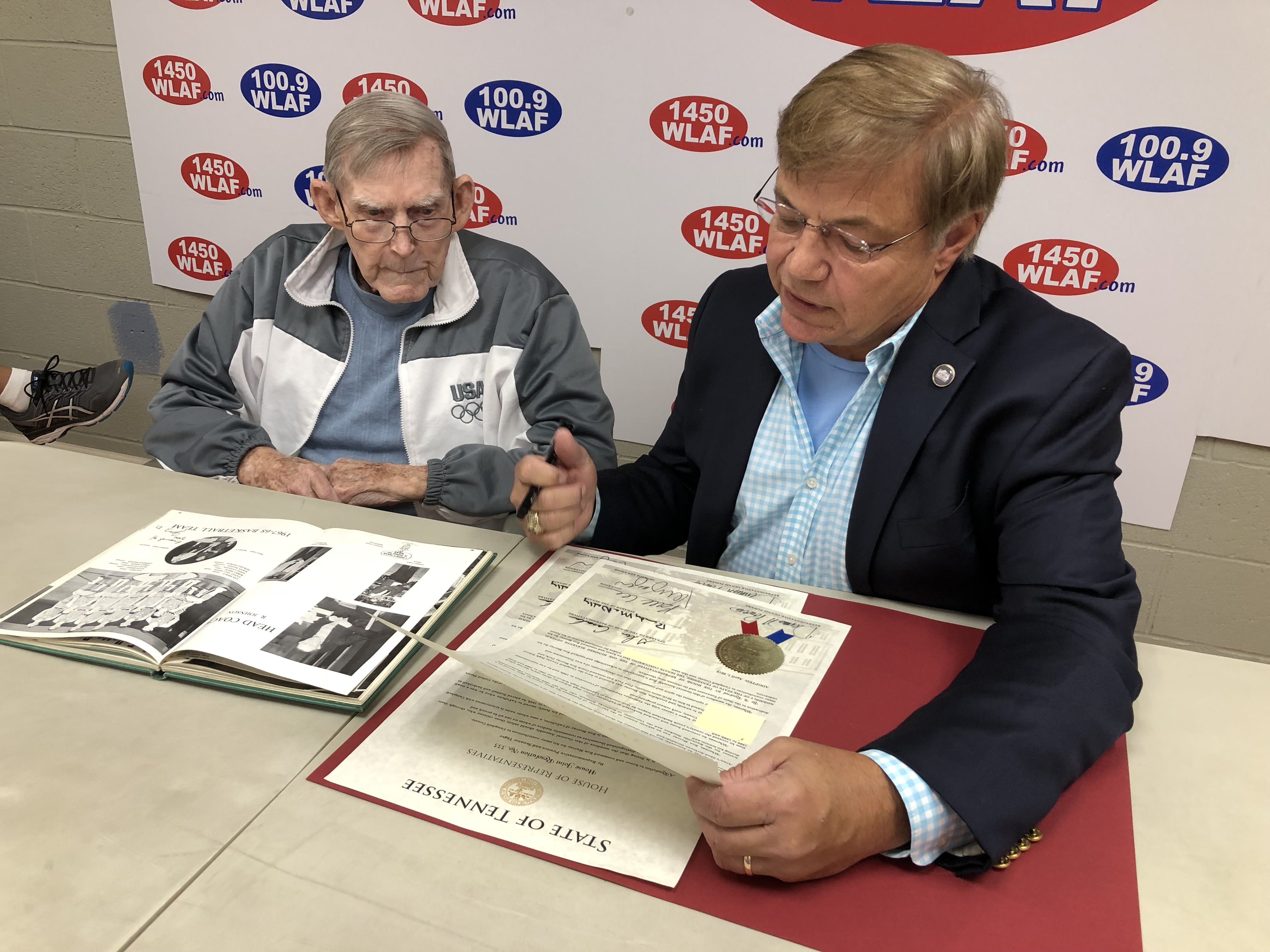 Ron Murray played for the legendary John R.W. Brown at the old La Follette High School in downtown La Follette in the 1940s.  In fact, Murray, who went on to his own great coaching career leading the basketball Owls, played on Brown’s very first team. Friday morning, with some of Murray’s former players in attendance at the WLAF studios, State Representative Dennis Powers presented the old coach with a House Joint Resolution prepared for Coach Ron Murray. 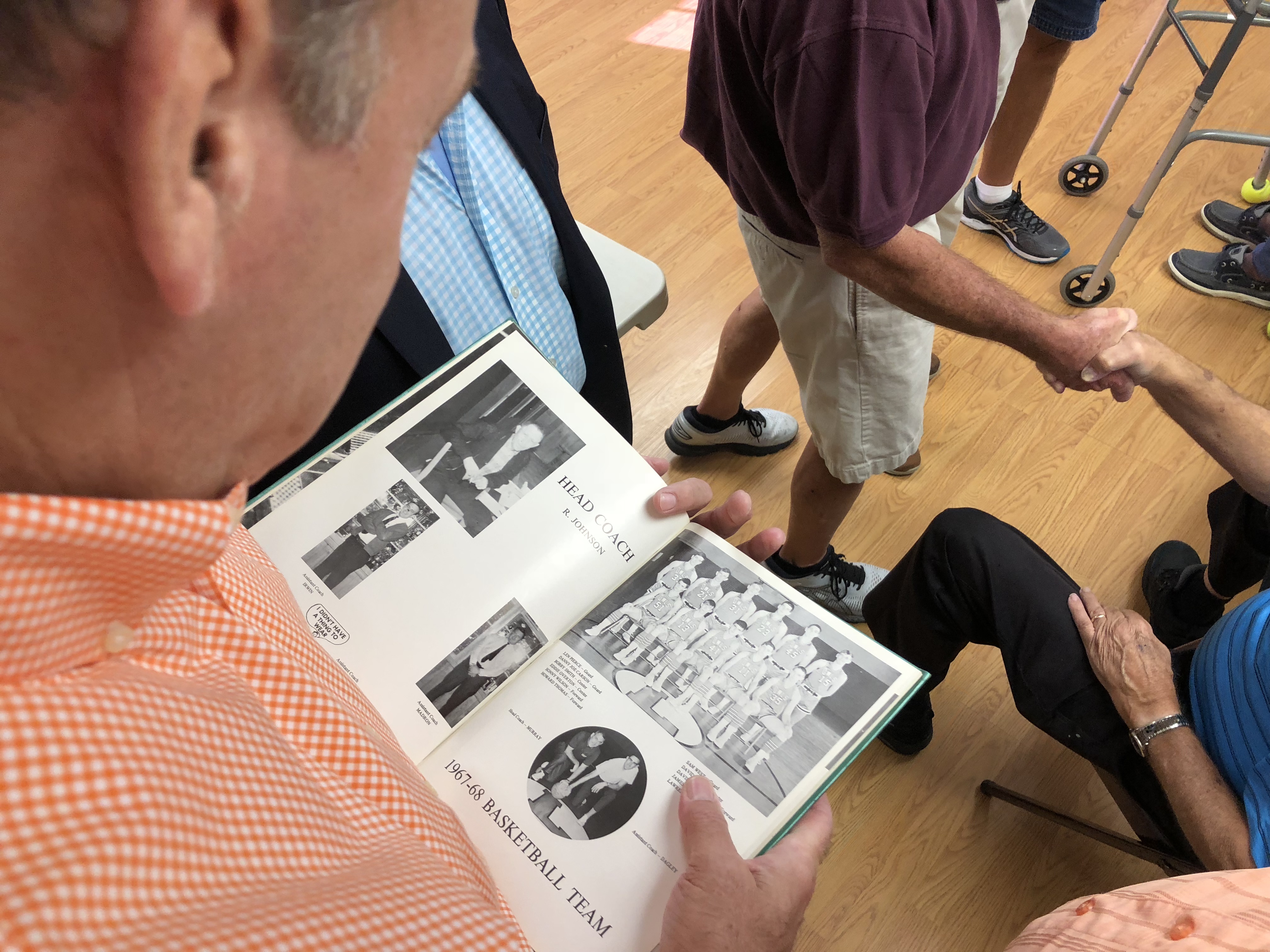 Gary Gray above wore his orange while below Joe Snodderly, one of Murray’s first stars, poses for a photo with Murray. One of Murray’s greatest wins was at the region tournament in the early 1960s at the old University of Tennessee Alumni Gym.  It was a win over the Knoxville South High Rockets led by the leading scorer in the state in Jay Cole.  Bill Young, who later became the coach of the La Follette Owls Football, Basketball and Baseball teams, also starred on that South team.That win over South was the topic of a story or two. Len Pierce (R) and Joe Snodderly (L) share a story as Jim Pierce (green shirt) looks on.  Coach Jim Pierce served as the last head basketball coach of the La Follette Owls and closed out the last season with an impressive winning team.  From bottom to top:  Ron Murray, Bobby Heatherly, Jerry Dagley, Johnny Byrge, Gary Gray and Dennis Powers.  Jerry Dagley was the head coach of the La Follette Owls during two different stints and succeeded Murray as head coach in the late 1960s.  Dagley had seasons of more than 20 wins and advanced deep into the regional tournament one season, which was quite a feat in those days. Kelly, Murray’s son, had one of the funniest stories of the morning.  He told of the time he started playing organized basketball, and his dad told him to always do what the coach said.  The younger Murray became quite confused when his coach was coaching him from the bench and his father was coaching him from the stands.  Kelly finally gave up and asked his coach what he was supposed to do, and his coach said, “Listen to your dad.” 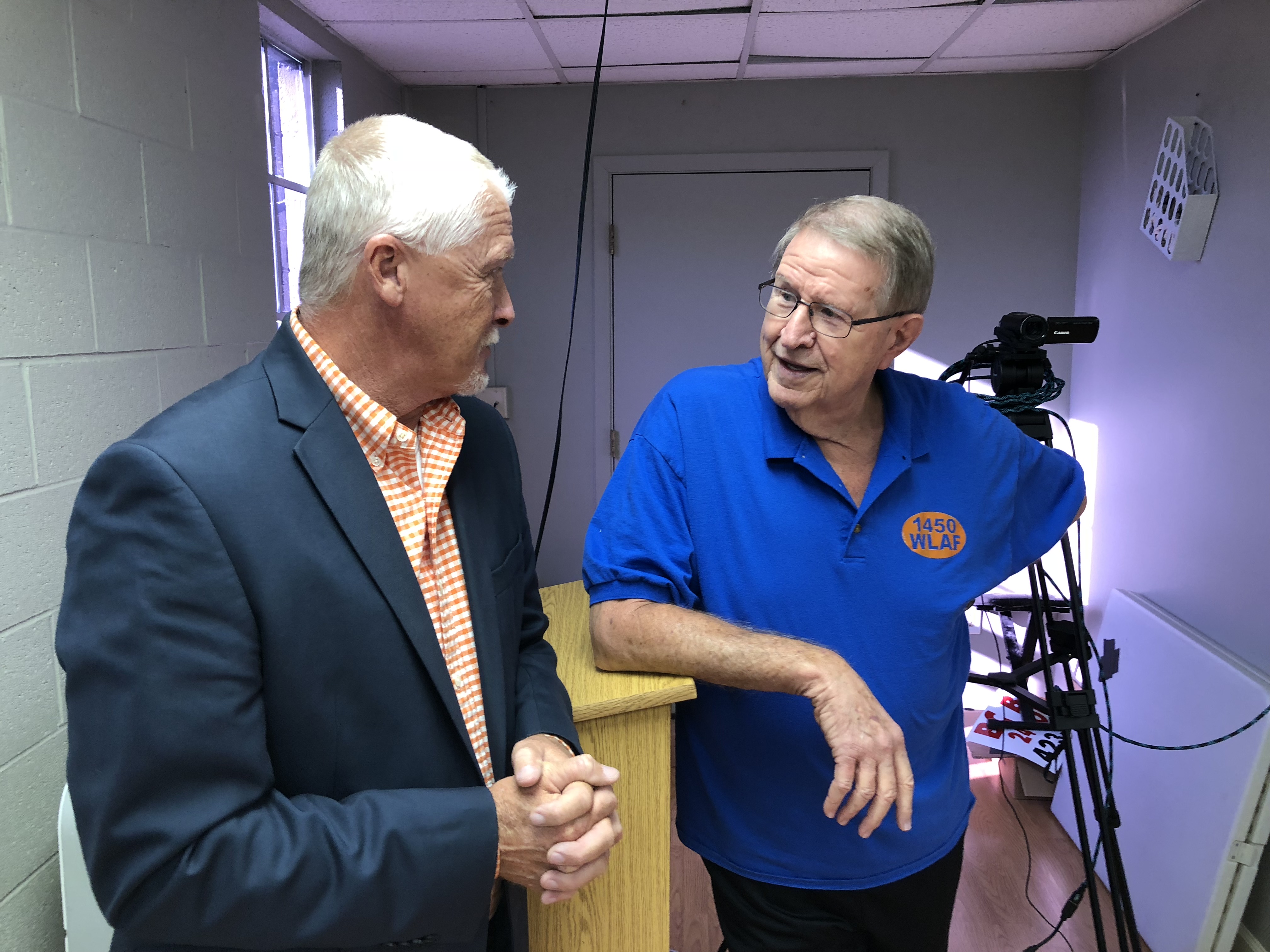