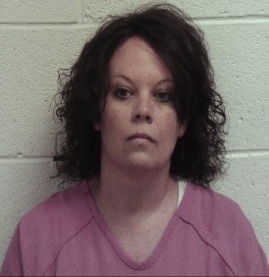 JACKSBORO, TN (WLAF) – In a release from the Campbell County Sheriff’s Office:

On September 12, 2019, deputies were called to the Duff Community of Campbell County, in the area of High Knob Road, in reference to an unresponsive female lying in the middle of a roadway with a handgun.    When deputies arrived they met with bystanders who had retrieved the firearm from the female. Deputies made contact with the female who was identified as Krissy Lynn Cobb (photo above), still lying in the gravel roadway and was found to be intoxicated. Mrs. Cobb stated to the deputies that her husband had forced her to smoke something, drink something, and that he had also assaulted her. Mrs. Cobb stated that he also was operating an ATV, armed with a handgun and was currently looking for her. Mrs. Cobb was transported to the Jellico Hospital, where investigators questioned her about the alleged assault.

At the hospital, while talking with investigators, Mrs. Cobb again stated multiple times that her husband assaulted her by striking her in the head, forced her to drink something, made her smoke an unknown substance, and held a gun to her head during the attack. Mrs. Cobb stated to investigators that she went to the rural area of the Duff Community prior to the attack to walk for health reasons and that she was in possession of a firearm. Mrs. Cobb was unable to give details of the assault to deputies or investigators, and would only state that her husband had committed the assault.

Investigators spoke with Mrs. Cobb’s husband who was cooperative and gave a statement. Mr. Cobb denied the incident and also provided a witness that corroborated his statement about his whereabouts during the time of the incident. A follow up interview with Mrs. Cobb was conducted after her release from the hospital. During the interview Ms. Cobb stated to investigators, that it wasn’t her husband that had assaulted her. Mrs. Cobb gave multiple false statements to investigators and deputies during this investigation. During this investigation and after other interviews were conducted, it was found that the alleged assault could not have feasibly occurred. Mrs. Cobb also stated in her interview that she had consumed two alcoholic beverages on her walk the night of the alleged assault. Investigators processed Mrs. Cobb’s vehicle for evidence and recovered what is believed to be remnants of a schedule VI controlled substance.  Krissy Lynn Cobb surrendered herself to Campbell County Sheriff’s Deputies at 2:30 PM on October 2nd 2019.

Mrs. Cobb is currently charged with; possession of a handgun while under the influence, public intoxication, filing a false police report, and littering. She was booked into the Campbell County Jail and released on $5,000.00 bond.  (WLAF NEWS PUBLISHED – 10/02/2019-3PM)