Fox Den Lane near High Knob is where a home caught fire around 2:30 pm on Wednesday.  Units from the Campbell County Rural Fire Service responded in 25-degree weather.  Firefighters from the La Follette and Caryville Fire Departments were called in to assist.TOP PHOTO:  Firefighters battled the home fire and worked to contain the smoke house fire, behind the home, from getting off the property.

No one was at home at the time of the fire as neighbors heard a popping noise, soon saw smoke and called 911.  There were no injuries, but it is believed a cat and dog died in the fire.  One neighbor said that a smoke house behind the home burned to the ground. 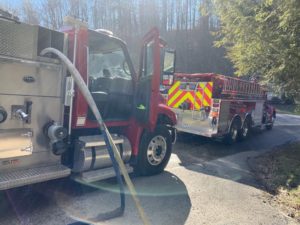 CCRFS Assistant Chief Daniel Lawson explains that when crews arrived, they found heavy fire from the back of the house.  He adds that the extreme cold temps caused extra safety issues with the formation of ice from the water and cold stress for the responders. 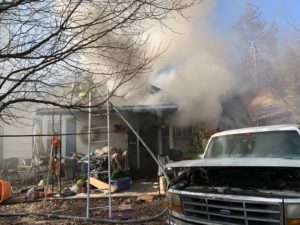 Heavy smoke pours out of the home on Fox Den Lane