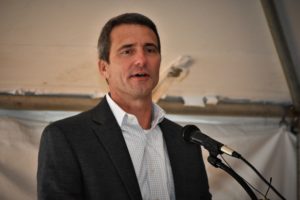 Stiner event emcee  US Army retired Logan Hickman detailed that the elder Stiner retired to his native Campbell County after a distinguished career in the US Army.  Within a few months of returning home, he transitioned to his next career as county executive (later known as county mayor) of Campbell County from 1992 until 2002.  Before he left office, he began a 15 year stint as local businessman Lansden Hill of Pyro Shows flying partner.  It was through his time as a pilot in the military and privately out of the Campbell County Airport, along with his love and service to his community, that served as the logical foundation for his name being placed above the hanger at the local airport.

Speaking at Monday’s ceremony, Campbell County Mayor E.L.Morton said, “Tom has a long and storied history as a valley boy, mischievous and hard working on the farm.”  He added that he served with joy at home and in the military.

Lieutenant Colonel Melvin Clawson, a Campbell County native, said he never quite got over his very first plane ride.  The man who piloted a young Melvin and his mother in the early 1970s lifting off from now Stiner Airfield was none other than Tom Stiner.  The rest is history as Clawson is a career military man and describes Stiner as his mentor and confidant. 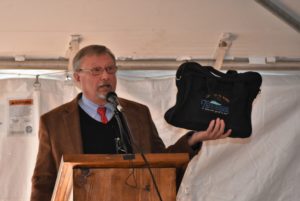 Lansden Hill holds a prized possession; Tom’s travel bag given to him by Tom’s wife, Judy

Mark Stiner said, “The Stiner family appreciates it all and is impressed and humbled by today’s ceremony.”  He summed it up by saying “Tom would forever be proud to have his name associated with the airport.”  (WLAF NEWS PUBLISHED – 01/22/2019-6AM-CHARLIE HUTSON PHOTOS)