After a cloudy and cool start, Saturday’s weather ended up being almost festival perfect with low numbers for people and temps early in the day as it all changed by the afternoon.  Sherman Campbell at Smith’s Hardware said he had a run on gloves, toboggans and ski masks early Saturday morning. 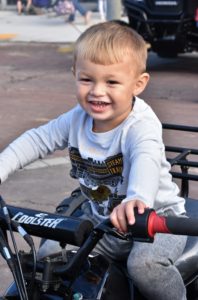 The Big Creek Fall ATV Festival hosted visitors from 17 states including Texas and New York. LaFollette City Administrator Jimmy Jeffries, the festival founder, estimated that there were approximately just under 8,000 people in attendance. “This was the fourth year for the festival and the biggest year yet for the festival,” Jeffries said. The festival promotes a good family atmosphere with live music, food and trail rides. 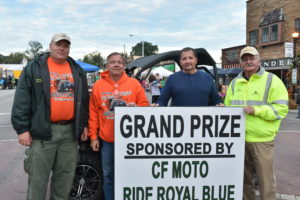 Vendors began arriving around 7am Saturday morning and stayed until 7:30 pm.  In all, there were 90 spaces filled. Most riders spent the day enjoying the trail, visiting vendors and finished the evening with entertainment. 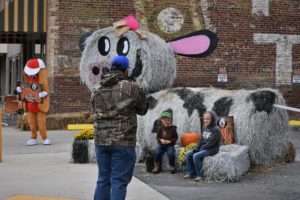 The most photographed spot was “Queenie the Cow” at the Royal Lunch Room as Zack Lloyd snaps a photo of his kids,  Titus and Lily.

“We would like to thank all of the sponsors of the event, the hard work of city employees and committee members along with Pyro Shows and Dixie Roofing.  Without them this would not be possible,” said Jeffries.