More than 26,000 clays.  Sixty-six teams.  Countless volunteers.  And it all came together from predawn to near dusk last Friday near Maryville. 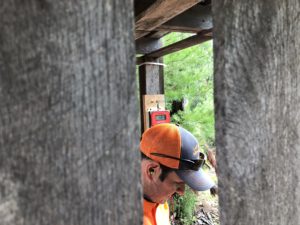 Billy Ball, one of 264 shooters, reloads at Friday’s “Clay Day”

“The children’s center is dear to my heart, and there is no better organization,” said Billy Ball.  Ball, who participated Friday, also serves on the board of directors for the Campbell County’s Children’s Center.  Though he says “Clay Day” is a good way to spend time with friends, there is nothing better than we can do for our children than support the center.  Ball adds, “We are blessed to have the children’s center; a great asset with a great staff.” 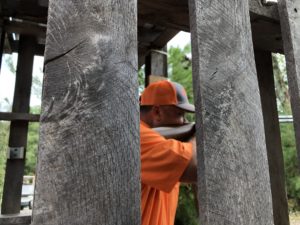 The tourney is the brainchild of 8th Judicial District Attorney General Jared Effler who described the day as “awesome!”  He smiled as he said that this was by far the biggest yet with three full flights comprised of 22 teams per flight.  Effler said, “I’m humbled by the outpouring of  community support and hope we can keep it (Clay Day) growing.”   MORE photos are HERE. 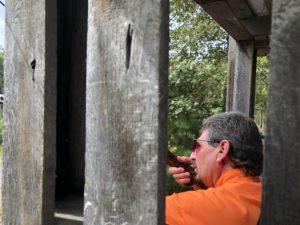 Cray Vinsant led off at Station 3 on Friday afternoon

Volunteers spent a rainy Thursday setting up for Friday’s shoot.  They were back long before sun up on Friday to get the day rolling.  Outside from staffers from Effler’s district offices, other volunteers included students from Union County High School who helped prepare the meals.  Both breakfast and lunch were served.  Members of the LMU Softball team helped with the third, and last, flight of the day.  Music was a new addition this year as Tennessee 90 entertained during lunch.

Tony Parkerson with Stowers participates in about 20 clays tournaments a year and describes this event “far and away the best of all of them- first class and so well organized.”  Parkerson points to Billy Ball’s call of the auction and the auction itself as a blast with some really nice auction items.