It was a busy day at the City of La Follette Regional Planning Commission meeting on Thursday.  Bob Fannon, of Riggs Drug, had a consultation with the planning commission discussing property he is hoping to buy from Bill Cox (originally the Lyons Super Trading Center) and the construction he is preparing to do. 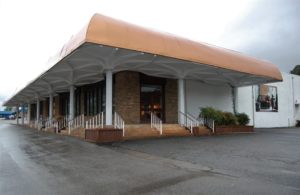 This building was most recently  the home of Badcock Furniture

The property is located on West Central Avenue at the corner of South 13th Street (Stop Light 5) and will contain a commercial building. The problem Fannon is facing, and the biggest concern, according to Codes Officer Daniel Smith, is parking spaces once the building is constructed.  City codes require there must be a certain number of parking spaces per square foot of retail space.  To comply with city codes, Fannon requested a variance to reduce the size of parking spaces. An average parking space is 10 feet x 20 feet, and Fannon would like a variance to make his 9 feet x 19 feet. The variance was approved by the Board of Zoning Appeals.  Fannon assured the board that with this variance approval and the volume of retail space he plans, the parking spaces would be well within city standards.  There is more to come on Fannon’s plans in the next couple of months. 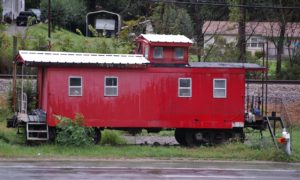 Next on the agenda was a variance request by Johnny and Sue Letner.  The Letners ran the West End Auto Sales at the iconic red caboose.  CSX had informed them to vacate the premises due to a recent land survey.  They would like to move the car lot to a property on West Avenue in LaFollette.  That’s across from West La Follette Baptist Church.  City of La Follette Mike Stanfield had already received calls about the property and people not wanting a car lot in that area.  The variance was denied and the Letners were told they could appeal to the La Follette City Council. (WLAF NEWS PUBLISHED – 09/28/2018-6AM-PHOTOS BY WLAF’S LINDSEY HUTSON)