Concerns were raised at last night’s City of LaFollette Council meeting by Ralph Sharp.  He came to council claiming there had been a house lying in the street for four months on West Walden Street.   WATCH the meeting here. 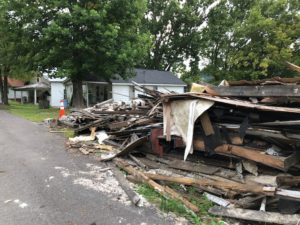 This debris is at 517 West Walden Street.

Mayor Mike Stanfield disputed this allegation by saying it was not in the street and it hadn’t been that long.  Sharp then alleged that a house on the same street that had a methamphetamine lab blow up inside of it was contaminated by the methamphetamine. Sharp further alleged that the components from the lab had been thrown over the bank near North 19th Street. City Administrator Jimmy Jeffries responded that Sharp came to the city about two years ago with the concern of the house being contaminated with methamphetamine. At this time the city contacted the EPA and Solid Waste Management to assist with the issue. They tested material from the home, and it did not test positive for methamphetamine.  Stanfield questioned Codes Enforcement Officer Daniel Smith about the clean-up progress on the torn down house on West Walden.  Smith said the property owner is working on it, and it should be completed soon.

Ordinance 2018-06 amending the City of LaFollette code regarding fireworks had its final reading and was approved. The amendment will allow for the sale of fireworks inside the city with some restrictions. A fee of $1,000 will be assessed for permanent structures and renewed on a yearly basis for $500. Temporary structures will have a yearly fee of $500. Resolution 2018-20 authorizing the City of LaFollette to participate in the TML Risk Management Pool Drivers Safety Matching Grant.  This was approved and is done a yearly basis. Resolution 2018-21 amending the original 2018-19 budget for additional paving on Towe String Road (railroad crossing) in the amount of $27,000 was also approved by the council.

The police department now has a different officer, Matthew Sandifer, on patrol in the LaFollette Housing Authority. A new contract for the officer between the LaFollette Housing Authority and the City was approved. The new contract includes an additional $500, bringing the total to $46,318.85. The police department will be receiving eight new tactical vests from Independent Armor, Inc. per the bid of $12,800.

Karen Cumorich with the Campbell Culture Coalition asked the council about the bid for lead abatement at the old post office. Smith said they had received only one bid from Stan’s Construction in the amount of $23,890.  After some discussion, Vice Mayor Joe Bolinger made the motion to accept the bid with a second by Bill Archer.  Ann Thompson voted no saying she felt that it could be done in-house.  Lonnie Wilson voted yes, saying he wanted it done. Sharp interjected from the audience saying the city had no business buying that building. Cumorich told Sharp they had received $100,000 in grants to help with the restoration. He continued by saying “you’re not doing anything with it but hanging pictures in it.”

In the final business of the night, council approved resolution 2018-22. The resolution allows council to apply for TAP (Transportation Alternatives Program) grants. The grants will assist in funding the sidewalk projects in the city.  The next phase will be the sidewalks on Indiana Avenue.  The city has previously completed sidewalks from the end of the walking trail to Tank Springs on the south side.  (WLAF NEWS PUBLISHED – 09/05/2018-6AM)