Tuesday was without question a big day for the residents of the Stinking Creek Community and the many who travel Stinking Creek Road (SCR).  That’s when it was announced that the road, ravaged with pot holes and rough spots, will be resurfaced come spring.

But it was also a big day for the man charged with maintaining SCR and the other hundreds of miles of Campbell County roads, Ron Dilbeck.  He said, “It’s been a great overcoming for Campbell County, because this is something that’s been needed for years, and the amount of revenue the road department receives every year for hot mix asphalt doesn’t allow us to do what we wanna do.”

More than two years ago, Dilbeck took his request for a new Stinking Creek Road to Senator Ken Yager thinking he could get him onboard, and that Yager would get things rolling in Nashville.  And Yager did.  Dilbeck says that over the long process, Yager kept assuring him that this was in the works.

In the end, the dollars for the repaving are coming from the state via The Improve Act.  Dilbeck expressed his thankfulness for that act. 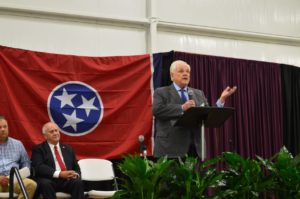 Yager (above) drew the largest applause and shouts of the morning when he said, “We’re going to pave Stinking Creek Road.”

“We send crews here (SCR) each week to try and patch pot holes,” said the first-term road superintendent.  That’s been an ongoing process for several years.  Dilbeck notes that SCR endures a lot more than most roads.  Stress from I-75 detours have not helped.

Needless to say, Tuesday’s news is going to make a tremendous difference for the road department.

Dilbeck thanked the audience at yesterday’s ceremony for their confidence in him in this effort and for their patience.