Campbell County’s 2018 General Election saw several close races as the night wore on.   CLICK HERE for all the final numbers – this link had been on the fritz and is now working.

In what was perhaps the two most watched races of the election, the incumbents went back into office. Sheriff Robbie Goins was elected to his third term in a 5,094 to 4,624 vote victory over challenger Jimmy Jeffries. 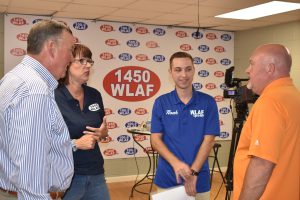 In the mayor’s office, incumbent EL Morton saw a narrow victory over Jack Lynch. It was a scene replayed from the 2014 election in which Morton won over Lynch by a slim margin. This year, Morton garnered 2,643 to Lynch’s 2,437. Aaron Evans came in with 1,736 votes followed by Brian Younce at 1,184, David G. Young with 1,162 and Mike Freeman rounded out the field at 531 votes.

County trustee Monty Bullock won his race over Tommy Overton in a 7,487 to 1,846 victory,

In a review of the voting totals, the winners of the night’s races all won their contests in early voting with the exception of two, Alene Baird lost in early voting to Todd Nance by 14 votes and Josh James, who went on to win a second district school board seat lost to incumbent Sharon Ridenour by four votes. In the end, James won over Ridenour in a 675 to 604 victory. (WLAF NEWS PUBLISHED – 08/03/2018-MIDNIGHT)