There were some questions Wednesday afternoon when a 2:30 pm call came in to E-911 Dispatch.  One official tells WLAF News that it was a third party call that reported a shooting at a home up the valley.  It was said that Mike Heatherly shot his wife Rosebud dead in their Chapman Crest Road home, and he then called a family member to tell what he did.  That family member in turn called E-911. 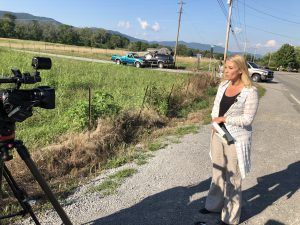 Leslie Earhart, a public information officer with the TBI, details that when a member of the THP, the Campbell County Sheriff’s Department, and the Drug Task Force arrived at the scene, they found the 64-year old husband coming off the front porch and into the yard waving a gun.  She goes on to say that Heatherly refused to comply with the officers’ requests, and he pointed his gun at the officers.  That’s when shots were fired.  Earhart explains that it is unclear if Heatherly fired his weapon, and that that is still under investigation. 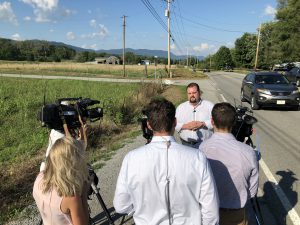 CCSD Chief Deputy Aaron Evans spoke for Sheriff Robbie Goins to the media this evening, because the TBI has Goins as a witness meaning he cannot comment.

One retired law enforcement veteran was soon to the scene describing it as hectic, and said that Heatherly was likely dead right after he was loaded onto the stretcher. A med chopper was enroute but was waved off.  Heatherly was pronounced dead on arrival at the La Follette Medical Center.

None of the officers in the standoff was injured at the house which is a stone’s throw from Judy’s Grocery.

Police were unaware that Heatherly’s 54-year old wife lay dead inside her brick home until after he was taken away by ambulance.

Earhart adds that the TBI Violent Crime Response Team remains on the scene this evening and likely will for several more hours.  A forensic scientist is part of this special team.

The officers involved in the shooting have been placed on administrative leave with pay, which is standard procedure. Attorney General Jared Effler requested that the TBI take over the investigation.

Campbell County Sheriff Robbie K. Goins is a witness to today’s incident. Therefore the TBI will not allow him to comment on the case or the investigation.  Chief Deputy Aaron Evans served as the spokesman for the sheriff.  (WLAF NEWS PUBLISHED – 07/25/2018-7:30PM)