Moist eyes and a few sniffles were mixed among the smiles and hugs of support for Jennifer Orick this morning at the Court House at Jacksboro. 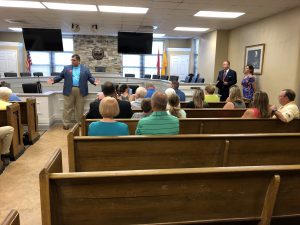 Campbell County Mayor E.L. Morton opened Orick’s swearing in ceremony with fitting words, “This is rising out of tragedy.”

Mike’s widow, Jennifer, was sworn in to finish his 4th District term until a person is voted-in in November to complete the final two-years of his tenure. 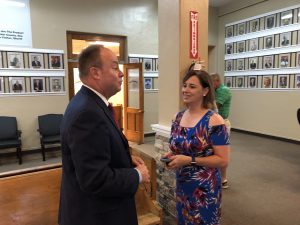 Judge Joe Ayers had the honor to swear in Orick who was his personal secretary when he was in private practice some 22-years ago as Jennifer reminded him by asking, “How old does that make you feel?”  Ayers called it an honor to conduct the ceremony and described Jennifer as a conscientious and hard working young woman.

Jennifer Orick told the healthy crowd of family and friends, “Nobody can fill Mike’s shoes (and if you know Mike, he had a lot of shoes as the audience chuckled).  This is Mike’s seat.  I’m gonna try to do what I can to  make him proud.”

One Reply to “‘This is Mike’s seat’ – Jennifer Orick”