The 10 and under Campbell County Dixie Youth League All-Star Baseball team lost a heartstopper in its run to a state championship.  The sports complex at Loretto, Tennessee, is the site of the AAA 2018 Dixie Youth Baseball state championship.  Loretto is in Lawrence County which is due south of Nashville on the Alabama state line.  Loretto is home of retired major league baseball player David Weathers.  Weathers won a World Series with the 1996 New York Yankees and grew up in Loretto.

The Cougars went 3 & 0 to take the District Championship at Spring City and then opened the state tourney with a 6-4 win over Decatur County and a 2-1 nail biter past Signal Mountain.  It’s a double-elimination tourney.

Saturday evening, after rain delays, the Cougars, coached by Kurt Owens, Brian St. John, Casey Lawson, and Daniel Lawson, took on Springfield.  The game that seemed destined to never end finally ended in a heartbreaking loss about 2:30 am Sunday morning Campbell County time.  Springfield clawed its way back after trailing 5 – 0 to take the 8 – 6 win.

Sunday evening, it was do or die for the Cougars as they faced Wayne County.  Campbell clawed back from a 1-0 deficit in its last at bat with two outs as a two-run triple vaulted the Cougars to a 2-1 lead.  But the lead didn’t hold as Wayne County came back with a couple of late runs to win 3-2 ending the CC All-Stars big post season run. 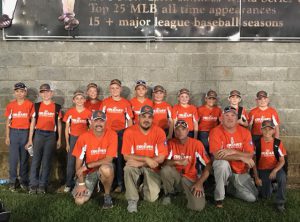 Here’s the numbers and names of the Cougar Stars: